I'm trying to create a project to measure a resitance using electronics and a MCU ADC, and i'm having serious doubts about it and i could use some advices. My first two contrains are that the measure of the resistance as to be done using an AC source and my circuit is powered with a unipolar voltage source. (3.3V)

To create an AC voltage source i will be using the MCU's PWM (at 100kHz or could be less) and a RC Differentiator Circuit. This AC signal feeds the WheatStone bridge and the variable resistor,Rprobe, varies between 1 and 100 ohms. To measure the voltage differential I'm connecting an Instrumentation Amplifier(AD623). My first question is here, since is an AC signal, i will have to power the Amplifier with a Bi-Polar voltage, i heard the i could do it with a charge pump, is it this the best solution?

And about the output of Amplifier, since i want to measure this voltage with an MCU ADC, should i rectify its output using an full-wave rectifier or should i add a DC bias through the Vref pin in the AD623?

Here it is a sketch of my circuit.

I'm looking for all kind of advices and corrections. Any question please ask. Thank you very much.

Yes, because i'm measuring the Electrical Conductivity of a liquid, which if is made with a DC voltage will cause polarization of the ions and make the measurement useless.

OK, this is interesting to know. There are several reasons to use AC to measure a resistance: for example, to null offset/drift, or to ignore various kinds of noise.

In your case, the purpose is different, it is to prevent corrosion. Here are some tricks you can use:

The easiest waveform to generate with a micro is a square/rectangle. This can be synchronized to the micro's ADC, too. So, you can do this:

Your measurement is the difference between both ADC readings. This also removes any offset/drift in your signal conditioning, which is nice. 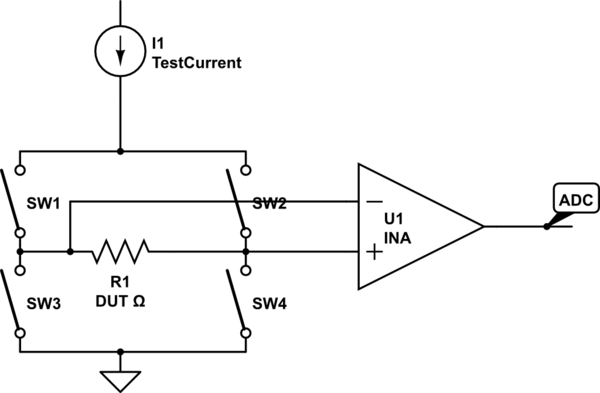 Here's an example. I'm not using a bridge here. We have a constant current source of known value (should be the minimum current to give a good enough measurement), and some analog switches (say, CMOS switches) which turn this current into AC and inject it into the resistor to be measured. These switches are controlled by the micro.

Then, an instrumentation amplifier (not an opamp) measures the voltage on the resistor while the known current flows through it. This ignores switch resistance. Also, 4-wire kelvin measurement can be used to ignore wire resistance, which would be nice if you want to measure low resistors like 1 ohm.

The INA should be a model whose output zero value can be adjusted, for example one half of the ADC reference when its input voltage is zero. Since we are interested in the difference between two consecutive measurements, the zero value of the INA does not matter, it will be substracted out as long as it is stable between measurements.

Using an INA with gain allows a low current to be used. The AC voltage and substraction of consecutive samples will reduce 1/f noise also.

I know this question is long dead, but just for reference, there are purpose-built ICs for measuring AC resistance for such applications. Check out the AD5933. It has a built-in DDS signal generator and ADC and directly outputs impedance values over a digital bus.

About your question "what is the best way to make an AC signal"... The simplest "AC signal" a sinusoidal wave, already there in your wall outlet, kind of dangerous if used directly... Use a power transformer with 120 VAC primary and 24 VAC with a center tap, that will give you 12 and 24 VAC, if you don't mind using 60 Hz. Connect it to a Variac (Variable transformer) and get anything between 0 and 24 VAC, or you can use any power transformer with a suitable secondary voltage. Reasonably precise and very repeatable anywhere in the USA. The transformer will provide the required isolation so nobody gets electrocuted (DO NOT USE THE VARIAC alone.. it does not provide isolation and can get you electrocuted).

Not the answer you're looking for? Browse other questions tagged ac resistance instrumentation-amplifier wheatstone-bridge or ask your own question.

0
INA125 single supply small weight problems
0
Negative Voltage Reference For Instrumentation Amplifer
0
Multiplexing of resistance measurements
1
What can be the reason for the extra connections from this Wheatstone bridge to the amplifier?
2
Create small variations in voltage for opamp reference pin
0
Buffering Vref on AD623
1
How to handle disconnected resistive sensor?