FPGA: How do LUT's change their logic

I've looked at a couple of posts on this topic, but I can't really get a feel to them. Does the LUT have an input where the logic address is given, or does the LUT read from the D Latch? If anyone has a picture that describes this, it would be very helpful, since in most pictures I found online, all the logic cell pictures had a LUT with no inputs, which confused me since there was no way for it to read logic. Thank you for your help!

A LUT (Lookup Table) in modern FPGAs is nothing more than a RAM. The inputs are the address lines, and the output is the data output bus. There's really nothing more to it.

FPGAs also tend to have more advanced logic modules (some vendors call them ALMs) which consist of one or more LUTs along with additional dedicated adders, high speed carry chains, and typically an optional register (flip-flop) on the output. The inputs connect to the logic routing resources in the FPGA (which are also typically just RAMs) and in some cases also have a feedback path to connect to the output register of the same ALM.

All of the LUTs are initialised at power on by a configuration file which essentially uses the write port of the LUT RAM to program it. Once configured the memory acts to perform whatever logic function it is programmed to do.

As @duskwuff reminded me in the comments, it is in many FPGAs possible to use the LUT as a RAM directly. In designs where this is the case, additional inputs to each LUT are made available which form the a write data port (typically this port is a single write data bit and a write enable bit, and the address is shared with the read port).

For a diagram of what the ALMs or ALUTs or LABs (or whatever a vendor calls them) look like for a given FPGA, you can typically find this in the documentation for the device family. Different FPGA families will have different structures.

As an example, here is the structure of an ALM (Adaptive Logic Module) for an Altera Cyclone V FPGA (taken from the datasheet on p20). I've added some annotations. 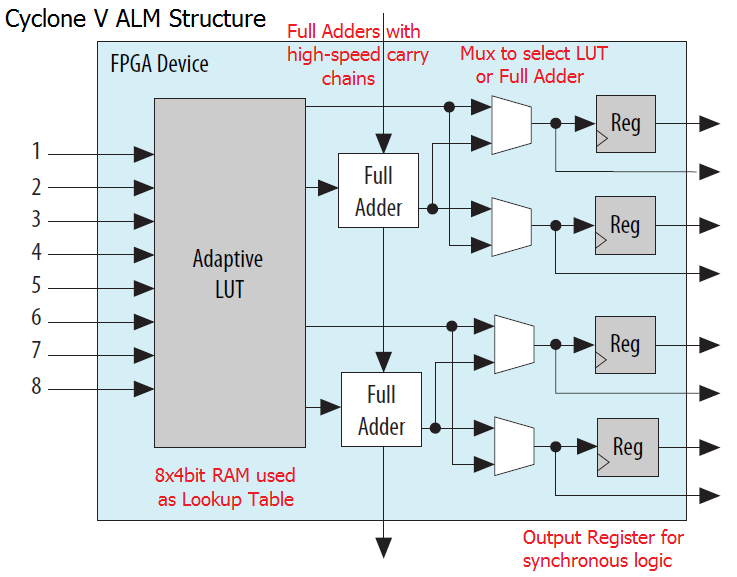 The LUT is on the right, then there are some dedicated full-adder (FA) blocks which allow high-speed multi-bit adders to be made by chaining multiple ALMs together (using the dedicated carry chain routing). Then a multiplexer to select whether or not the FA should be used, and finally the output registers.

There are lots of other signals like clocks and resets for the registers and the configuration interface for the LUT which are usually not shown on the diagrams for simplicity, but they are there.

Not the answer you're looking for? Browse other questions tagged digital-logic fpga logic-gates or ask your own question.

2
Is the theory of operation behind my FPGA design acceptable?
2
Given a gated SR latch, How do I make it a set dominant gated SR latch?
0
Turn S R Latch Using a NOR gates into NAND
6
How does a non-FPGA (ie a PC with a CPU, RAM, hard drive) mimic logic gates?
2
Earle Latch Properties
1
Number of output by decoder
0
Need Help With Transistor Logic Circuit Design
1
Designing a RAM, using 4x2 chips, with a 8 address capacity