How many amps can a car battery supply?

Googling this hasn't given me much information. I've heard numbers ranging from 30A to 300A.

That said, the normal peak current is the Cold Cranking Amps. This is the amount of current the battery should provide for starting a cold engine at 0°F. 300 to 1000 Amps is not unusual.

 Finally, each battery was “dead shorted”, connected to a “shorting circuit” consisting of a shunt (5000A+ 0.25%), Hall effect transducer [model LEM LT 4000T (4000A+ 0.5%)], 26 feet of MCM-550 cable and a knife switch. A 2 channel Fluke 190 Scopemeter with automatic triggering was attached to the Hall effect transducer and to the battery terminals. Current and voltage readings were recorded at 0.2 millisecond time intervals from 0 to 0.2 seconds. An Agilent 34970 data-logger was used to monitor the shunt current and battery terminal voltage at 40 millisecond time intervals from 0 to 30 seconds. The “shorting circuit” had a resistance of 1.80 milli-ohms, as measured with a Biddle DLRO micro-ohmmeter. The inductance of the circuit was not measured.

To determine the effect of temperature, sets of UPS12-140 (12V-33AH) batteries were float charged at 13.65V (2.275 volts/cell) for 48 hours at 2, 11, 24, 33 and 40oC in a temperature-controlled environment. OCV, impedance and conductance readings were measured and each battery was “dead short” tested using the test method described above.

In theory, with a perfect conductor you are looking at over 2000 Amps. With their test, they saw 1700 Amps. 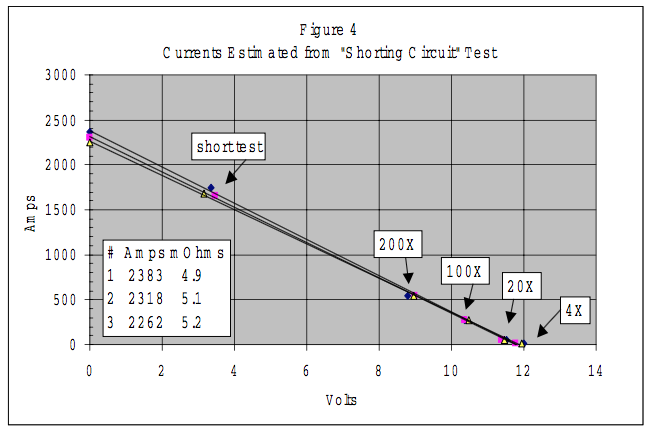 And these are just 33 Amp Hour batteries, small compared to most cars. These are UPS batteries! My car has a 150 AH battery with 750 CCA, and it's not even a premium battery.

In short, we are talking about literal Thousands of Amps for a dead short.

But any multimeter worth a damn will have high resistance for voltage measurements, and a fuse for current measurements, that should blow before you see much current flowing. But it will blow if you short it. No if and or buts about it.

Hundreds of amperes. For example, my truck has a battery rated at 625 amps. Each battery should have a rating. Many auto parts stores have the ability to test the battery for you to make sure it is putting out the correct current.

Assuming the battery and the ammeter both have internal resistances of 1 milliohm, then from Ohm's law,

The reason you're seeing such a large range is because a battery is better thought of as a fixed voltage source, not a current source. If you have a 12V battery and you're asking how much amperage can it kick out, the answer is however much or little it has to to satisfy Ohm's law, V = IR. The less resistance you have in a circuit, the more current will flow and vice versa. The absolute extreme of this would be if you had zero resistance (an ideal short circuit), then the poor battery would try to crank out infinite current to maintain the relationship. That means kaboom.

Of course, there will always be some resistance in the real world so your battery will probably only have to try to crank out thousands of amps - still kaboom.

To answer your question: How many amps a battery supplies depends entirely on the voltage of the battery and the resistance in the circuit. It is not a fixed value for any one battery or class of batteries. Even the resistance of the circuit is not necessarily a fixed value, it would depend on factors like the level of corrosion in the terminals and the temperature of the conducting wires. If you want a ballpark of how much current your battery sometimes supplies, check the cold crank amperage rating.

17
Possible causes for AAA battery to explode
2
Can an external defibrillator deliver a continuous charge?
0
Heater not heating when connected to battery - is it broken or am I dumb?
3
Using a multimeter, can I tell if a lithium-ion battery pack is brand-new?
0
Ammeter scale, not sure what my amp reading is
0
How many amperes can an alkaline AA battery supply?
1
Why is power specified in watts rather than amperes?
2
How do car battery testers work?