What are the effects of single ended signals on twisted pair conductors?

I'm currently using a cable that has multiple twisted pair conductors. I'm attempting to send a several single ended signals down some of these conductors at a frequency of 12.5MHz. Essentially, I'm only using one conductor of each twisted pair.

Will this pose any issue? The fact that there is an unused/unterminated conductor twisted around one of my conductors, will this have any transformer like effects? I have been unable to find any resources online.

Essentially, I'm only using one conductor of each twisted pair.

Actually, you're using 2 conductors. One conductor of the twisted pair, and another that you haven't specified, which returns the current, or is the reference voltage. It will be there, even if you don't know where it is at the moment.

Is a ground conductor in the cable, or a ground loop from your transmitting end to your receiving end? Or is it the other wire in the twisted pair.

If it's a ground conductor in the cable, and it's working OK to share that between several circuits without too much crosstalk, then that's OK. The other redundant conductor twisted with it sould not be too much of a problem either left open or paralleled with the signal conductor, as long as the frequency is fairly low.

If it's a random ground loop, then that's almost always bad. You need to know where your return is.

If it is the other conductor in the pair, then you will be using it at the far end as the reference for the signal, by taking both conductors into a differential receiver. This will isolate the signals from externals signals, and the pairs from each other. That's the best way to do it.

I'm attempting to send a several single ended signals down some of these conductors at a frequency of 12.5MHz. Essentially, I'm only using one conductor of each twisted pair.

Firstly, crosstalk will be an issue if you are not balancing the unused conductor in each twisted pair. This crosstalk is due to inter-pair capacitance.

To go into more detail, you need to think of a single twisted pair like a transformer (ignoring the complication of reflections). Look at this circuit: -

This shows how a single ended driver can drive a twisted pair. Note the controlled impedances Rs at the sending end. This provides a balanced impedance at the sending end. If Rs were not used in the grounded wire ("cold") there would be an impedance imbalance and noise impregnating the cable would produce a differential signal that would be detectable at the receiver.

That's the simplest proper way to drive twisted pair from a single-ended driver. However, the driver output may start to get higher impedance at higher frequencies and what people do is connect the ground end of Rs to a driver identical to the one marked "line output". It can still just drive a constant ground signal but usually it will drive an antiphase signal to improve SNR.

With the single ended driver above, transformer action in the twisted pair ensures that the signal at A is the inverse of the signal at B.

So, it's imperative that the "unused" wire in each twisted pair is grounded via Rs. This has another benefit - because the AC voltages appearing at A and B are antiphase, this will be partially true along most of the cable. This means that electric field crosstalk between pairs is also significantly reduced. This is why a cable carry several twisted pairs has the twist spacing different for each pair. It's the same reason why telephone poles swapped their wire pair positions quite often: - 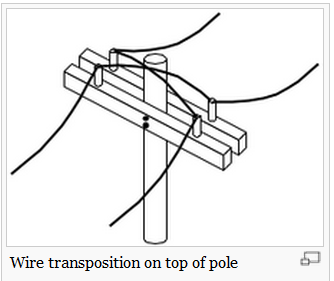 Also, because of the signal inversion due to terminating the sending end correctly, the currents down each wire in the pair are "opposite" thus, magnetic balance is largely achieved and this also cuts down on crosstalk problems between pairs.

The next problem is how you terminate the receiving end when you only have a single-ended receiver. You must terminate both ends to local ground/screen with the same impedance for all the benefits to accrue. Given that you haven't detailed your circuit I'm not going to make a guess.

Not the answer you're looking for? Browse other questions tagged differential twisted-pair single-ended or ask your own question.

0
factors influencing capacitance of a cable
0
Is It Okay to Run a Single-Ended 5V Pulse Train through One Strand of a Twisted Pair?
0
Common Mode Vs Single Ended Signals
1
What are the concerns when converting single-ended signals into differential?
0
Sending two serial signals down a single twisted pair?
4
What is the practical advantage of using mirrored signal outputs eventhough what matters is balancing the wires?
2
Can twisted pair replaced by two wires which are closely placed?
2
Effects of twisted pair in 120V AC
1
What "mode" is static electricity (lightning?) Is it common-mode, differential-mode? It seems half-way, or "mono"