Why does voltage split when an additional resistor is added?

When you have one resistor in a series circuit, the amount of voltage taken up by that resistor is 100%. Adding another resistor (same Ohms) makes that voltage drop 50%. Why, since only current should be changing, and the voltage (joule per coulomb) shouldn’t depend on current (coulombs per second)? It’s like the voltage knows that there’s another resistor (before it hits the first one) and decides to split its energy for each. But obviously that isn’t the case because voltage isn’t a sentient being, so what causes it to split its energy rather than imparting all of the energy on the first resistor as it normally would if there wasn’t another? At first I thought the answer was that the current decreases as a result of the resistors and that’s what causes the voltage to decrease for each, but that doesn’t make sense since the amount of electrons shouldn’t control the energy they carry.

When you have one resistor with 10V on one end and 0V on the other end, if you could measure the voltage half way up the resistor it would be 5V.

Now, cut that resistor in half and electrically join the ends you have just cut. It's still 5V so what's the problem?

In the case that you add another resistor the voltage is not doubled because you are implying the voltage is fixed (so it provides whatever current maintains that voltage). If instead the current was fixed (relative to the current produced by the single resistor), the voltage WOULD double.

Think of water going downstream in a pipe, at some angle. If you make this angle closer to flat, the water will flow slower. Does the water 'know' this? I am unsure, this is more of a philosophical question.

Another (perhaps useful) explantation is via the electrical field / potential.

A charge flow in a resistive material can only be established if you have a potential gradient which equals an electrical field. (induction let aside). Imagine having the full voltage drop over your first resistor and 0V over your second. This would lead to no electrical field in the second one thus preventing the flow of charges in the second resistor, which effectively prevents any current. This is contradicting the voltage drop over the first resistor.

In fact by assuming a voltage drop of 10V over the first and 0V over the second resistor the field equations get unsolvable.

If you put it the other way round, we can make an experiment: Take some homogenous resistor material with some dimensions: A=cross section and l=length. The resistor material is connected by two metal plates with area A on both sides and voltage is applied. The resulting electrical field is (nearly) as homogenous as in vacuum with the difference that in between the plates there is a (bad) conductor with a specific conductivity. A current density will form on every point of the conductor and only defined by the field and the conductivity. If you integrate the current density over A you get your current.

Now slice the resistor block halfway of l (area is again A), and insert an infinitesimal thin layer of a perfect conductor. As the field was normal to this cross section before you inserted the conductor, nothing will change by doing this. So you can perfectly assume that the voltage potential at this inserted conductor plate is the same as in the untouched resistor at the same position. If you measure the voltage relatively to one of the outer plates or integrate the field from one of those there will be half of the full voltage.

Now you can increase the thickness of the intermediate conductor. If it is an ideal conductor, the electrical field inside it is zero. So it makes no difference how thick you let it grow (i.e. we make a wire here). The field keeps being split into the two parts and keep the same value (in V/m) as in the undivided resistor. But in those half resistors there's only l/2 left and from before we know, the voltage is half the voltage of your source.

You may say: "But I added another resistor of the same value instead of splitting mine into half" The answer is: Repeat the building of the resistor with a material with half the conductivity. The electrical field will stay the same and the current densitiy will be half the old value. But there can't be any difference in voltages, because they do not depend on anything but l and the voltage source in our experiment.

You are right, the voltage source doesn't know how many resistors there are in the circuit or which arrangement they have (series, parallel, a combination of both). What the source really sees is the 'equivalent' resistance.

You have been presenting an example of two resistors in series, of the same value. To the source, it looks as if there were only one resistor, that is, \$R_1\$+\$R_2\$. If there were another arrangement, the source would still 'see' just a single resistance, which is the equivalent of whatever circuit you have.

In a case where \$R_1=R_2=4\Omega\$ and they are in series, the source sees this as a single \$8\Omega\$ resistor. What determines how much voltage is being drop across each resistor is the current.

I infer that you want to know why the voltage drop changes when you 'suddenly' add in another resistor to a circuit. The thing is that the current changes in a series circuit, and therefore the voltage drop as well (\$V_R=I*R\$). 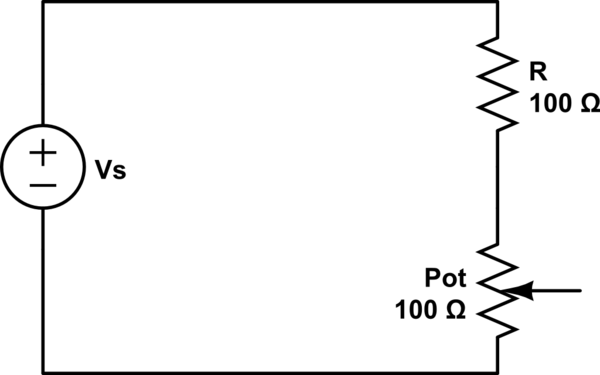 Or by using Ohms low: $$ Voltage = Current * Resistance $$ Because your current is halved through the resistor, so is the voltage.

Not the answer you're looking for? Browse other questions tagged voltage resistors ohms-law or ask your own question.

2
From node to node, do units of charge lose energy over a constant period of time?
8
Why does capacitor voltage lag current?
5
Ideal Op Amp and its Input Voltage
2
How does voltage know
1
Can the the rate of the flow of electrons (current) remain the same even though the number of coulombs differ?
0
Is the "Volt" a measure of force or energy consumption?
1
Confusion about relationship between energy per coulomb, and the amount of coulombs in current