Different voltage drop in serial and parallel circuit with resistor

How is this voltage difference possible? I am aware of the Ohm's law, but it still doesn't make any sense to me. In my mind, a resistor can't change it's resistance, it's 10k Ohms no matter what.

Q: How is it, that I get different voltage after the resistor, depending on how the LEDs are wired? Why isn't resistor's behavior constant?

Q: How is it, that I get different voltage after the resistor, depending on how the LEDs are wired? Why isn't resistor's behavior constant?

Looking at Figure 1b you can see that the same current goes through all the elements in the circuit. 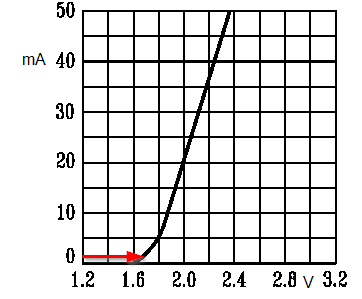 We can see from Figure 2 that the 1.65 V reading you are getting across each of the LEDs is correct.

Now what happens when you connect the LEDs in parallel? We will still be limited to a maximum of 0.9 mA through the resistor but now this has to split two-ways through D3 and D4. They will get about 0.45 mA each. Checking back to Figure 2 we can see that they will still drop about 1.6 V or so.

[From OP's comment:]Going back to analogies, I often see circuit being described as tube, current is the water in it, pump is voltage and garden hose is the resistor, lowering the voltage and limiting the current.

The water analogy is not great, but let's try. To resemble an electrical circuit the water will have to flow in a closed loop such as a hot water central heating system. The hot water pump raises the pressure at the outfeed of the pump (the battery raises the voltage). We feed through the pipes (the resistor) to two check valves which piped in series or in parallel. 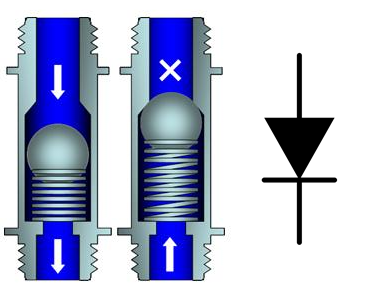 Figure 2. The check-valve is the plumber's diode. Water can only flow one way. A certain pressure is required to overcome the spring. This causes a pressure drop across the valve but once the valve is open the pressure drop doesn't change much even at high currents. Source: Modified from Gentec image.

Now let's put some numbers on our system. The pump raises the pressure to 9. (Think psi, bar, pascals, inches of mercury or whatever you like.) The valves will open at 1.65. If we pipe them in series as in Figure 1b it should be clear that if the valves open the pressure reading at the top of D2 will be 1.65 and above D1 it will be 3.3. If we connect them as shown in Figure 1c they will both open when the pressure reaches 1.65.

1) Why, when in a series, doesn't first LED consume 2V and the second LED is not left with just the rest?

LEDs and resistors don't "consume" voltage in the same way your hose doesn't consume pressure. Voltage is dropped or "voltage decreases" across the resistor or LED in the same way that pressure losses occur in the water system.

2) When you say across the resistor, you mean this is the current inside it, but after it, it gets lowered by the LEDs themselves, because they are also, in fact, resistors, and that's why they get 0.45mA each, instead of the 0.57mA?

While they have resistance we do not call them resistors because they are non-linear just as the check-valve is. Also the current doesn't "get lowered" because what leaves the battery on one terminal must come back on the other.

I hope that helps.

It has to do with the logarithmic nature of the current vs. voltage in a forward biased diode.

You are underdriving the LED's, in both situations. So the diodes are barely turned on. They probably need more like 5-15mA each.

Let's take a look at each case.

In both cases the current is very low.

To prove this to yourself, start with basic diode equation:

You can see that it takes a large increase in current to increase the voltage much. Also check out this plot for a random LED.

Let's just plug in our numbers from before (hard to see difference):

This is a very low change in voltage. Since it is a random LED (I just googled 'logarithmic LED current voltage' it obviously will not match your numbers. But the trend will be similar among all diodes. 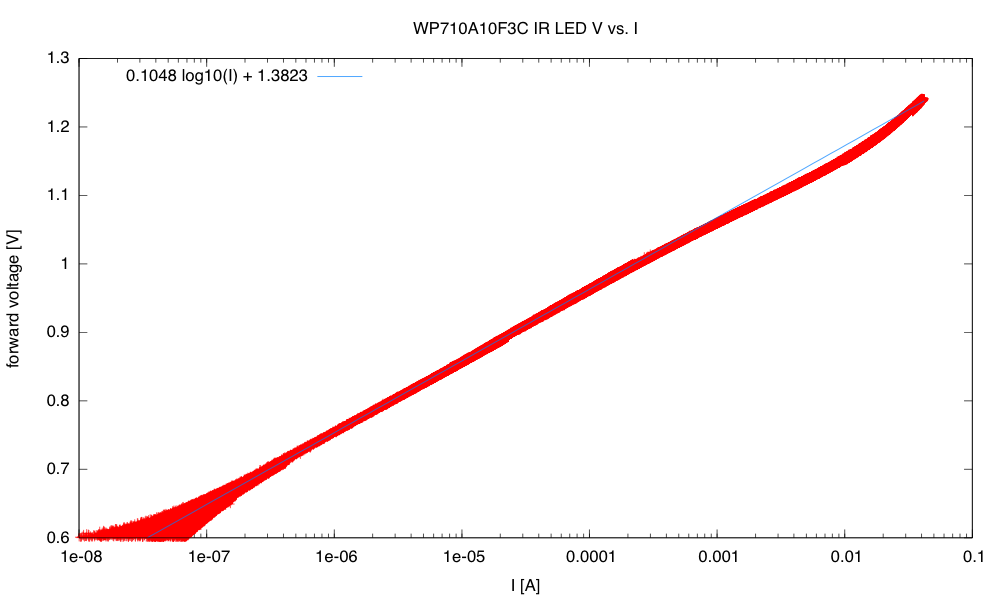 You are looking at the wrong element in the circuit as to why the voltage is different at that node.

The LEDs themselves are the ones with "adjustable resistance", the resistor is constant but your LED configuration is changing, and LEDs are non-linear devices (meaning they can change depending on various factors).

The 3.3V after the resistor is the two LEDs forward-voltage drops in a row, when the LEDs are in series, and the 1.65V is a single LED forward drop. I assume these are red. One more thing - 10k Ohms as the ballast resistor is very high, so they should be very dim indeed. I don't know why you chose that, but if you wanted to see brighter LEDs, use a resistor like 1k or 1.5k Ohms.

The resistor remains the same resistance but the way you configure the LEDs changes the load, and therefore the current through the resistor changes which is how you see the voltage difference. When LEDs are in series, they share the same current and their forward voltages combine. If you were to calculate what resistor to use for a set current, you use the remaining voltage between the supply and all of the series LED voltages (9v - 3.3v = 5.7v) and use Ohms law to solve for a required current. Lets say 5mA is the target current:

If you had the two LEDs in parallel, you know their forward voltages in parallel are "the same"(this is not actually true, it's based on manfacturing tolerance, temperature, etc), so you say the voltage at the node is 1.65V. If we want 5mA going though each LED, you need 10mA through the resistor, and then hopefully LEDs will equally share 5mA each. The resistor in this case, is found like so:

When a LED is forward biased, it has a roughly constantly forward voltage drop. In your case, that's roughly 1.65 Volts.

When the two LEDs are in parallel, there is a 1.65 volt drop across either or both LEDs since they're connected to the same two points. With a 1.65 volt drop across the LEDs, that leaves about 7.35 volts across the resistor. Using Ohm's law, we can compute that about 0.7 mA will flow through that resistor. It will roughly split with half going through each LED. That's pretty dim.

With the two LEDs in series, there is a 1.65 volt drop across each one. That leaves 5.7 volts across the resistor. Using Ohm's law, we compute that about .5mA will flow through the two LEDs (all the current flows through both LEDs.) Sadly. .5mA is still barely enough to light an LED.

To get more current to flow through the LEDs, you need to use a smaller resistor.

Not the answer you're looking for? Browse other questions tagged voltage resistors serial parallel or ask your own question.

152
Why exactly can't a single resistor be used for many parallel LEDs?
13
How does the current limiting resistor for an LED affect current and voltage drops?
-1
How does forward voltage work?

4
LED Voltage Drop in Series
4
How to calculate current and voltage draw of a single resistor circuit?
0
Connecting resistor in LED parallel circuit
0
Is resistor on LED's necessary after voltage drop?
0
Help understanding resistor placement in 741 voltage reference circuit
1
Voltage level translation between +3V and +3.3V
2
How to solve a LED-resistor parallel with a resistor?
1
Ohm's law and the voltage drop across a resistor
0
Using voltage divider with appropriate resistor calculations to give +/-1V signal a 1.65V level shift
2
LED with built-in resistor and voltage drop