How does this temperature alarm circuit work

Casn you please help me understand how this temperature alarm circuit works? I am a bit over my head here, but I would very much like to understand this.

If you would like to look at the multisim file it is here: http://www.3sixty-solutions.com/mystery.zip

It is supposed to trigger alarms (red LED) for temperatures above 100F or below 50F. I have no idea how to prove this, but I can move the slider on the thermistor and see that from 34% thru 68% the green LED is activated. 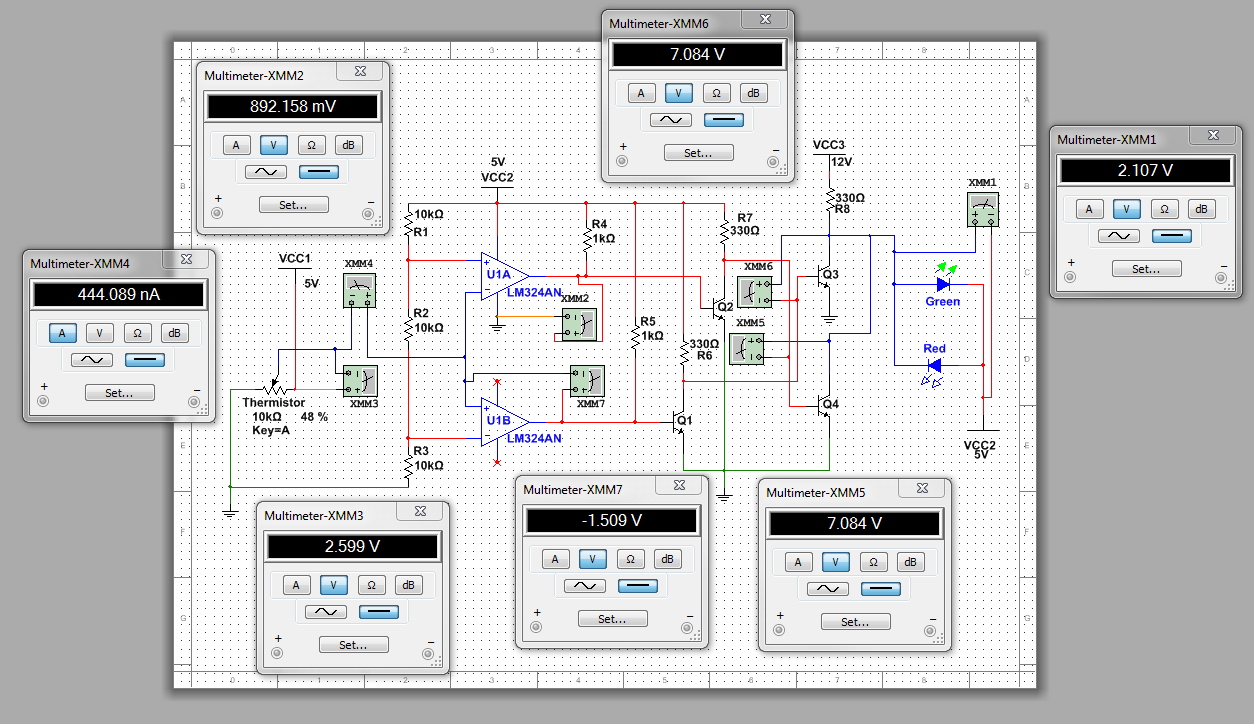 In your schematic, a potentiometer is used to simulate the voltage output.

The two operation amplifiers act as comparators and give 5V when the level at the +-terminal is higher than that of the --terminal, otherwise they give 0V.(If they are rail-to-rail types. Otherwise they don't reach 5V or 0V exactly, but this doesn't matter here.)

For example, the upper OpAmp gives 0V when the output voltage from the thermistor exceeds the threshold. This opens Q2 and this in turn closes Q4. So, the left side of the LEDs is connected to GND, and since the right is at VCC2, the red LED is on.

The lower OpAmp does the same, but turns the red LED on when the voltage is below the threshold.

When the voltage is between the threshold levels, Q3 and Q4 are open, so the left side of the LEDs is connected to VCC3=12V, and the green LED is on.

To avoid confusion: I treat transistors like switches. They must be closed to conduct current (Others see them like doors: must be open)

Finally, I agree with the comments: Remove all multimeters and clean up the schematic. The circuit is quite simple, but the schematic is confusing.

where would I measure it to prove that? Also, I am still not clear as to how I prove what the temperature range is where the circuit would trigger the green LED. Is that specific to the thermistor or is there a formula I could use to figure it out? e:

As said, typical thermistors are just resistors with temperature-dependent value. One class of thermistor is the NTC, and their behavior is described for example by the B-formula:

And the OpAmps compare that voltage to the voltage at the node between R1 and R2 as well as R2 and R3.

We can't tell you more, because the schematic doesn't give a hint how the voltage depends on temperature.

Not the answer you're looking for? Browse other questions tagged operational-amplifier temperature trigger or ask your own question.