I need to build a power supply that delivers high currents of 2500 Amps or greater. A common circuit design that has been used to deliver this high current is shown below.

This circuit design works by charging regular capacitors (only one is shown, but there would really be 10 capacitors- two parallel sets of 5 capacitors in series) and discharging them with a trigger pulse and SCR. Protection diodes are used to make sure the capacitors are protected from current going the opposite way. A system of relays (only one switch is shown) can also be used to charge and discharge the capacitors effectively.

However, I was wondering if this design shown below would be an alternative that could provide just as high currents. It would be easier to build this design as I would not need the SCR and trigger pulse circuit. The SCR is hard to get without spending a lot of money, since it needs to have a rating of at least 5kA for a single pulse or 1000A continuous. 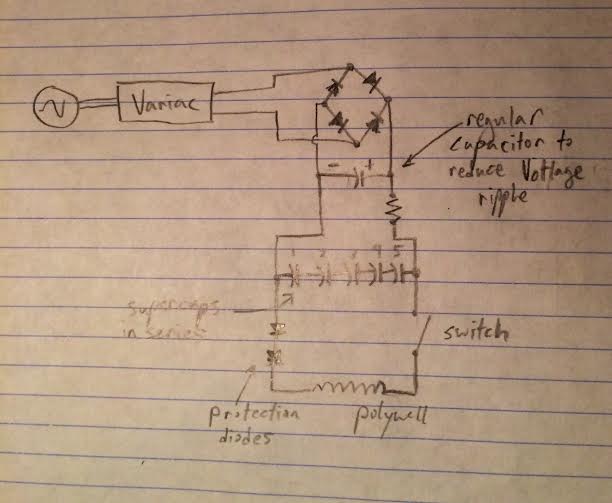 In this circuit it is similar with the Variac and full-wave rectifier to produce DC output current. The DC output would be smoothed with a regular capacitor if necessary for charging the supercap bank. I would keep a voltmeter across the supercapacitor bank to know when they are fully charged. When the supercaps are fully charged, a switch would be closed and the high current would enter into a low resistance circuit with protection diodes to prevent from current flowing the opposite direction. I already have a Variac with a output of 30A anywhere between 0-100V. I would probably turn the voltage lower to not hurt the supercaps which will be rated at lower voltages. I also have the rectifier with high current diodes rated well above the Variac input.

Is this circuit design feasible? I read that supercapacitors can discharge high currents and are not damaged by it, nor would they need the SCR trigger pulse component to get the high current discharge. Would this design be feasible?

*Note the Polywell is what this power supply is being used for; it is essentially just inductor coils used to create strong magnetic fields.

No, this will not work. It may also kill you.

The SCRs you're looking at are expensive because 1500A is an immense amount of current. Mechanical switches capable of safely switching this current will cost even more, if they exist at all.

Additionally, as noted in comments, the "protection diodes" in your circuit appear to be backwards. Even assuming that this is a mistake, it's unclear what their purpose is, and they would need to be rated for at least 1500A as well if they were included.

Not the answer you're looking for? Browse other questions tagged high-current supercapacitor scr or ask your own question.