Why many (resistor - LED)s connecting in parallel, current of each LED is not stable? 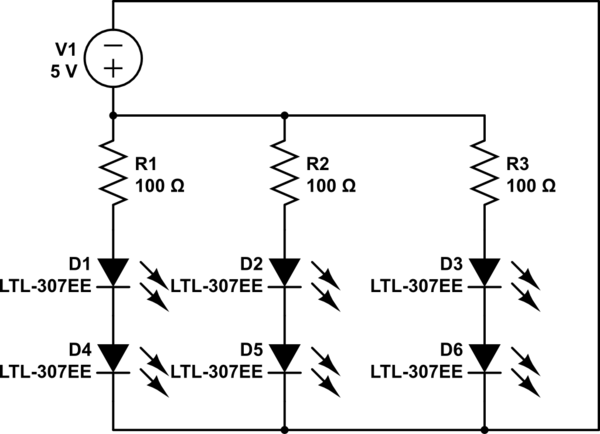 Edit: Power supply is Apple iPad(second model) Charger. LED's color is red. 'unstable' here means 'brightness goes up and down'. There is no shutdown. And unstability is not severe. I can observe it only when in darkness(all other lights off) and the front of LED.

Edit(2): I tried other power supplies(phone charger(5V 1.2A), 3x AA alkarine battery) but result is same

Simple: Because your power supply can't reliably deliver the current for the high number of LEDs.

The current through a single LTL-307EE is, according to the datasheet of that LED, 20 mA. Hence, 40 branches will draw a current of 0.8 A.

Note that the resistor you're using isn't really the optimal choice for maximum brightness, here – at 20 mA, it should drop 1V, but instead, it drops 20 mA * 100 Ohm = 2 V, so you end up with significantly less current – it's hard to say, because the I/V curve of a diode is nonlinear, but you're probably getting half as much brightness as you could. Try using 50 Ohm! (Hint: two parallel 100 Ohm resistors form one 50 Ohm resistor)

When you draw more current than what your supply can deliver, power supplies must drop their voltage – that's a physical necessity.

2
ATtiny25 PWM LED driver with brightness control
3
LED wiring questions with 9v battery as power source
6
Why is PWM used to control LEDs even when they're only used On or Off?
2
how to get the RGB value of a color using phototransistor or photodiode?
4
How can I stop the flicker of LEDs?
1
Solid State Flasher controlling other Relays
0
LED modulated @ high voltage -vs- constant @ low voltage
5
Understanding “Current Draw” in terms of “Ohm's Law”