How do I realize a transfer function with multiple zeros?

I designed a compensation function for a control system in Matlab and now I'm trying to figure out how to build it using op-amps. I thought I might be able to use a couple of Sallen-Key amplifier topologies, but I'm not sure if it's possible (my algebra skills are dusty). Alternatively, is there any other topology that can realize this form: $$(As^3 + Bs^2 + Cs + D) / (s)$$

A Sallen-Key filter is as follows:

My gut tells me that I can put some capacitors in \$Z_1\$ & \$Z_2\$ and resistors as \$Z_3\$ & \$Z_4\$, then re-arrange the equation in such a way that it gets me close to what I want, but I'm having trouble doing the algebra. I will definitely need two-stages with this approach to achieve the 4th order transfer function.

In any case, I would appreciate some help in designing this circuit.

The answer, before the interesting diversion:

A PID + a second derivative will do the trick: 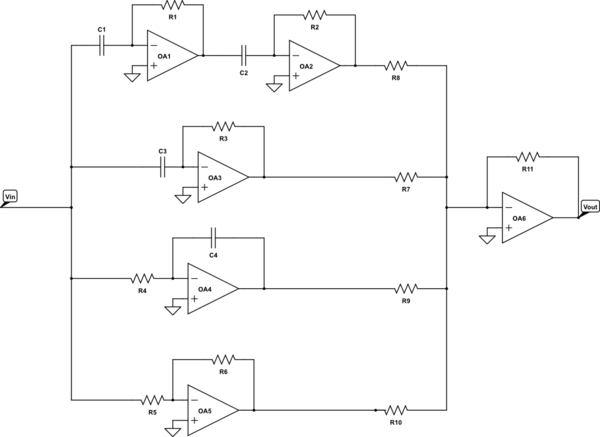 Which matches your transfer function of:

If you would like to reduce the number of op amps, you can combine the PID op amps into one using the information from this article.

Here, \$p_1\$ and \$p_2\$ are extra zeros. Ideal PID controllers don't have either, "filtered derivative" PID controllers only have \$p_1\$, and "type 3" PID have both. See the article for more information.

You can work out the necessary values.

Now for the fun diversion:

So, I think that @Vladimir Cravero is correct, a transfer function with more zeros than poles is unphysical.

Physicists will think about this in terms of susceptibilities in the complex frequency domain (equivalent to what EEs refer to as transfer functions in the Laplace domain), and the Kramers-Kronig(KK) relations, however this can be extended to the [laplace domain](see appendix A) as well.

However, we require that \$h(>0)\$ is \$0\$, otherwise the transfer function is reacting to stimuli that hasn't happened yet. Making sure that this requirement is obeyed is done by making sure that such a function obeys the KK relations in the Laplace domain.

The KK relations have two requirements:

These requirements make sense: we can't have any sort of gain for infinite frequency for any real system (energy conservation requires this), and any poles in the right half-plane would also lead to energy conservation violations, finite inputs would lead to infinite power eventually.

Given these requirements, the Kramers-Kronig relations give us a relationship between the real and imaginary parts of the transfer function:

Ultimately, doing this integral isn't actually that important, but we need to make sure that the transfer functions obey the requirements of the KK relations.

For a system where there are more zeros than poles, it is pretty trivial to show that this doesn't hold.

But wait! While @Vladimir Cravero is ultimately correct, realizing a physical transfer function with more zeros than poles is not possible because we would break causality, @Chu is also correct, this is done all the time with PID controllers. What gives?

Not the answer you're looking for? Browse other questions tagged operational-amplifier filter circuit-design transfer-function feedback or ask your own question.