Is there a device that converts any AC frequency to 60 hz?

As noted by several people AC->DC-> AC is the easiest way and would be the most normal.

Cycloconverter - Olde tech system - something to think about for the more technically informed.

However, if your wind-turbine AC frequency is always high relative to AC you can get a moderately good result by using what is known as a cyclo-converter.

This is an option that I have not heard of being used in the domestic WT market and which is usually associated with high powers or Olde technology BUT
a Cycloconverter could be extremely easily implemented at good cost in the 100 Watt - 30 KW size range with modern electronics.

It is stated in a number of places on web that Honda use cycloconverters in some of their portable motor generator units. This is not certain but may well be true as this would allow them to use high frequencies with consequent reduced size magnetics and would also allow a degree of frequency stabilisation. I had noticed the very small size of their units wrt power levels and wondered what magic they had worked.

A cycloconverter takes the available waveforms and compares them to a reference desired output waveform. It then draws power from the waveform that is closest to what is required.

Waveform distortion obviously occurs but if the relative frequencies are high and multiple phases are available, quite modest output filtering may produce an acceptable result in many cases.

The diagram below shows basic operation with 3 phase in and 1 phase out. A major advantage is that because input and output float relative to each other, and given input phase can be instantly inverted in polarity relative to the output if requried. This significantly increases the number of waveform segments to choose from and thus the available spectral purity for a given input:output arrangement.

Multiple input phases are required to choose from - the more the better. As WT's often have 3 phase output and may have more this method may be a good match to the requirement. (The available number is effectively increased by polarity inversion - see below). 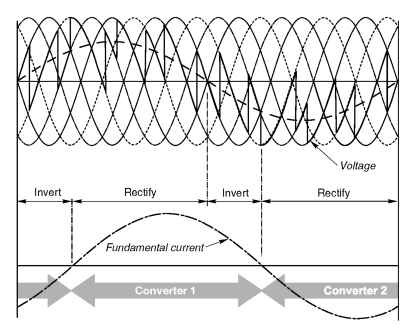 This is very B.O.T.E. but seems OK - Variable input frequency is easily handled with some effect on spectral purity. As long as rate of change of frequency is small compared to frequency this would not be a major problem. Typical loaded rotor inertias would usually make this not an issue. eg in the diagram above fin_3 phase is about 3 x Fout_1 phase. The shortest time period between switchings is about 10% of fin. The longest is about 25% Fin. If fout = 50 Hz then time period of longest segment ~~= 1/(50 x 3 x 10 ) = < 1 mS. WT prop at say 3000 RPM = 50 RPS = 20 mS per rev = 20 times longest segment . Blade inertia needs to be such that blade speed does not change vastly over say 1 revolution. If WT rotation rate doubled in 1 second (wow) then speed would change by ~= 2%/revolution = OK.

Note that the above deals with frequency but not Voltage changes. In many cases an AC-DC-AC system will be preferred due to tye freedom i gives to alter bith frequency and voltage.

Images linked to pages. Many many many ...

You need to rectify the power to DC, then use an inverter to generate your 60Hz waveform.

Aside from the standard rectifier + inverter solutions, and cycloconverters, there's also the less well-known matrix converter (these have a matrix of switches to connect any input to any output), which, like rectifier + inverter, uses power electronics to convert from one AC input to another, but without a DC link in the middle.

Convert the output of your AC windmill generator to DC. Then feed the DC into a GRID-TIE inverter.

You can purchase a grid-tie inverter most anywhere that supplies solar panels and wind generators.

Another cheap source of grid-tie inverters is eBay. I purchase several 250 watt units for less than $80US. They come in much larger sizes also but I decided to break my large system into several smaller systems. That way one single failure would not cause the entire system to fail.

"A grid-tie inverter (GTI) or synchronous inverter is a special type of power inverter that converts direct current (DC) electricity into alternating current (AC) and feeds it into an existing electrical grid. GTIs are often used to convert direct current produced by many renewable energy sources, such as solar panels or small wind turbines, into the alternating current used to power homes and businesses."

N.B.: "Note to SYSOP" removed, such messages should go into Meta Electronics not into answers.

Not the answer you're looking for? Browse other questions tagged frequency ac generator or ask your own question.

1
Generator speed, and power output. Frequency
2
Running brushed universal motor at different frequency than designed
2
60Hz to 50Hz frequency transformer/inverter?
1
Is it possible to convert a low frequency signal into a higher frequency signal?
0
How do power generators generate AC at a constant frequency?
1
How does using a 60Hz device on a 50Hz supply affect it?
1
What frequency do BLDC motors generate?
2
Converting power and speed of a bike axle
0
How can I size the components of a square wave generator in order to obtain a 7kHz frequency?
0
Electric frequency conversion from very low frequencies