I have got an old transformer with multiple secondary taps with the ratings shown in the following figure: 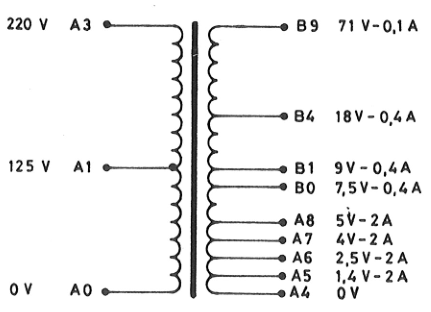 I plan to put the transformer in a suitable case and connect the secondary taps to binding posts. This apparatus would be used for conducting some experimentation with AC currents, so it would be susceptible to some degree of abuse. Therefore I'd like to protect the transformer from short circuits and gross overloads.

Of course on the primary side I'll put a switch and a fuse, to avoid catastrophic failures. However I'd like to have a more lenient form of protection on the secondary side: replacing a fuse any time a secondary tap is shorted (or overloaded) would be a real hassle in a lab context.

What kind of simple and cheap protection measures can I adopt in this case? I thought of putting a suitable rated polyswitch (i.e. resettable fuse) like these in series with each secondary tap, but I never used them and I cannot say what kind of problems they could present and what parameters to consider in the design.

Is my idea a sensible one (for example, do polyswitches reset themselves reasonably quickly after an overload event -- I'd like to be able to recover in a couple of minutes, at most)? Are there alternatives which are comparably cheap and simple to implement?

To sum up my requirements:

I worked with PTC resettable fuses for many years. They act quickly but do need 15 to 30 seconds or so to cool off enough to conduct current again-it depends on its mass. Their worst enemy is being in a circuit that can source enough voltage to arc internally and destroy the PTC fuse.

The second issue is that it is important to know for certain the highest sustained current to be consumed, compared to a gross over current that would damage a device or the transformer. This helps make sure the PTC fuse will survive an overload yet also reset when the current drops to a safe level.

They cannot be used where high surge currents or high voltage spikes are the norm. Use MOV's to clamp down any chance of voltage spikes do to back-EMF. Use in-line fuses if there is a chance of surge currents much greater than the expected maximum current, which may originate from a charged capacitor or intense back-EMF from a high value inductor.

When shopping for PTC fuses pay close attention to the spec sheet, and you will be able to count on them as expected.

This is not a complete solution and does not satisfy some of the user requirements. I offer it as a suggestion which may prompt some other solutions.

An MCB (miniature circuit breaker) on the 0 V line seems the simplest option.

The secondary current will (should?) be higher than the primary. If a dual-pole MCB is selected to suit the 0 V max allowable current the second pole can be used to interrupt the primary as well.

Not the answer you're looking for? Browse other questions tagged transformer protection or ask your own question.

4
How do I safely drive a 500W inductive load with a computer power supply and suppress voltage spikes from switching?
4
Transformer with 3 secondary taps
3
Help designing an inverse polarity and overload (crowbar) protection circuit
1
Removing neon transformer center tap?
2
Where/How should I fuse this transformer?
0
How can I electrically switch between taps on a transformer?
0
How to identify/measure a power transformer using signal generator and scope
6
Small step down transformer fuse, primary or secondary?
1
How to reduce transformer secondary voltage?
1
Is this the correct way to wire my transformer?