Choosing a touch screen type for a project

I have a project that I have to choose a touch screen for. I have done some studies on the different type of touchscreens. I would like the screen to be:

As far as I can tell, there's still no technology out there that can satisfy both criteria. But maybe I'm missing something. Or maybe there're some software workarounds to make either a resistive or a capacitive touchscreen to work.

Sounds like you want an infrared touch screen. The concept is pretty simple - a grid of IR emitters and receivers in the X and Y directions detect breaks in light corresponding to a touch (pictured below) 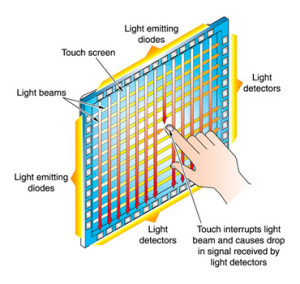 Because it doesn't work on contact electrical phenomena, you can use pretty much anything to break the beams including a gloved hand, a pen, your cat's paw (cat willing, of course), etc. Moreover, it's inherently multi-touch capable.

Infrared-based touch screens are also neat because the infrared sensor frame and screen can be discrete, so if the screen is damaged, you only need to replace it and not the touch module (and vice-versa).

Now, as to whether or not this is a desirable, feasible, or cost-effective solution is arguable, but if your requirements are rigid and you absolutely need a touch screen, then it may be your only turn-key option.

An alternative to the grid-based IR touch screen is one which uses "Frustrated Total Internal Reflection" whereby infrared light is projected within the display itself and "captured" via total internal reflection. A touch (or multiple touches) on the screen causes light to scatter from within the screen to a detector that captures the touches. This schema is depicted below: 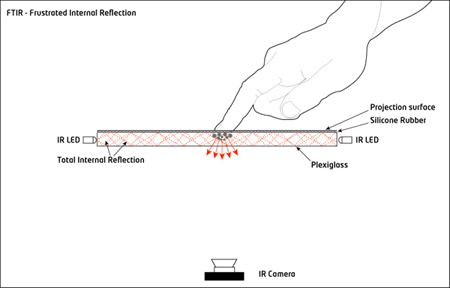 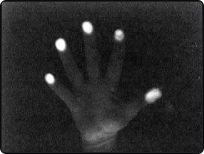 The concept is simple enough that there exist a number of guides explaining how to build your own multi-touch display at a relatively low cost. For example, the source of the images above links to a wiki with instructions on building your own, and a cursory search on Instructables turns up 4 projects with instructions. Handling things like palm detection, gestures, etc., becomes primarily a software and image processing problem at that point.

Unfortunately I can't tell you the names or what specific types of touch screen would suit your purpose, but I can show you some ideas as to how to "invent" a touchscreen that will suit your needs. 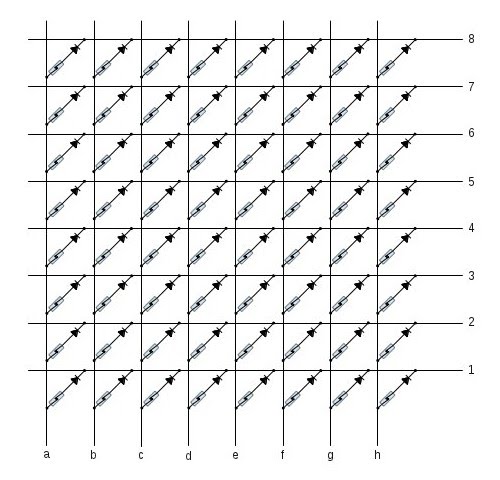 Though I don't believe technology is advanced enough to do that without the touchscreen look fully transparent to the naked eye.

In a normal resistive touch screen, there is the outside layer which is scratch resistant. Stuck right beneath that is a conductive and transparent material which is attached to one wire that goes into the touch driver controller. Then there is the small air gap.

Now the following is the part that differs from a normal resistive touch screen.

Instead of having an equally resistive (and transparent) surface connected by many wires around it (that goes into the touch driver controller) underneath the air gap, you have a normal capacitive touch screen instead (like a normal smartphone and connected to the touch screen driver). And bingo you solved the conductive-touch-only barrier.

Not the answer you're looking for? Browse other questions tagged touchscreen or ask your own question.