Strange behaviour of a LED bulb via SSR Relay: it's EMI?

I've just discovered a strange behaviour of a LED bulb (E27, 220v/AC) that I'm currently turning on/off via an 8-channel SSR relay. Such a relay module is powered with a switching power-supply, powering both the relay-module and an Arduino MEGA 2560. I also have a wall-push-button connected to an INPUT_PULLUP PIN of Arduino (one side) and to GND (the other side). Another OUTPUT PIN of Arduino is connected to the first channel of the SSR relay module (to handle the SSR connected to the LED bulb).

As for Arduino, I choose to power it trough the Vin.

As for GNDs, both Arduino and the relay module get the GND from the power-supply.

A very rough schema is reported below (please, don't blame me for missing details. As for the driller, please ignore it for a moment!): 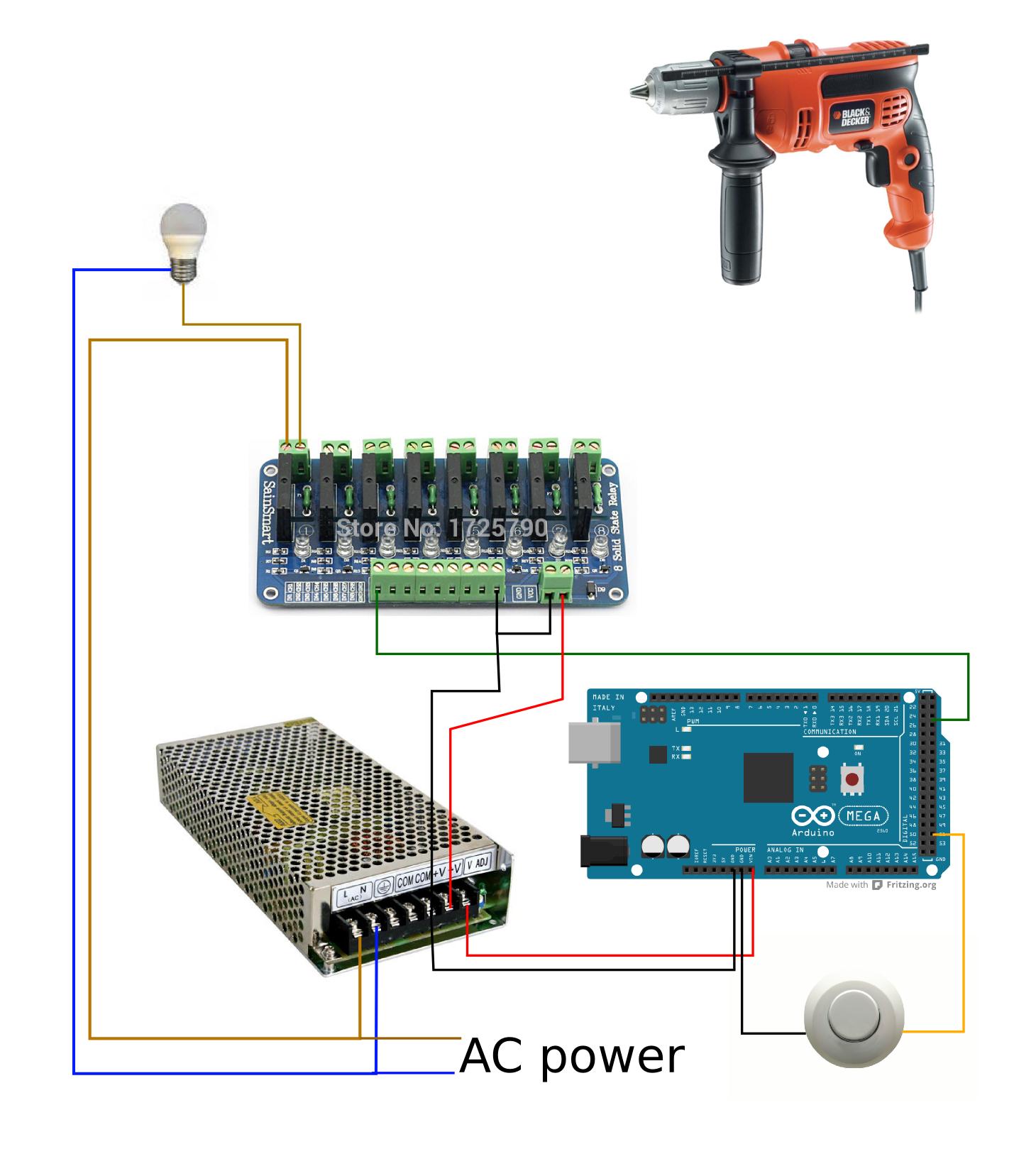 Such infrasctructure worked flawlessy for weeks, being powered on and correctly responding to push-button clicks without any issues.

Recently I needed to make an hole to a wall, actually a couple of meters away from the LED bulb, and at least 5/7 meters away from Arduino (Arduino, the relay module and the power-supply are located close to each other, in a box, under a staircase).

To make the hole I used an AC-powered driller (not a battery-powered one). Actually, it's exactly the driller you can see in the image above).

What happened was that.... the LED bulb "flashed", with a real quick "turn_on"/"turn_off" cicle. A single quick cicle.

This phonomena seems to be related to the "start" of the driller engine, more or less when the brushes inside the driller fires up some sparks (BTW: I'm supposing my driller is using brushes, inside).

I've spent some time investigating EMI, as electrical motors are known to be source of EMIs.

What I learnt so far is that:

There are lots of things that I still need to investigate (starting from using "shielded" cables, as for the connections between Arduino's PIN, push-buttons and relay modules) but... point 3) above makes me think that I'm missing some bigger problems: can the 10 meters long electrical wires between the LED bulb and the AC power source, acts like an antenna so to catch so much EMIs to "flash" the bulb?

Can someone help me in understanding what's happening or, eventually, which is the proper "troubleshooting process" that I should put in place to (try to) solve this problem?

A final note: should you want to check by yourself the "phenomena", feel free to give a look to this MP4 video (22 seconds for 5.6MB), where I asked my son to "shout" as soon as he saw the "flash" (that I cannot see, as I was close to equipments, slight far away from the room). The driller engine is, also, clearly audible.

Try to use 1K pull-up resistor with button, internal pull-up might not be enough to hold HIGH level with stronger EMI nearby.

Also set unused pins to INPUT_PULLUP mode (or OUTPUT) - they're floating after reset and it catches all kinds of interferences (if it's not a problem here it usually causes much higher current consumption by MCU).

LED bulbs have internal circuitry especially if it is dimmable. A snubber works to limit back EMF. Try a snap on ferrite on the power supply to the bulb. Experiment with placement until you can isolate where the interference is originating from.

On the line going to the bulb and then work backwards. Power supply lines (drill and SSR module), interconnect between the power supply and your aduino and peripheral board. This can be time consuming and daunting without the use of a spectrum analyzer to pinpoint the radiate emissions. LED's work on low voltage and current so I really suspect noise entering the bulb either through the power lines or as radiated RF.

I do not know what kind of electronic testing equipment you have. Basically you will want to put a low pass filter on the power line tuned between the primary frequency and the second harmonic. Better would be to put a band pass filter at the power line frequency, a tuned circuit at the power line frequency. But that is a real pain to get adjusted properly without a frequency counter and the lower frequencies are probably not causing the problem. Ferrite are fine, but put many turns of wire around and through the ferrite to increase the inductive reactance. If you know a ham radio operator, you can ask for assistance in choosing the components for a good filter. The ham may even have the diagnostic tools to help diagnose and fix the problem.

0
Should I use a snubber or solid state relays on a 24 vac circuit?
1
How to switch a 220V AC electric bulb using a relay through Arduino?
1
LED emergency lighting - relay activated
0
High Power LED and relay with the same power supply
0
How to power an 220v AC bulb from 1.5v dc from an LED
1
filament led bulb inrush current
0
Choosing correct relay for LED power supply rating
0
Advice for Switching High Current Motor (Relay vs. SSR vs. Mechanical Switch)