I would prefer to use oscilloscopes and use them to integrate V(t)*I(t).

What is the most practical way: * Using shunt resistors? But, it seems, the lowest ones are 50 uOhm and then I need a preamplifier, which increases complexity. Or, if I increase resistance, then the measurement itself impacts the measurement. * Hall effect sensors (Allegro etc.). But, they do not seem to be geared for accurate measurements? * Something else.

Thanking in advance for any clues.

You certainly won't measure to 1% with an oscilloscope, and you'll find staying within a 1% error budget will be fairly tough however you try to measure input and output power.

Connect a power resistor and a thermometer to the heatsink, then thermally insulate the heatsink by wrapping it in bubble-wrap or similar. Switch on, and observe the temperature rise. Switch off before it's got too hot. Allow to cool, and then repeat with different small DC powers applied to the power resistor. Find the applied power that matches the rate of temperature rise in use, either by iteration or interpolation. Obviously the characteristics of the thermometer and heatsink do not need to be known, only the power measurement to the resistor.

On reflection, that's not going to work accurately. Not all losses are in the components on the heatsink, just most of them. So calorimetry will under-estimate total losses.

I misread your question. I did originally think you were going between 12v and 240v, 100A and 5A. The likelyhood of getting good scale transfer between the different ranges to better than 1% would be remote. However, re-reading, it's 5 and 12v, and 100 and 240A, so you can use the same ranges for input and output.

Splash out on a 4.5 digit meter. It's likely to have better linearity between half and full scale than a cheaper meter.

Here's another incomplete answer but it may prompt some other ideas.

I would prefer to use oscilloscopes and use them to integrate V(t)*I(t). 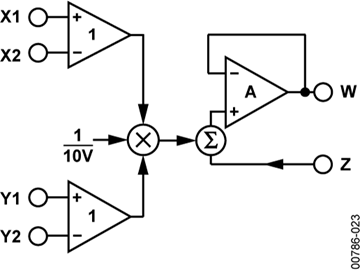 When faced with a problem of making a true RMS measurement of a phase-controlled AC application I used an AD633 to square the current reading and feed it to an integrator. Looking at the specification of the AD633 I see that it quotes "Total Error within 2% of full scale" so it's not good enough for your application. That chip is quite old I have read in other threads here that there are better four-quadrant multipliers available now.

Not the answer you're looking for? Browse other questions tagged switch-mode-power-supply efficiency switching-regulator or ask your own question.