I wish to know how to build a simple stepper motor controller which can run a bipolar stepper motor in forward and reverse direction in desired speed?

My project requires only 5 RPM so high speed is not required. If any one gives me circuit I can buy component and build it on my own.

I have removed the circuit recently added here by Vijay and placed it is a new answer, along with comment. I did this because it was not a suitable solution and needed major work to make it one. See new answer for details.

Some excellent discussion [here] (http://www.cnczone.com/forums/stepper_motors_drives/140317-viable_stepper_driver.html) with a number of circuits. CNCZONE discussion group.

The following are from the above page:

(1) This has all the logic for direction and step , using two 4000 series CMOS ICs.
Q1-4 and Q6-9 are H bridge bipolar drivers. Q5, Q10 disable whole bridges. Not strictly necessary - leave out and replace with a link.

(2) Part of a circuit. Shows half bridges with centre tapped windings but principles still useful: 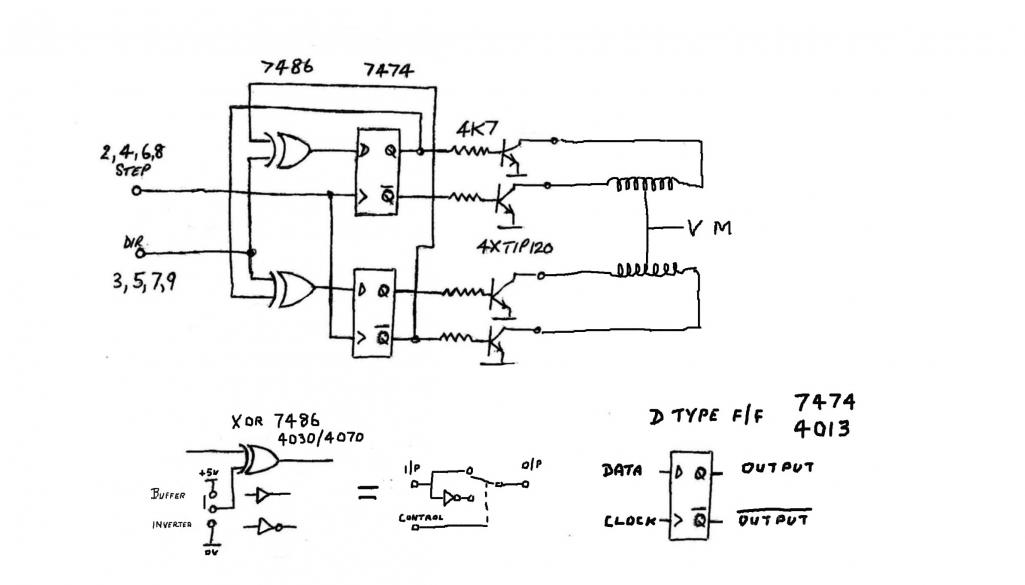 (3) A number of stepper motor driver links. Beware of the ads which look like part of the page. Usefulish. Here

Note that a square wave on step signal is all that is needed for continuous drive.

Spark Fun made up controller board - and related 1 chip driver

This board will allow you to control up to 4 stepper motors, with or without a microcontroller.

The circuit diagram is [here] - you only need one channel for one motor.
And you can buy the IC and do it yourself id desired.
Allegro A4983 datasheet here.

As can be seen - there is not much other circuitry involvd.
They show a microcontroller (which is a good idea, as Olin said) BUT all you need is a square wave on the step line at the stepping rate plus high or low signals on the other control leads and away it goes.

They use a VQFN package which is hard to solder if you are not used to such devices. Sparkfun make the Eagle PCB files available and may sell a bare PCB. 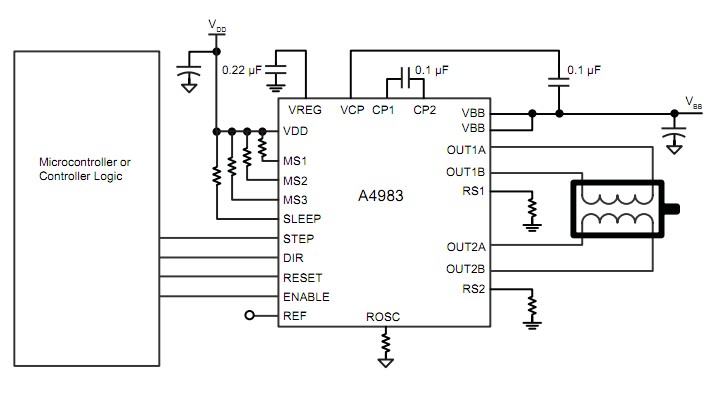 A lot of these links may be useful Gargoyle image search

From the circuit point if view, a stepper motor is just several coils that need to be turned on and off in the right sequence. Usually these coils are designed so that they only need to be driven in one direction. Some steppers have one side of two or more coils connected together, and some have all the lines separate.

When one side of the coils is already tied together in the motor, then connecting the common point to the positive supply and using low side switches is all you can do. Fortunately that's easy and simple. Just don't forget the reverse diode to catch the inductive kickback. If the coils are separate and the motor is built the right way, you have the option of driving the coils in both directions, in which case you want to use a H bridge per coil. The former is simpler and smaller and will always work, while the latter can achieve more torque.

Ultimately it's the current thru a coil that generates the magnetic field that does the work. The coils will be specified for some maximum steady state current. Since these are inductive, the current will not change instantly. Ideally you want to control the current, not the voltage of each coil. The voltage at which the maximum steady state current will result will be specified, so you can drive the coils with voltage. However, this will ramp up the current with a exponential decay on startup. If you don't need near the maximum speed, as you say you don't, then this will probably be good enough in your case.

Vijay proposed the circuit below as a possible starting point.

This is a circuit for a unipolar stepper motor controller, whereas Vijay requires a bipolar controller.

In a bipolar stepper motor there are (usually) two coils and these are driven with either of two possible polarities at a given moment. The effect is to advance the stepper over a 4 step cycle. If polarities are taken as forward or reverse and the two coils are name A and B then the stepping seuqence is -

A forward
B forward
A reverse
B reverse
A forward ... (repeating)

A unipolar stepper motor controller uses (usually) two coils both of which are centre tapped. The centre taps are connected to (usually) positive and alternate sides of a given coil are grounded to activate the coil. As the two halves of a coil are magnetically coupled, activating the left side of a coil has the same effect as if the right side of the coil had been activate with reverse polarity. The same result is thus achieved by using A-left, A-right as would be achieved by A-forward, A-reverse with a bipolar stepper motor.

A eldom realised side effect with a uni-polar stepper motor is that when a centre tap is connected to V+ and eg A-left is grounded, A-right will rise to 2 x V+ due to transformer action in winding A. This is no great problem as long as the off driver on A-right can withstand 2 x V+ and attempts are not made to clam winding ends to V+ - as is quite often done in circuits shown on the internet.

This is a unipolar stepper motor driver.
The BC547 transistors are successively switch to ground to enable half of each winding as required, as described above. To convert this circuit to bipolar operation it would be necessary to provide 4 x high side transistors and drive them correctly This could be done but requires subtantial extra circuitry and also level shifting for the high side drivers.

This is essentially what is done in this circuit (mentioned in my other answer). 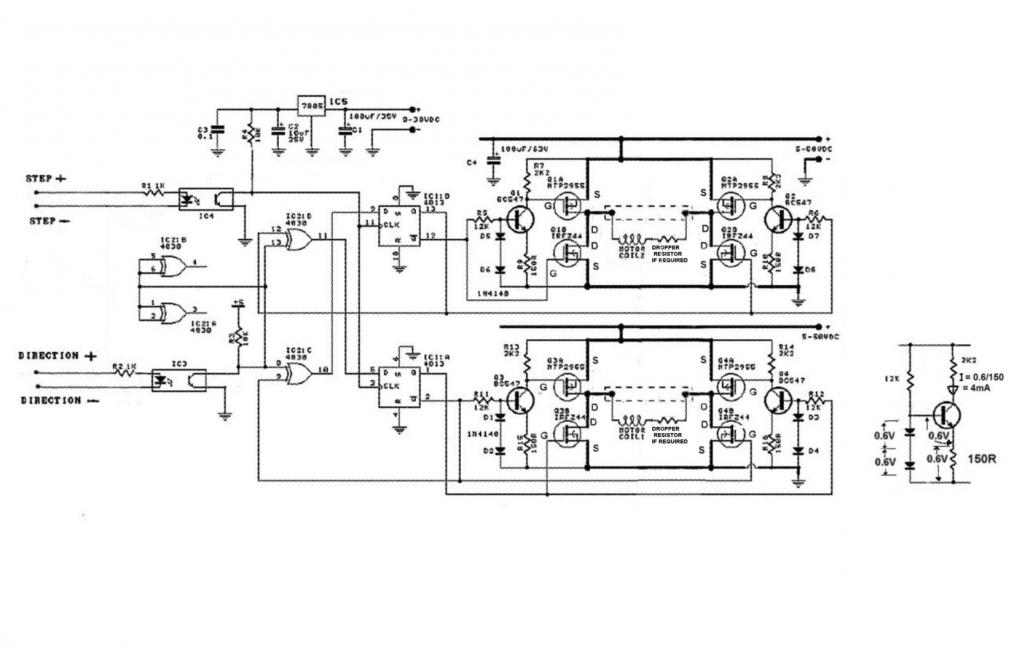 Below is a single winding driver at larger size.
The upper and lower FETs act as switches to V+ or ground and the BC547 transistors act as level shifters. The 4013 flipflops act as sequence controllers as before. This is an OK circuit but not the simplest that could be built - see my other answer.

Take Vijay's circuit as seen below in modified form.
Ignore the centre tap connections as the motors do not have these leads. Connect 4 equal resistors = Recan from the collectors of each of the driver transistors to V+. Here V+ = 12V but a higher voltage will now be desirable.

Ideally set V+ = 24Vand Recan = Rcoil. Current will now be same as before in coil BUT stepping will be niver.

Power waste: When eg Ql is on -
Current flows from Recan on Ql to ground plus
current flows via Recan on QR via winding to ground.
If Recan = R inding then Rcan on Ql ill pass 2 x current flowing via Recan and R winding.
SO 2/3 of current is wasted. 2/3 of power is lost in Recal on Ql and half of power in Recan in Qr + winding is lost in Recan.
SO 1/6th of total power is used to drive stepper! 5/6th of power is wasted. This may still be a good solution in low power cases. 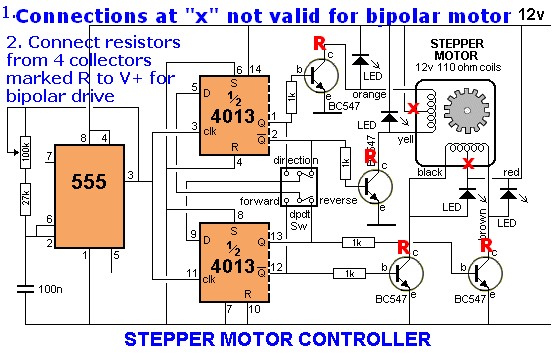 Not the answer you're looking for? Browse other questions tagged motor stepper-motor controller or ask your own question.

14
How is this design for a basic PCB pick and place?
1
L297 stepper motor controller clock signal question
2
Reversing direction of an AC universal motor
1
Stepper motor stalling when ramping down and then back up?
0
Dvd Drive Stepper Motor
0
Motor eddy current to resist 100 kg mass accelerating from stationary to 1 metre per sec
0
Linearization of motor's thrust
0
Manually triggered variable speed rotating system