Voltage doublers, like those close to be one stage of Cockroft-walton multipliers, are well known. They allow to double the voltage of an AC input and can be useful at the output of a transformer for instance. Of course, the price is that the output current is half the input current. My question is: is there a circuit (hopefully analogical and passive), not a transformer, that performs the dual task: to input an AC current, and output an AC (or even DC) current with half the input voltage, and twice the input current.

INSIGHT: it would suffice to find a way to charge 2 capacitors in series and to discharge them in parallel.

You can build such a circuit, but it requires some active device. You can't do it with just diodes and capacitors. Here is one divide-by-eight that takes mains AC as input and outputs DC. It has about 85% efficiency at 4W. It could be improved in several ways, but as it is, it is quite simple: 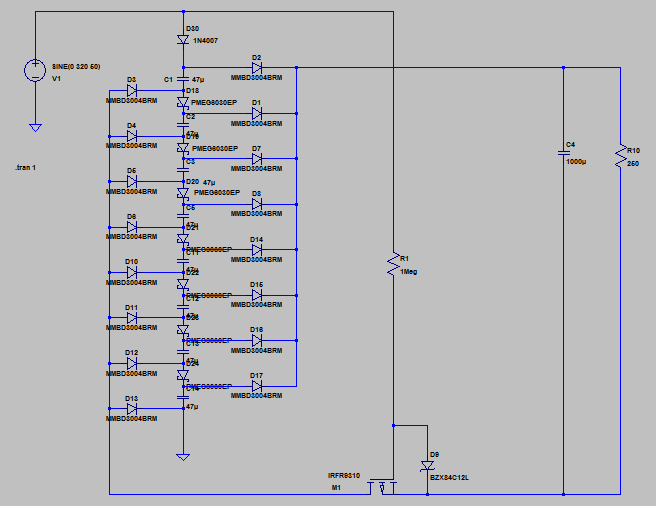 R10 is the load. In this example, it draws about 4W with 220VAC input (The output voltage is about 32V). You can't draw much more without the efficiency dropping dramatically.

Here is how it works: when the input AC sine is positive, the PMOS is blocking and the eight capacitors in series are charged through the top diode D30 and all the shottkies (PMEG6030) in series (the other diodes are not conducting). So each capacitor ends up being charged at VIN/8. When the sine is negative, D30 stops conducting, but the PMOS conducts. This makes all MMDB3004 conducting and the eight capacitors becomes all paralleled. The charge is then transferred to the output capacitor C4.

This, in fact, works exactly like a charge pump. You can divide by what-you-want instead of eight, by adjusting the number of capacitors and diodes. Of course, efficiency will be affected if there are too many.

This circuit is working on half-wave (one half for charging, one half for discharging). It would be possible to make it work on full wave, but it would become much more complicated.

Finally, from a safety point of view, I wouldn't recommend this circuit, as there is no isolation. Also, the size of each component makes it not more compact than a small transformer. Probably not cheaper as well, given the number of components required (when dividing by a high ratio), and given the required mosfet (it would be possible to reverse the whole circuit and use a cheaper N-channel fet, though). All in all, this circuit certainly isn't the best choice, actually.

Maybe using a dual of the capacitor? Something like this: 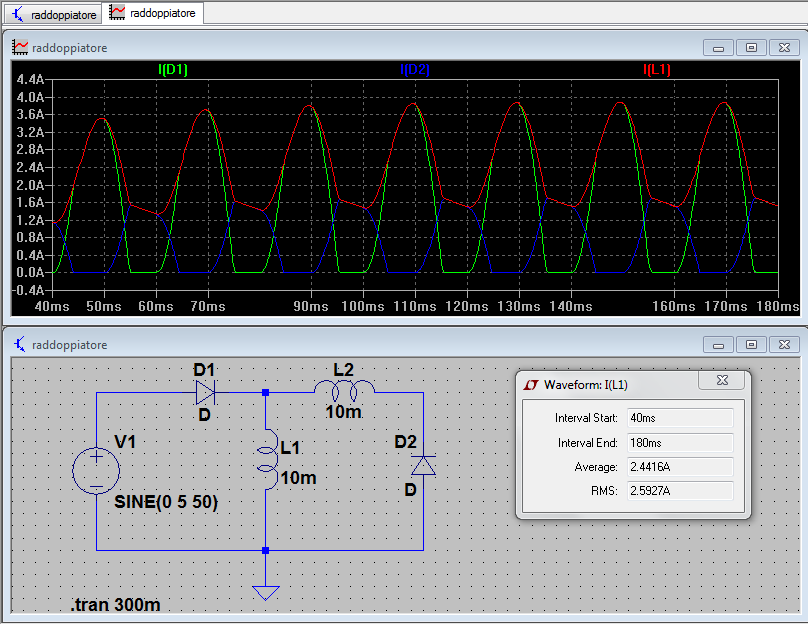 Ngspice give me similar results.

Not the answer you're looking for? Browse other questions tagged voltage-divider power-electronics current-transformer or ask your own question.