(The pictured circuit contains a serious mistake, see my answer for more detail. I decided to leave the question in its original form for educational purposes, though.)

(Both OP amps can be considered as ideal.)

As I like to derive my answers for DC analysis from the transfer function \$A_v(s)\$, I tried the following:

It should be the transfer function of a non-inverting integrator amplifier.

But here's the thing: the solution of a) simply says that \$A_{v,DC}=-\infty\$ which contradicts my answer.

So here's my questions for you:

i) Which answer to a) is correct?

iii) If the above doesn't work, why is it so? And is there a way to calculate a) from b)?

DC analysis can become very confusing when one has to deal with open loop amplifiers, especially in bigger circuits. So it would be very nice if one can derive the DC analysis results from the laplace domain transfer function.

iv) To go beyond the exercise question: I'm curious about the bode plot, because the single pole at \$s=0\$ (and no zeros) suggests that the magnitude goes from infinity to zero (with -20dB/decade) as the frequency goes upwards but what happens with the phase?

Stefan - without lengthy calculations, the answer is simple:

1.) For ideal opamps (with infinite gain) the gain of the circuit at DC will be infinite. Otherwise (for finite open-loop gain Aol) you must use another set of formulas derived from H. Black`s well-known formula for feedback systems. Note that your "circuit" is an idealized system (mathematical model) only.

2.) Please note, that for a non-inverting integrator the feedback path must be connected to the non-inv. input of the basic opamp. In your circuit, there is positive feedback (the circuit is not working).

3.) Hence, the resulting transfer function of your circuit (called "phase-lead integrator") is H(s)=+(1/sR1C1). This applies for an inverting gain of "-1" in the feedback path (as shown in your circuit).

4.) Regarding your last question (phase response): A slope of -20dB/dec corresponds always with a constant phase of -90 deg. Again, this is true for the ideal mathematical model only (as in your case with ideal opamps and no supply power limits).

5.) When real opamps with finite open-loop gain Aol are used, the gain of the integrator at DC will be identical to Aol - however, due to offset effects at the input of the opamp we must lower the dc gain by using negative DC feedback (R in parallel to the feedback C). This DC stabilization is not necessary if the integrator is part of a larger system with overall negative feedback.

I could finally talk to someone who's responsible for the exercise. It turned out that A1's input terminals had been erroneously interchanged.

The conclusions about the above incorrect circuit are as follows:

The correct circuit would have to look like this:

Here the results of a simple DC analysis and the transfer function as well as the state space model should be consistent (couldn't check it yet, though).

In this case there is (no inversion from Ve1+ and Vout) and (one inversion from Vout to V2). This makes the total count of inversions odd, which is negative feedback - as opposed to the faulty circuit above.

As for the original questions (this is my interpretation again, so no guarantee about correctness):

i) Strictly speaking the official answer is correct (\$A_v=-\infty\$), because it's futile to calculate a transfer function based on the wrong assumption of virtual GND at Ve1-e, but the circuit doesn't make sense anyway.

ii) As @Chu has pointed out, a magnitude can't be negative. The absolute value of my expression would hence be \$\infty\$ again.

iii) The DC analysis should indeed be consistent with a (correctly derived) transfer function. One should then use a step function \$\mathscr{L}\{\sigma(t)\} = \frac{1}{s}\$ as input and then calculate the inverse Laplace transform of the resulting expression.

Wolfram Alpha creates nice Bode plots for arbitrary transfer functions, of course also for this one.

Just adding a little to the accepted answer, specifically to why the DC gain tends to \$-\infty\$ as \$s\rightarrow0\$ . In reality, if you analyze an ideal opamp under positive feedback or negative feedback, you still get the same transfer function, but that'd only work if the circuit is 'static'. 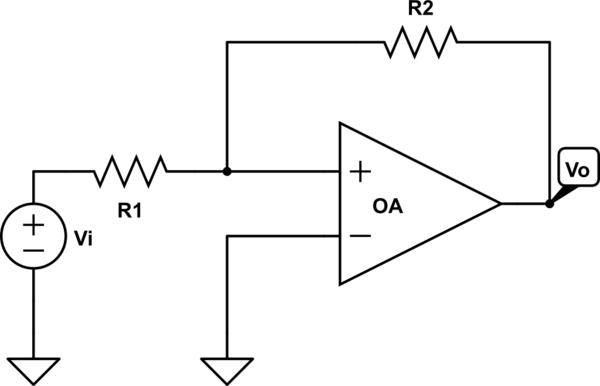 If you try to analyze it, starting out with the well known input/output relationship of an opamp:

Be aware that I am not assuming any of the conditions we do under negative feedback, e.g \$V^+=V^-\$.

Plugging that into the equation for the output voltage:

Working out the algebra takes you to:

Since \$A\rightarrow \infty\$ for an ideal opamp, you transfer function now becomes:

And that is the same transfer function you get if that opamp was being used in the inverting configuration. However the issues with the positive feedback are well documented, i.e consider what would happen if the output voltage is perturbed.

If we replaced \$R_2\$ by a capacitor and worked in the laplace domain, then the transfer function would become:

Not the answer you're looking for? Browse other questions tagged operational-amplifier circuit-analysis transfer-function integrator non-inverting or ask your own question.