I have read here and there some articles about pcb guard trace/ring. But none of them discussed how to correctly implent it. What I could find were some pictures and comparison that cant help me at the moment!

What I would like to know is how can I make the following circuit more current-leakage proof (In design case - I know that PCB material and SIR plays a big rule).

I am wondering if I should care about leakage current in the circuit or not! If so, how can I improve it?

This is my test circuit: 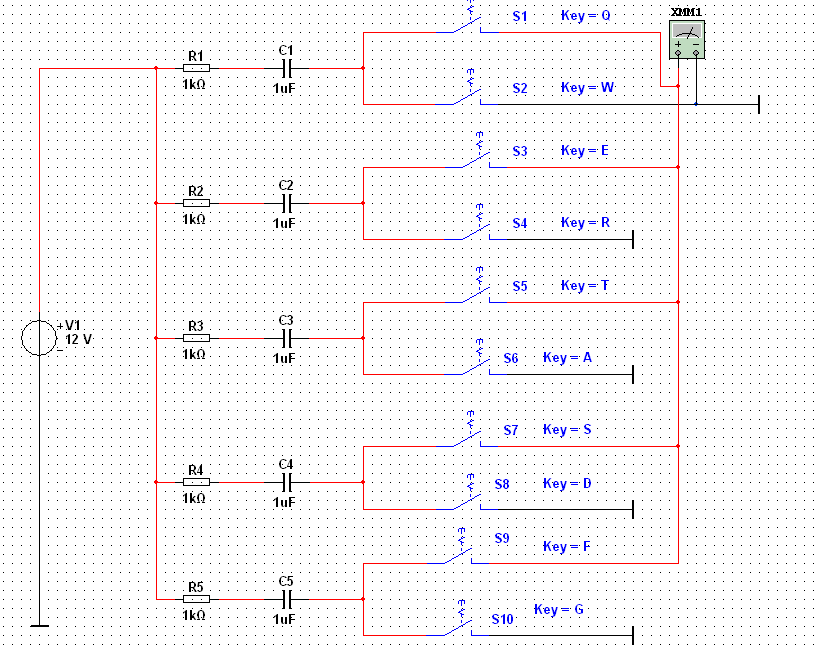 I am thinking of connecting the capacitors just by wire into the circuit, that is one pin of capacitor soldered to by a wire in the little circuit I designed, and the other pin also with a wire soldered to BNC shield that goes to picoammeter and is in common with voltage source (SMU)

Here's an example of a classic guard ring layout for a metal can op-amp from National Semi's AN-241: 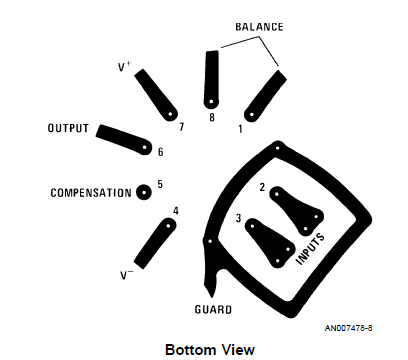 And here's an example of how it would be connected, from Analog's Analog Dialogue magazine:

The key feature is that the guard ring is connected to a node that will be driven to the same voltage as the high impedance node being protected, but with a much lower source impedance.

Note that not all vendor websites are created equal. Microchip's AN1258 recommends using the high-impedance net to create a guard ring around the low impedance nets --- don't do this.

Now to your specific case. While the undriven side of your capacitor is not strictly a low-impedance node, since the ammeter itself should provide a fairly low impedance path to ground when you're measuring, it's still going to cause measurement errors if any current should try to reach ground through that node instead of by another path. It wouldn't hurt to add a ring around the node like this:

Unlike in another answer, I wouldn't include the driven side of the capacitor within the ring, since that's a low impedance node, being driven to a fairly high voltage. However, you've indicated the net in question isn't even physically located on the PCB, so this advice is largely moot. Being as the high impedance net is basically floating in air, it should be well-protected from leakages in any case.

What to connect the ring to? The guard ring has to have low impedance path to ground. The best approach is to have the guard ring at approximately the same voltage as the signal, which the ring is protecting. That way, the leakage between the signal and the ring will be small, because the voltage difference between them is small. Sometimes, connecting the ring to GND works. Sometimes, you need a guard amplifier (look it up).

P.S. Methods for reducing DC leakage are different from those for combating conducted or radiated EMI.

Please use the following link for this purpose:

This will be very useful for you.

Of course, this makes one wonder what to do with that 0.050 inches with nothing in it. What some PCB designers do, including me, is to put a ground trace around the perimeter of the ground plane and then tie that trace to the plane using vias approximately every 0.25". I don't honestly think this improves things over just having that gap, but it seems good in theory, doesn't hurt things, and at least provides a good reminder to not route signals there.

Power layers should be done similarly, in that they should be pulled back from the edge of the ground plane. I just go ahead and put a ground ring on the power plane layer, and tie it to ground like before. Like with the signal layers, it provides a good way to "automagically" pull the power plane back.

This method does not apply to PCB's that don't have a ground plane. Putting a ground ring around such a PCB might make things worse, not better, if that ring ends up carrying any current.

I don't believe that this will do anything for leakage, although EMI works both ways. Any circuit that radiates EMI can also receive EMI. So from this perspective it might make your design more tolerant of external EMI interference.

Not the answer you're looking for? Browse other questions tagged pcb pcb-design noise current-signal or ask your own question.

18
What are Guard Rings?
5
Resistor Noise - What it will have effect on, in a circuit?

2
Thermocouple effect on low voltage/current signals in PCB and connectors
3
Micro controller reset due to noise, PCB design for noise immunity
2
How to solder PCB?
0
Current sign when leave from battery and entering in resistor
4
PCB design review: analog routing
1
LT3092 and large guard rings
0
Pads very close together, no space for guard ring? What should I do?
1
Guard Ring on a printed circuit board for a transimpedance amplifier