I'm working on a regenerative-braking project with a DC motor. My Beaglebone Black drives a small DC Motor using a TB6612FNG motor driver from Sparkfun (datasheet): 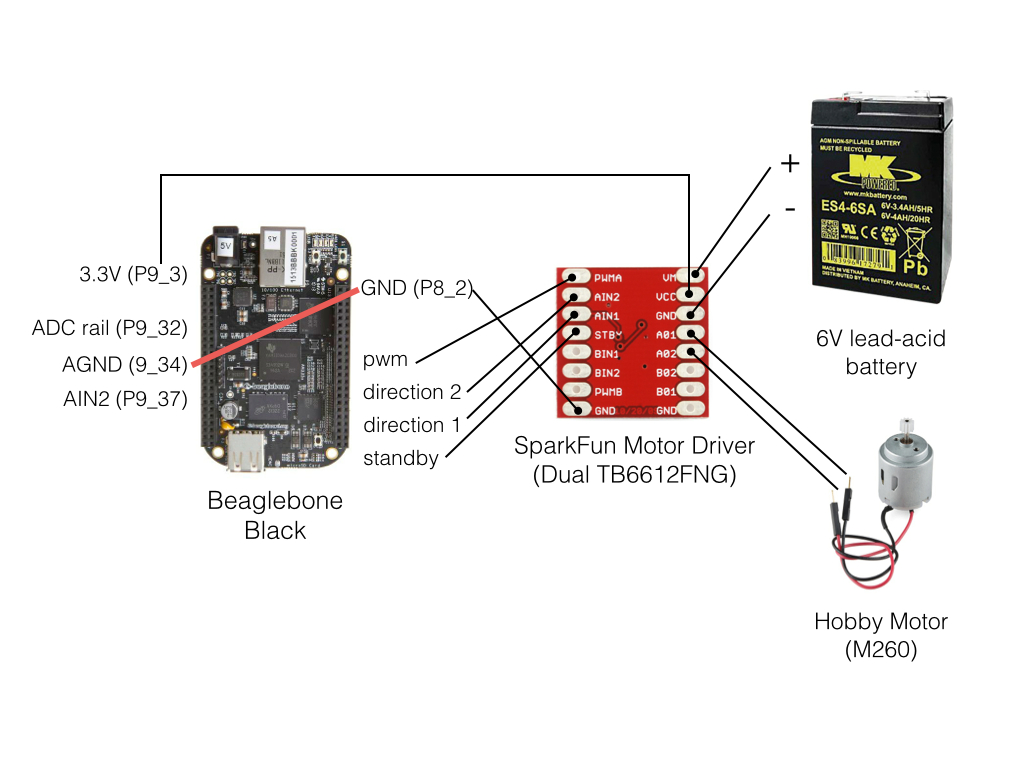 Everything runs fine except that sometimes when I'm driving the motor back and forth and I try to read an ADC channel, my program hangs (can't even Ctrl-Z) and two minutes later I get a kernel module stack trace from the kernel's dmesg:

I can reproduce the problem by running a program that drives the motor at 100% duty cycle and reverses the direction every second, and reads the ADC:

(My actual code is pure C and uses this C code underneath the Adafruit BBIO Python library to read the ADCs and also uses Saad Ahmad's PWM kernel module.)

The motor's coil resistance is 2.5 Ohms and I'm driving it with a 6V battery, so the stall current is 2.4A, which seems to be (somewhat) within the specs of the motor driver.

Significantly, it does not hang if I drive the motor at a low duty cycle (like 20%) instead of a high duty cycle (like 80% - 100%). This suggests that the motor currents are somehow working their way into the Beaglebone and screwing up the ADCs.

The program hangs regardless of whether I connect analog ground (AGND) to the Beaglebone's system ground (GND) (the pink line in the picture). When they are disconnected, my DMM's "max" function measures a 70mV spike between them when the motor changes direction.

As the picture shows, the battery's negative terminal is connected to "GND" on the right side of the motor driver. The program hangs in this configuration. Additionally, the program also hangs if I connect the right-hand side motor driver "GND" to its left-hand "GND". My sense is that these should remain disconnected because of the large currents through the battery.

There is a 0.1 uF capacitor across the motor terminals. My crappy LCR meter says the motor's inductance is 1 mH. I have not placed any other capacitors in the circuit.

My guess is that the sudden changes in motor direction cause current spikes to exceed the 3A limit stated in the driver datasheet, overwhelming the motor driver's ability to isolate the Beaglebone side from the motor side, and letting current leak into the Beaglebone and screw up some voltage that the ADCs depend on.

I'd really appreciate the community's thoughts on this.

I'm happy to report that we "fixed" the problem yesterday by putting two 1uF caps between the motor terminals and the motor case: 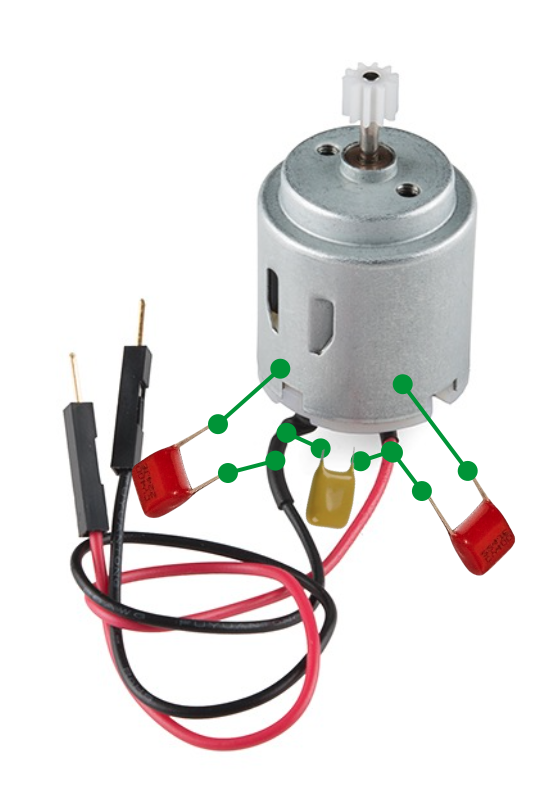 The yellow "104" cap (0.1uF) was already there; the motor shipped with it pre-soldered to the motor terminals. 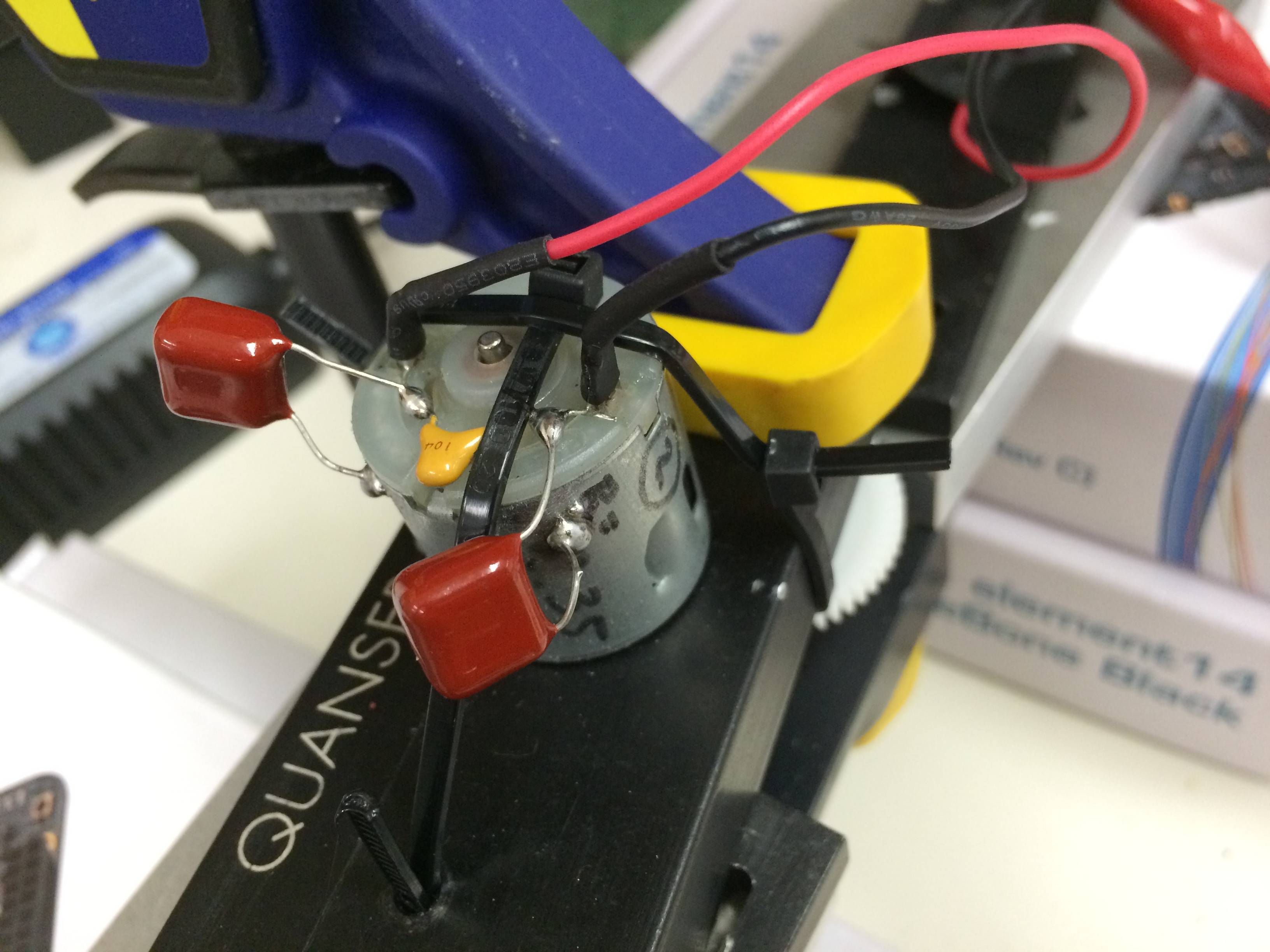 Another trick we used -- although it didn't fix the problem -- was to run the two H-bridges on the TB6612FNG in parallel, like this: 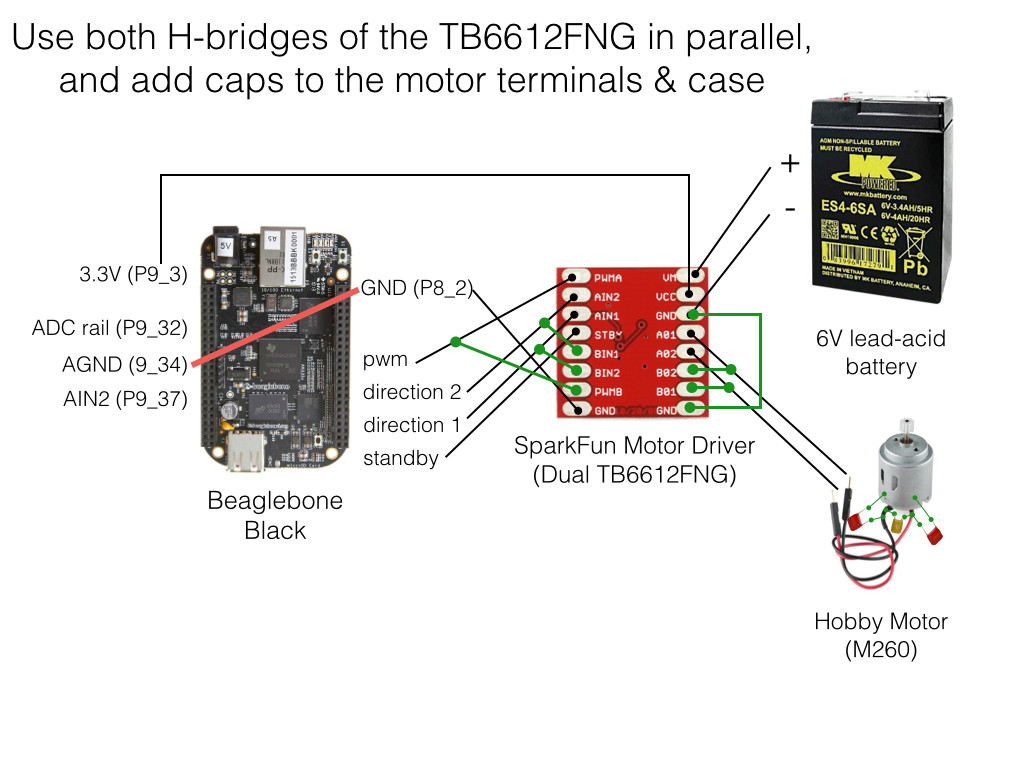 This way, the bridges share the current, so it should've helped if we had been over-currenting the driver.

This technique was recommended by this application note:

and this example, which uses the L298 motor driver:

Not the answer you're looking for? Browse other questions tagged adc pwm dc-motor beaglebone-black or ask your own question.