Resistor Noise - What it will have effect on, in a circuit?

Reading the article resistor noise and knowing that resistor noise is in the form of Voltage (is that thr right expression?!) leaves me wondering that this generated voltage will have only eefect through the circuit tracks and enters the components in its way, or if it is in form of EMI and can have effect on nearby sensitive components even if they are not connected to the noisy resistor?

If the second one is correct, would remedy be capping the resistors with a metal shield (like the cpa in the analog section of old PC video cards or TV cards?)

Contact noise: It's not exactly clear what the article is discussing here, but he distinguishes this noise by its 1/f characteristic. Noise with 1/f dependence could arise from the current passing through the barriers between the carbon grains in a carbon resistor (which would be why the article recommends other types) or by current passing through the boundary between the metal leads of the resistor and the carbon resistive material. This is the only type of noise that the original article claims will be reduced by using a higher-wattage resistor. This could be explained by the higher-wattage resistor having more parallel paths through different grain or interface boundaries, resulting in noise contributions averaging out.

Shot noise: I wouldn't normally characterize this noise source as being generated by a resistor. Shot noise is fundamental in any circuit, resistive or not, when current is detected. It results from the fact that current doesn't arrive in an absolutely continuous stream, but one electron at a time. Shot noise is likely to be a problem only in extremely sensitive circuits where other noise sources have been very carefully eliminated, or when high current gains are used.

Either thermal noise or shot noise can be characterized as either a voltage noise or a current noise, based on the Thevenin and Norton equivalent circuits: 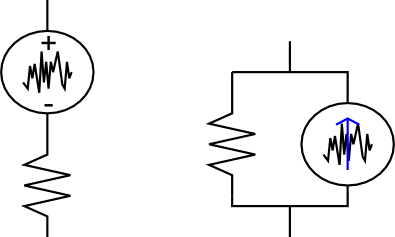 In any case the resistor noise is injected into the circuit nodes connected to the resistor. Because it is generally a very low level signal, it's unlikely to be emitted as EMI and cause problems in unconnected parts of your circuit, unless, of course, your circuit is amplifying it.

To answer a question from the comments, "white" noise is noise that has constant power density over frequency. For example, if a white noise source produces 2 nV/sqrt(Hz), and we measure it with 1 Hz bandwidth around 100 kHz or with 1 Hz bandwidth around 100 GHz, we'll measure 2 nV rms noise in either case. Thermal noise is a white noise source, while "contact noise", as mentioned above, is not white because it has has 1/f frequency dependence.

There are different types of noise. One of the most prominent is thermal noise. As the name suggest, this is thermal, so it's linear to temperature (as the equation shows there).

This means that if a resistor gets hotter, it will have more noise. Metal shielding is not very effective against this kind of noise, metal shielding is typically used to suppress EMI getting into the circuit (or getting out). For example, video circuits can work in regions of MHz. Noise of 100MHz is everywhere around us (FM radioband), so if those kind of signals would get into sensitive, (high impedance) circuits, it will introduce interference.

Noise can propagate through circuits because of their frequency (some components can't suppress very high frequency noise that well) or just because the noise happens to be on a signal you want to amplify. If you amplify the signal by a hundred, the noise will be hundred times large too. An amplifier will add noise too, but doesn't have to be thermal noise, can also be flicker noise or of different types specific to semiconductors.

The signal-to-noise ratio says something about how big the signal is compared to the noise. This is expressed in decibels, and the higher the better. If you pass the signal through more amplifiers and circuits, this value will only drop further.

...will have only eefect through the circuit tracks and enters the components in its way, or if it is in form of EMI and can have effect on nearby sensitive components even if they are not connected to the noisy resistor?

Resistor noise is inherent inside the resistor itself. You cannot reduce it or filter it out; you can only learn to deal with its consequences -- one of which is that for ultra-low-noise circuits, you may need to pick resistor values that are relatively low values.

Not the answer you're looking for? Browse other questions tagged resistors noise or ask your own question.

3
Resistor noise equation gives infinite noise for an open circuit?
1
In the given circuit, will the resistor have current across it?
3
How to reduce thermal resistor noise in filter circuit?
1
How to protect my sensitive electronics from noise induced by AC power line?
2
Eliminate beeps and bleeps in the power lines
0
Is excess noise in a resistor only present with DC?
2
Johnson Noise in Differentiator: Does the input C have an effect?
7
Does a battery powered resistor have Johnson Noise?
4
DAC/ADC Precision & Noise: PD Resistor/Capacitor effect