Using 566 or 555 IC timer I can create voltage controlled oscillator, but this oscillator can produce square and triangular wave only, but how can I obtain controlled sinusoidal oscillator of frequency range (1Hz to 100Hz).

You can integrate the triangular wave and tune the parabolic wave to be close to a sine wave. Forum thread, Sine shaper, Circuit ideas, Simple function generator

You can use deep active filters if your range of frequencies is not too wide and just filter the sine wave. Nice waveform generator

There are resistor and digital counter DAC pseudo sine wave designs. A patent even

Or these days you could use a PWM digital system to get the signal and use a pulse frequency so high it is easy to filter out the desired fundamental. This is often implemented as code in a DSP chip or for a simple circuit that does not need any other controller stuff a FPGA type setup like the DIPSY might work.

1) Use an op-amp with a filter in the feedback path to create a sinewave oscillator. The filter should have 360 degrees of phase shift at your desired oscillation frequency. By placing a variable inductor, resistor, or capacitor in your filter you can change the frequency.

2) Use a BJT or MOSFET and some inductors resistors and capacitors to create a sinewave oscillator. Use a variable inductor, resistor, or capacitor to change the frequency.

3) Use a 555-timer or similar to generate a square wave and then run the square wave through an integrator or some other low-pass filter. But note that if you want the output to look like a sinewave at 1Hz, then the cutoff of the filter needs to be lower than 1Hz. That same filter will reduce the amplitude of your output significantly at 100Hz. You can put a variable gain amplifier after the filter to compensate for the gain variations.

4) Use a microcontroller to generate PWM or delta-sigma style pulses and run the pulses through a low-pass filter or integrator. The filter cutoff should be much higher than your 100Hz max operating frequency (say 1KHz), and the pulses should be generated at a frequency that is much higher than the filter cutoff (say 10KHz). This technique offers the advantage that the gain and frequency of the waveform are controllable independently. Also, you can generate all kinds of wave-shapes not just sine-waves.

I was recently reading a certain project material and the author(s) mentioned something about using a bubba circuit to generate pure sine wave. The circuit does not look too difficult to build if you are really interested. 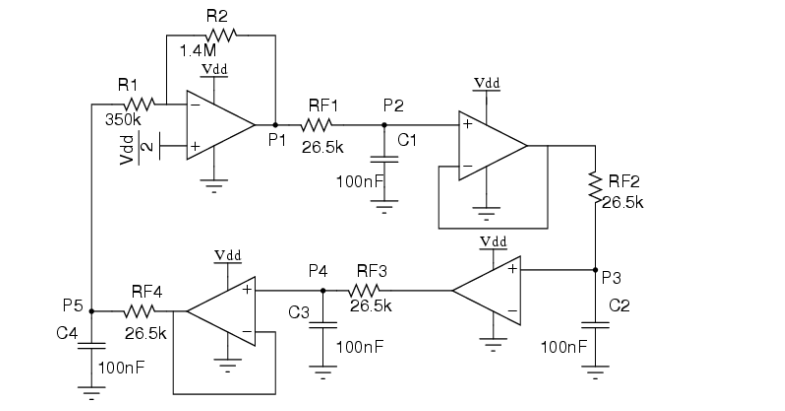 You can also use a micro-controller if you wish to go through the trouble.

Not the answer you're looking for? Browse other questions tagged oscillator oscillation or ask your own question.

0
LC comparator based oscillator
1
Designing a relaxation oscillator using TL074
0
1Hz Sine wave oscillator - Multisim
2
Are there any drawbacks to this oscillator frequency multiplier circuit?
1
What is the best oscillator to be used in a capacitive soil moisture sensor?
1
How to radiate a positive oscillating voltage?
0
Clock Generation from Oscillator
1
1v square wave generator