SRAM isn't blank on powerup, is this normal?

I had finally finished my Z80 memory board, but I was disappointed to see that it wasn't working properly (simple NOP test with the address lines connected to some LEDs) as the counter quickly spiraled out of control instead of incrementing as it should. However, I am not one to give up and after about thirty minutes of continuity testing to unveil no short circuits and all proper connections, I finally thought to check if the SRAM chip was powering on with all 0s stored. I am well aware that SRAM (unless non-volatile, which my particular chip is not) will lose all of its contents upon losing power, but I had always assumed that it would be filled with 0's (ie "empty") when it regained power. The SRAM I'm using seems to be randomly filled with 1's and 0's each time the power is reset. It never remembers any data, but it isn't loading empty. This isn't really a problem as I can simply write a small program in ROM to load all 0's into RAM on powerup, although I would still like to know if this is how the SRAM should be functioning or not. Thanks!

Edit: I forgot to mention that after using the ROM to load 0's into SRAM the system worked fine, so this was indeed the issue.

Unless you have an initial state programmed, it will be more or less random. Although this may vary with different SRAM implementations. You also say "blank". Some might think that random is "blanker" than all 0's.

SRAM memory stores memory on back to back inverters.

This forms a bi-stable system (two very stable states with metastability dividing them). So, upon power up the back to back inverters are briefly metastable.

This happens because as the voltage ramps up (from being turned on), both NMOS and PMOS of the back to back inverters would be 'equally' on, holding both bitnodes at half the supply voltage (this is the metastable state). Eventually some thermal noise (or any process that introduces variation) pushes or pulls this value down or up a little bit. At this point the bitnodes snap into one of their bistable states.

In fact, there is even a paper "Power-Up SRAM State as an Identifying Fingerprint and Source of True Random Numbers"

One very helpful plot contained in the paper is below. The dotted line represents the supply voltage ramping up: 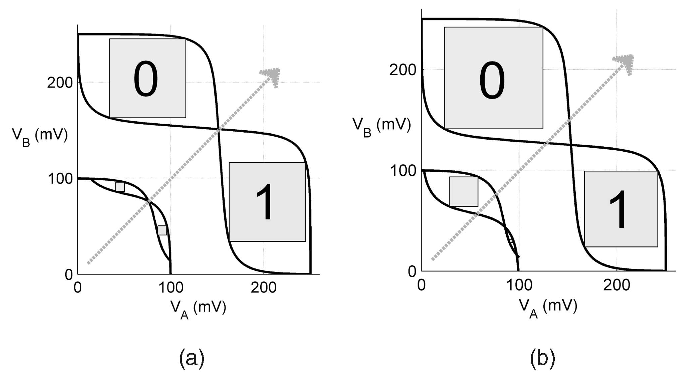 Depending on how each bitnode in the SRAM you are using currently was fabricated, you end up with more or less of one of the two situations above. In both cases, unless you intentionally skewed the SRAM, the initial outputs would look more or less random. In the left-hand situation, each subsequent powerup would generate more random patterns. In the right-hand situation, the initial startup would be seemingly random. But further powerups would cause the SRAM to tend to further certain states.

Having worked with SRAM for many years, I can tell you that it will power up with seemingly random contents, although I have seen devices that power up with nearly the same random looking contents each time. If the power off cycle is short enough (depending on power supply characteristics and the number & value of bypass capacitors), large fragments of previously written data can linger in the SRAM through power cycles - although the content will be corrupted.

A single bit is stored in a SRAM in a circuit of 6 or more transistors. If you want a defined power on reset behaviour for the SRAM, each RAM cell would need more than 6 transistors only. The needed chip area will be substantially larger and the SRAM chips will be more expensive. This is a parallel power on reset of all bits at the same time. A serial reset would require an oszilator, an address counter and enough time during power up to resets all RAM bits or bytes sequentially. If the processor accesses the SRAM before the serial power on reset is finished, errors may occur and data may be lost or changed.

There are programming environments for microprocessors with detailed memory mapping of several RAM areas. You may define an area with or without a power on reset as required by the application. Several different areas within the same SRAM are possible. It is not always necessary to reset the whole SRAM on programm start.

Not the answer you're looking for? Browse other questions tagged digital-logic memory reset sram z80 or ask your own question.

4
Advice on suitable SRAM
3
Sense Amplifiers in SRAM
1
Precharging circuits in SRAM
5
SRAM swapped address / data bits
0
Is it possible, and if so, how difficult would it be, to replace the volatile memory in Gameboy games with non-volatile memory?
5
Replacing Pseudo-SRAM with SRAM
0
Maximum cells in a row in a SRAM memory array
15
Why am I Seeing A Weird "Notch" on the Data Line For Some Logical 1s?