How to fast charge a Lifepo4?

I hope that I have not carelessly overlooked a previous post that answers this question; but I definitely have tried, and still find myself a little lost.

I have 15 A123 ANR26650M1A batteries connected in series. They have a safe maximum continuous charging current of 10 amps, which is stated to have a fast charge time of 15min. I am about to purchase a programmable active balancing BMS board based on the MAX14921. I also have a Mean Well RSP-1000-48 that supports up to 21 amps. Currently, I have been balance charging my series, with a variable DC bench power supply, with a constant current of 10 amps, and constant voltage at 54 volts, through a PCM board for top balancing. The bench PSU is not charging anywhere near 10 amps, and I am not getting anywhere near 15 minute charging times.

Aside from that, most importantly, when I order the programmable BMS, I want to be able to achieve a charging time of 15 minutes utilizing the Mean Well PSU. I cannot seem to find anywhere that explains how this is achieved.

I've included links to all of the other datasheets I could find for these cells as well.

I apologize for my ignorance, and thank you in advance.

You should try charge testing with one cell so as to understand its characteristics. LiFePO4 behaves somewhat differently than conventional LiIon. Once you understand how one cell behaves when supplied by a power supply set to <= 10A and <= 3.8V then you can better understand what your series string is doing.

BMS 'interference': If you are using a BMS then it is essential that it does both what you want it to do and what you think it does. If a BMS is intended for LiFePO4 use and has not been specifically set to your conditions it may eg limit Vcell_max to 3.65 V and thus resist efforts to charge at 10A CC up to 3.8V Vcell_max. The single cell tests below are done without a BMS and the results for single cells monitored during a multicell string charge should not be affected by the BMS under 'normal' conditions.

Just supplying the string from a supply limited to Vmax x cell_count is not safe as if cells are charge-imbalanced some cells could have voltages applied which are above specification.

Also, if cells are charge-imbalanced, if cells which reach 3.8V first are voltage limited at 3.8V then their current draw will usually start to drop and will prevent lower voltage cells being charged correctly. Repeating this fast charge process without cell balancing is liable to increase imbalance with cycling.

What I would expect to see is:

Current initially = 10A and Vcell initially somewhat above 1.6V start value due to internal IR drop and voltage rising from initial value.

Ichg will now probably start to fall, controlled by cell internal processes.
Highest input case Ichg will remain at 10A throughout and total input will be
10A x 1/4 hour = 2.5 Ah. As cell capacity is nominally 2.3Ah and as current efficiency (but not energy efficiency) on charge is usually over 99% then a full 2.5 Ah charge is very unlikely. More likely is that Ichg will drop from 10A to some lower value so that Charged capacity is now >= 96% of maximum (according to the A123 'proper operation' sheet.

Cell temperature will necessarily rise somewhat due to internal resistive heating. It may rise substantially and the cycle would need to be terminated but this would be expected to be unlikely in most cases.

Once you have seen how VI varies with time in the above test starting from fully discharged you can see what a single cell does when starting from partially charge. Of particular interest is liable to be starting from say 5% & 10% charge as this gives an indication of what one cell will do when it gets to Vcell = 3.8V while other cells are at lower state of charge.

What I'd expect to see is that no difference would be observed up to near Vcell = 3.8V (as the supply is current limiting) but before 3.8V is reached the cell may "try to accept" less than 10A, it cannot do so under CC conditions, so Vcell will rise more rapidly towards 3.8V over the last part of the CC ramp. Now 3.8V has been reached earlier in the cycle.
An important point has now been reached - in this one cell test situation the cell WILL sit at 3.8V as the supply is Vmax limited. But, in a string situation, if 3.8V has been provided per cell by a CV system, and if other cells are still at less than 3.8V, and if eg 10A CC is applied, with no other intervention the cell voltage WILL rise to > 3.8V. If several cells reacah tghis point at about the same time, not too much harm may be done, but in an eg 15S string, the cell that gets to 3.8V first will be pushed to above 3.8V and quite possibley to > 4.2V and disaster.
This is where a per cell BMS is vital. Vcell must be limited by the BMS to 3.8V if nothing else does so. There is nothing too special about 3.8V (afaik) as compared to say 3.85V or even 3.9V so if a BMS was set to 3.85V per cell and the string voltage was set to Vmax = Ncells x 3.8V + lead Vdrop + connections Vdrop then all should be well enough.
A simplistic BMS could just shunt current around a cell when Vmax is reached.
More complex schemes can be used.

Once you know how a single cell behaves above you should be able to reasonably predict how a string behaves under Icc <= 10A, Vmax = N x 3.8V conditions. It is evident that if cells are clamped at 3.8V AND will not accept 10A (which meaans that their effective resistance must rise) then the whole string will be current limited to < 10A.

It is also highly likely that if an initially uncharged cell will accept 10A at any voltage below 3.8V, then your system with Imax = 10A and Vmax = N x 3.8V is probably driving some cells to above 3.8V.

It seems likely that performing the above tests will give you enough insight to be able to understand what is happening with your multi-cell charging.
As above, key points are: Having cells transition from CC to CV at different times and the effect on individual cell voltages and currents, & ensuring that all cells never exceed rated values.

The ideal is a per cell monitoring system with digital output input in real time to a computer that can analyse and report appropriately.
A cheap (compared to other costs) and almost parallel input brain-processing system is to use a per cell voltage monitor with display. Analog and digital both have their place in such systems, but a low cost self powered system is possible using off the shelf self powered digital voltage meters avaiable from various Asian sources.

You can buy 2 wire self powered meters operating from eg 3V-30V for typically $US1.20 - $US1.50 each with 3 digit LED displaay and calibrate-it-yourself accuracy.
This is an example only with NO intention of recommendation. Note they say 3V minimum in the heading and 2.5V minimum in the text. YMMV :-).

Image from above site:

You can also get 3 wire input versions with 0- 99.9V (3 digit) V measurement and eg 3-28V power supply inputs. These are provided with Vin, V+_supply, common connections and if Vsupply_min is below the voltage to be measured Vsupply can be obtained from 1 battery further up the string. This is less convenient, gives slightly more chance of fiery or silent or magic smoke meter catastrophe when you get it wrong but allows true 0-xx volt input range.

Image from above site: 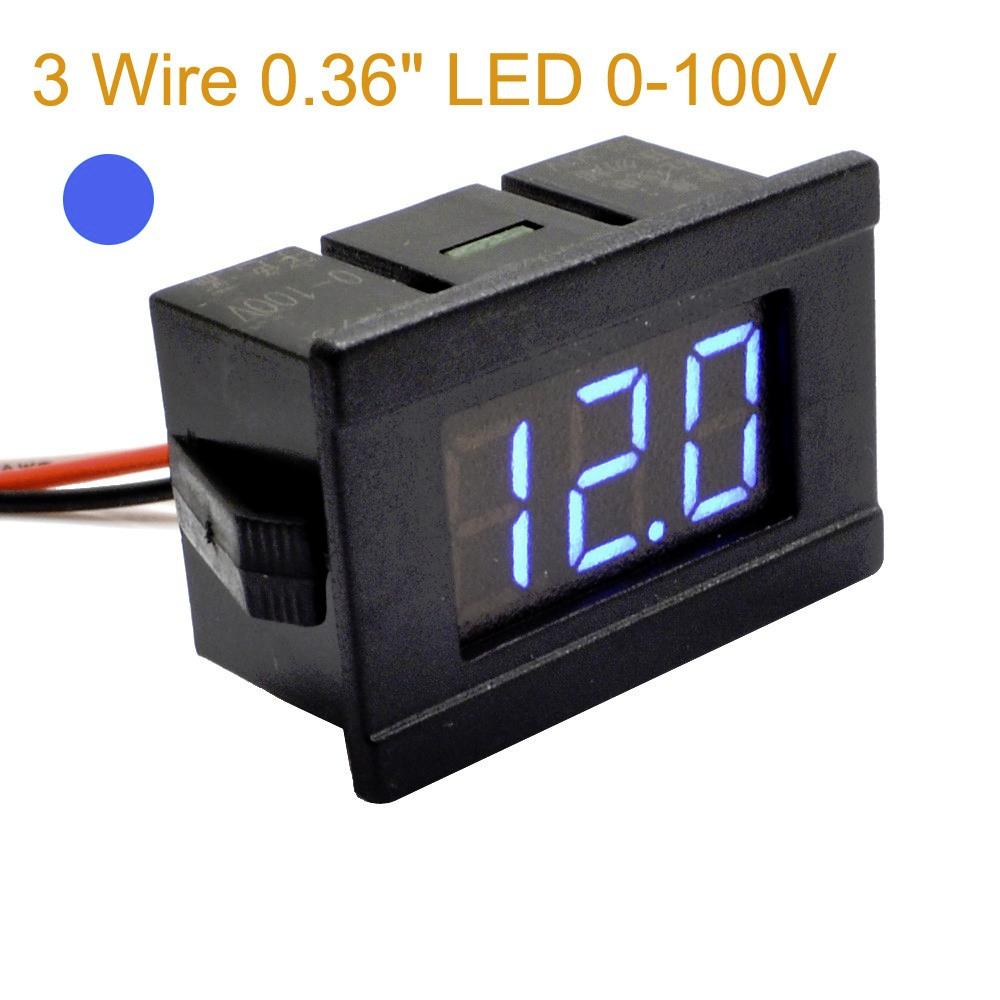 Both arrangements imposes a small current load on the cells being measured, but this will be far lower than the currents in question and liable to be neglibgle or able to be allowed for. As the meters will draw power whenever connected the best arrangement is probably a multi cell plug connected into the BMS - either BMS turns off power or meter plug is pulled.

A zillion meters - many other searches possible. Meters with current and voltage also available. Ali Express - MANY volt meters

For normal LiFePO4 CCCV charging, I_cc is whatever the manufacturer says and V_CV is usually about 3.6V. The CCCV charging system is then similar to that for LiIon (but at lower per cell voltages) with charge termination ending when the cell-determined and decreasing CV charging current falls below some present percentage of Ichg_max. Charge termination currents of 10%, 25% and 50% are common with LiIon and similar probably 'work OK for LiFePO4, - higher % is always gentler on the battery.

With LiIon V_chg max is ~= Vterminal_V_chgd and is very close to the safe upper limit for a Li based cell.
However LiFePO4 has a final terminal voltage of 3.6V but CAN be charged over short periods at higher voltages where 3.6V < Vchg < 4.2V.

From the linked instructions:

And note the cautions about temperature during this process.

You can do this by setting a lab PSU output to 57V, and its current limit to 10A.

Also note that 57V must be measured at the battery terminals, not the PSU terminals. If your PSU has remote sensing, use it. Don't just crank the voltage above 57V at 10A because when the current drops below 10A you will overvolt the cells.

And finally, they are a little coy about how the battery lifetime suffers under 10A charging, but the graph on the datasheet suggests that lifetime is reduced by higher temperature and higher charge-discharge current.

And post-finally : while this answer assumed the BMS woould be competent to handle balancing between individual cells, Russell raises doubts about that, as well as strongly reinforcing cautions about exceeding cell temperature. His detailed comments are valuable and I hope they will be rolled into a more thorough answer.

Not the answer you're looking for? Browse other questions tagged batteries battery-charging charging lifepo4 or ask your own question.