How does pulse width modulation use ground

How can there be common ground if on output i have 1A and input 0.5 Amp. I tried to search google to better understand ground in PWM but everywhere i look it talks about duty cycle and stuff like that.

Can someone make me understand GROUND use in PWM ? (+including step-down regulators that use PWM i think).

I see your dilemma. The buck output stage will look something like this: -

For simplicity I'm using the example of a synchronous buck regulator - this is equivalent to both MOSFETs being a kind of high frequency change over switch feeding a low pass filter formed by the L and the C.

With no load connected, do you see that the average current from the incoming supply HAS to be zero amps? This is important to grasp so take some time to ponder this. To help you understand, the inductor is recharged with current when the switch is connected to 12V and that current is discharged to a negative value when the switch conects to ground: -

When the switch reconnects to the incoming 12 V, the current flow from the 12 V is negative i.e. energy is being returned to the 12 V source.

That current reduces in magnitude rising through the zero ampere point and reaches a positive maximum. After this point, the supply is disconnected and zero current is taken from that supply. Current (in red below) restarts at a negative value and the process repeats: -

Basically, the incoming supply current (red) has an average value of zero amps. As I said earlier, it MUST be this way because there are no power dissipating components that could force an average DC current from the incoming 12 V.

It's worth noting at this point that the output voltage (for a 50:50 duty cycle) will be 6V with a slight amount of ripple voltage. The ripple is due to the L and the C forming an imperfect low pass filter. A low value could be typically 20 mVp-p superimposed on the DC output of 6V.

In effect, the 50% switching process, the inductor and the capacitor behave like an ideal step-down transformer; 12 V is converted to 6 V and, with no load connected, zero average current is taken from the incoming supply.

When you do connect a 6 ohm load, 1 A DC flows into that load (ignore the slight bit of ripple, minimized to trivial amounts through sensible component selection) so, what happens to the inductor current....

Clearly, 1 amp DC has to flow through that inductor to feed the 6 ohm load and that will mean an inductor current that looks like this: - 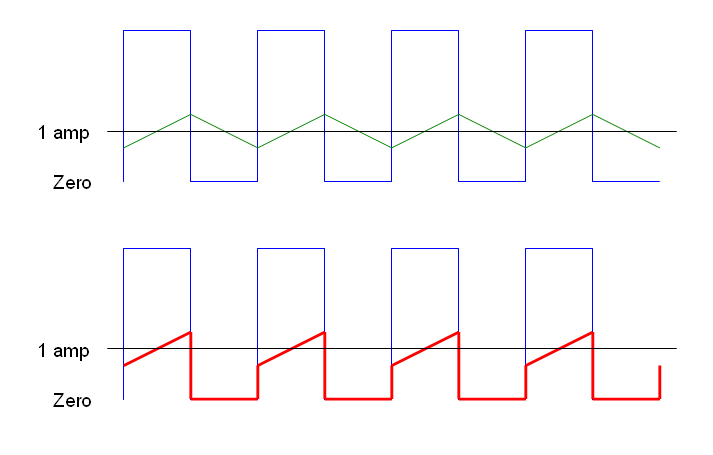 The lower half of the picture shows the current taken from the 12 V supply - it has exactly the same current as the inductor when the switch connects it to the inductor but, for the other 50% of the time, that current is zero.

Ground use in PWM is the same as in any other circuit. Ground is just a reference point. PWM = Pulse Width Modulation

When you smooth it by capacitor, you will get 6V output and 1A DC.