Reducing voltage for analog input, or how to reduce number of wires needed?

TL;DR: I need to reduce the number of wires my setup is using. What would be the best way? A Voltage Divider?

Background:
I'm working on a project to design gloves that produce a lightshow effect for a Scarlet Witch costume. Each glove contains 3 flex sensors, values read and used analog via analogRead, and 2 RGB LED strips that will flash different colors. Each strip has 2 LED's on it, in series. I am not using the green channel on it, so I have 2 strips each with essentially 2 red LED's in series and 2 blue LED's in series. It's actually from an adafruit RGB led strip: https://learn.adafruit.com/rgb-led-strips/ where I desoldered the last LED in the series of 3 and jumped the connections so it only used two. I didn't need the 3rd LED, and it reduced the power needed from 12v down to where it can use a 9v battery. 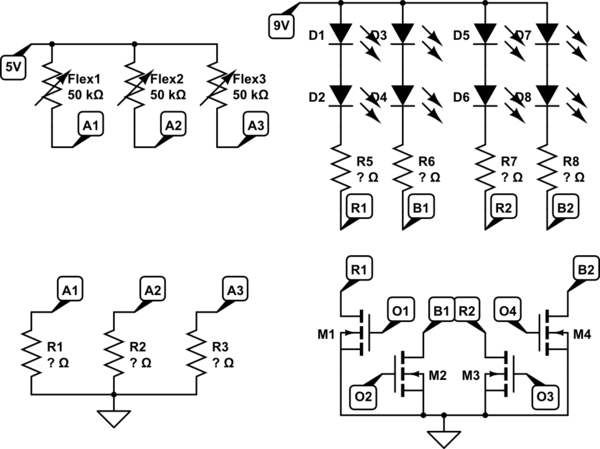 My problem:
Every set of wires I have access to without heat shrinking stuff is 2, 4, or 8 wires. All of the connectors I have that will allow the gloves to be easily detached are 8 wire pins as well.

My problem is I'm trying to remove one of the 9 wires. One way to do that would run the flex sensors with 9v, and reduce the voltage back at the arduino. Would a resistor based voltage divider work? It would only be powered while the gloves are on, which will be at worst a 10% duty cycle (show them off for 30 seconds, walk around for a few minutes, etc). But would that work where I need to read a variable value? (The more the fingers flex, the light brightness and and pulse speed changes).

Is there a better way to do it? Everything I've ever read about voltage dividers with resistors is "just don't do it".

Or given what I mentioned above about the circuit, can anyone think of an ingenious way to consolidate one of the wires? The gloves are tight, fingerless leather gloves. There is VERY LITTLE room in them, otherwise I'd put the arduino in the gloves themselves, but the MOSFET's (or even transistors if I went that way) take up entirely too much room. Hence the 'power pack'.

Worst case I can take the flex sensor off the wrist (that turns the gloves on when your wrist is pulled back/up, like how spider-man bends his wrist when shooting webs) and turn the gloves on/off with a finger movement, but I'd rather not have to both program that, as well as having the gloves turn on accidentally if a finger twitches :)

There are a few ways to do this. 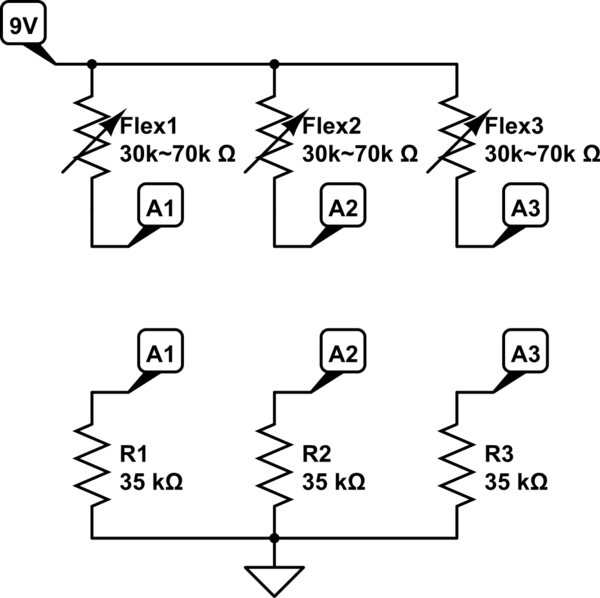 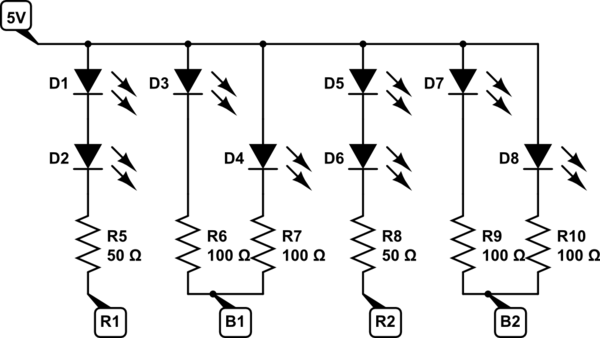 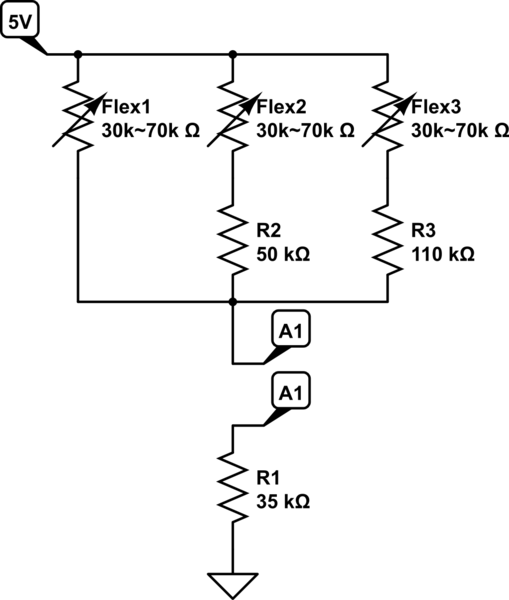 As a suggestion, use a USB power bank (one that doesn't turn off by itself or you may need to add a pulse setting). Much better than a 9V battery, rechargeable and convenient.

Alternatively, go smd and bare bones. A bare microcontroller, smd sot-23 transistors or mosfets, 1206 or 0805 are all small but hand solderable, keeping everything on the hand except for power, which could be a single 2 wire cable.

As a side note, I've done this to a UV led strip, modifying it for 5V power from a usb power pack for a costume as well. Worked great.

Is this what you are looking for?

R2 and R3 form the voltage divider you mentioned. D1 keeps the signal voltage within 5V + 0.6V just in case something bad happens.

The actual resistor values have to be adjusted according to the range of your flex sensor.

p.s.: it is possible that you may omit R2 or make it very low, it just depends a lot on your flex sensor resistance range

Not the answer you're looking for? Browse other questions tagged analog voltage-divider or ask your own question.