How A Rotary Position Sensor Works

I just want to apologize for not being very clear in my question and I understand what you guys are saying. After reading the guidelines for this site I understand now that this was not the correct format or structure to ask this question, its not that this site can't give me the information I need, its just that the way I asked was downright terrible and wasn't facilitating any learning. This site is supposed to be a site of knowledge that could be used by all users in the community, not just for personal use and specific questions especially not for business matters. I have edited my question in what I believe to be a much more "relevant to others" format, that just seeks clarity in fundamental concepts of electricity and magnetism and how they could apply to sensing position/angular rotation of a physical object rather than clarity in the specific operation of a sensor that I haven't even given you any information on.

Unfortunately I was told explicitly that I cannot say what the function of the sensor is nor what it is called due to confidentiality agreements. So after re-reading my post and the helpful comments of the community I understand the issues with my post and have revised it accordingly.

I really appreciate all the feedback from you guys, this site is an incredible resource, filled with knowledge for all and is filled very intelligent people that are willing to help others. I would love feedback from you guys on the format of my newly edited question, I think I have a much better understanding of the purpose of this site and how to ask questions that not only help me figure out my own problems, but also benefit the community.

Just to clarify some points that I didn't explain in the original post:

I work for a large car company in North America, and we have a sensor (which unfortunately I can't go into detail with due to confidentiality agreements) but essentially it is a rotary position sensor that uses two rotating magnets on different teethed gears (like the ones shown in Figure 1) to determine angular rotation of the big wheel (Wheel 1 in Figure 1) from some preset "zero" point. My team is trying to determine the root cause of an issue with this sensor so I talked to the supplier who explained to me how it works and I still don't completely understand how the sensor works which makes it hard to root cause, so I am hoping someone can give me some theories on how they think a hall effect sensor that uses two magneto resistive pairs that is setup like the one in Figure 1 would be able to tell the vehicle how many degrees the big wheel (Wheel number 1 in Figure 1) has moved. 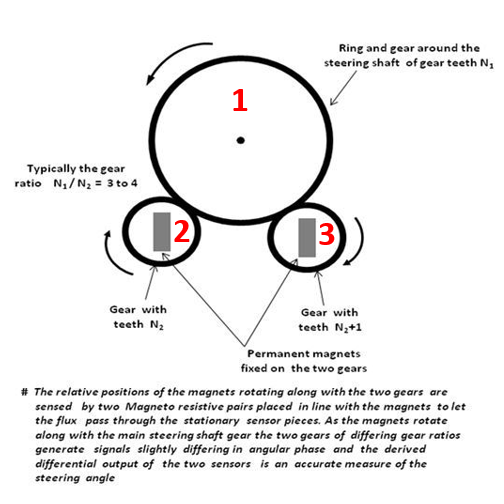 The supplier of the sensor explained how the sensor works and gave some speculation as to why the issue might be occurring. Regardless of what the sensor specifically does, the image and explanation above just give some context to my specific issue to better illustrate the concepts I am having issues with which is how could two magnets rotating on two different teethed gears be able to tell a computer (The Engine Control Module [ECM] on the vehicle) how far the big wheel (Wheel 1 in Figure 1) has moved.

Essentially the supplier told me that this sensor is using the hall effect to tell the vehicle how far the large wheel (Wheel 1 in Figure 1) rotates, my understanding of a hall effect sensor which is shown in Figure 2 (Which I guess I will put in the comments because I can only put two links in a post) was that the varying magnitude of the magnetic field strength which would come from the magnet physically moving around the big wheel (Wheel 1 in Figure 1) which would correspond to certain amount of degrees of rotation.

So I understand now that my original understanding was incorrect, you probably aren't going to have the magnet physically rotate around the big wheel (Wheel 1 in Figure 1), this wheel is pretty big relatively speaking [Can't give too much away ;)] so you would need a pretty strong magnet for the sensor to be able to detect the magnetic field if the magnet was all the way on the other side of the big wheel.

So I did some more research and came across another method for how a rotary position sensor could use magnets to determine the angular rotation of the big wheel.

Here is how I now think a rotary magnetic position sensor works: 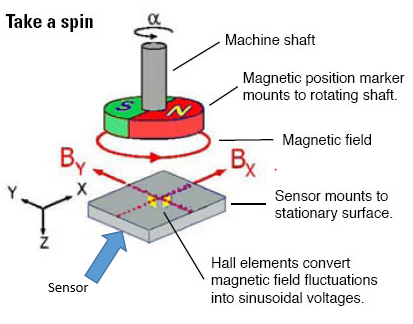 I think that a single rotating magnet attached like the one in Figure 3 will produce magnetic flux which the sensor would somehow convert into sinusoidal voltages (Maybe one of you could explain how that works but that's for another day) which would correspond to a certain degree of rotation. But again, from the picture the supplier sent me, I don't think that is going on here either.

So I am just looking for some of your ideas on how a setup like the one in Figure 1 with two rotating magnets on two different teethed gears could tell a computer how far the big wheel has moved. I was thinking there could possibly be something similar to this setup used in another industry application that you guys might know about or if there is a general methodology for how setups like the one in Figure 1 work.

So hopefully I illustrated my question better, (I couldn't have made it much worse from the original lol) and I really appreciate all the help from this community.

The following is a very likely correct explanation of what you dealing with. Even if the sensors used are not identical to the ones used for example the method is almost certainly what is used.

Note that the sensors are stated in the diagram's text to be "magneto resistive sensor pairs". MR sensors determine angle and NOT magnitude of magnetic field relative to a sensing axis. Answers and comments referring to Hall Effect sensors are incorrect as a Hall Sensor works on field strength and not field angle.

Read the following as slowly as needed and as many times as needed for it to make sense. Once the basic method is understood everything else 'drops into place'.

The image below combines your original image with figure 1 from the NEWSCALE
Smart off-axis absolute position sensor solution document. PDF here. Your system may have devices corresponding to those shown here. In the newscale system they claim that the absolute angle of the magnet north-south axis can be determined with 14 bit accuracy.
They say -

By careful selection of the teeth count on A, B, C the system can be used to determine the absolute position and number of whole turns of A from rest by simply reading the 14 bit position signal from the Sa & Sb sensors. The readings are absolute - no 'count' must be kept of transitions past a point or from zero. The system can be "immensely accurate" - it is likely that for rotations in the order of 10 to 20 turns of A the positional error would be governed by mechanical tolerances rather than electronic ones.

What could go wrong?

Indeed. The $64 question.
Or, the $N00,000 question in this case.
From the supplied information it is not clear what the problem is, but it should be 'easy enough' to determine if the system and equipment are working as intended and, if not, why.
sensor outputs should be well defined and completely repeatable.
Issues MIGHT arise with sensor noise, magnet attachment, demagnetisation, changes in magnet-sensor distance, digital noise, general electronic failures, ... . it SEEMS like an "easy enough" problem to troubleshoot - whatever it is.

Touting for business is generally frowned on on this site. Si I'll just note that if after reading the above it seems 'correct' and you want someone to investigate it, please see my profile page for contact details :-).

A few minor liberties have been taken with numerical aspects which do not affect the gist of the answer and which improve readability.

KMA36 rotational and luinear MR sensor - pops up all over.

Many images - each links to a related webpage.

You seem to be thinking of the whole system as if it is rapidly spinning. Generally steering systems don't do that, most people older than about 5 don't sit there spinning the wheel as fast as they can while driving down a road.

The sensor as described is intended for reading something that is moving slowly enough that to the electronics it is effectively stationary. Once you think of it in that way the explanation of how it works is perfectly reasonable.

You may have to break with tradition and actually fixing a problem under warranty for a change.

If the magnets are just spinning and not physically moving closer or farther from the sensor then how is the sesnor getting different values for magnetic flux density?

Of course they are moving closer or farther away (as far as the sensor is concerned). A rotating magnet produces a field (to a static sensor) that reverses polarity every rotation. This is easily detected and even measured as a linear output proportional to instantaneous rotation angle.

Think about it - there are maybe 40 teeth on one and therefore 41 teeth on the other.

Not the answer you're looking for? Browse other questions tagged sensor magnetic-flux or ask your own question.