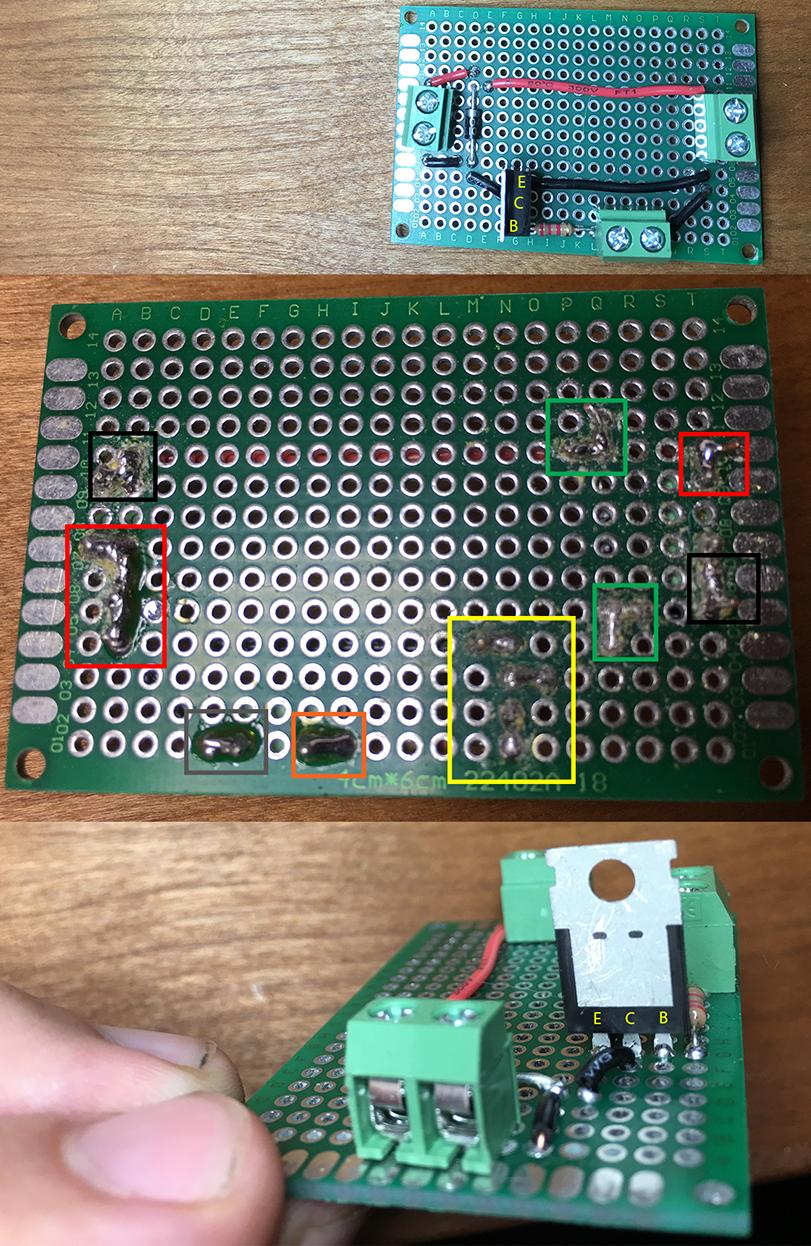 I am trying to replicate this circuit: Parastaltic pump driver.

My understanding is that both power supplies need to have a common ground because obviously otherwise the + from the 3.3 PWM wont have anywhere to go and wont trigger the base of the TIP120.

Now, where it gets weird, for me...is that when I hook up the 12v power supply and I measure the voltage between the + and - on the 12v terminal block I get...12v...like the circuit is complete. The motor does nothing though. And no current is going through the base pin. If I take my pprogrammable power supply that I'm using in place of the 3.3 from the Arduino, plug it into the wall, do NOT turn it on, and touch the + lead to the + of the terminal block leading to the resistor connected to the base pin...the motor starts to slowly turn. If I touch the - from the power supply to the - terminal of the same block, it stop turning and something starts smelling funky (shut it off before I could investigate, the TIP120 is cold to the touch however).

Now, I did this in a project board and you know them, you have to do some nasty solders, so I thought, ok, I don't see any shorts or measure any shorts but lets do it in a breadboard just to be safe. Recreated the whole thing, same way, EXACT same result.

How the hell is touching the positive terminal of the powered off (if I unplug the DC PSU from the wall nothing happens when I touch the + lead to the resistor on the base) PSU causing the motor to spin? It also acts like its got plenty of current but low voltage as the motor spins up right away just very VERY slowly.

I've measured the DC motor and it takes about 375mA to get going and once its humming along with no load it draws around 80mA anything less than 375mA and it slowly ramps up, but obviously if I drop the voltage and leave the output current at 375mA it slows the RPM without impacting its ability to start.

I freely admit I'm new to this and learning but my understanding what, no base current, no circuit. But it acts like its free to carry all the voltage it wants, just no current. As to why hooking up the positive to a non powered on PSU allows it to start turning...and worse still why then also touching the negative from the powered off CPU appears to allow it to draw a LOT of current...I'm at a loss.

Your circuit is built and you are now in debug phase. High current faults are often a problem and to debug without burning out the components we need to limit the current to a safe value. If you have access to a lab power-supply then that's easy - just set the current limit to a low value. 100 mA might do the trick in this case. Then you can measure voltages at various points around the circuit to try and understand where all the current is going.

Figure 1. A bench power-supply with separate voltage and current limit adjustment and readout. (The voltage setting in this case seems to consist of a coarse and fine potentiometer.

[OP's comment:] With the power supplies, when I set the current to 100mA is it also beneficial to run them with Over Current Protection?

If the over-current protection disconnects the supply it's useless as you won't know why. Let's take an example using a lab PSU with voltage limit set at 12 V and current limit set at 100 mA.

Using the lamp test will allow you to measure the voltage across the diode/motor, the transistor and anything else you want. They'll all be lower than on a good circuit so you'll need to make allowances for that and interpret the readings.

It seems like it would be difficult to troubleshoot as I know its pulling more than 100 mA and its just going to kill the outputs pretty much immediately.

Whatever is giving a short-circuit will have zero-volts across it.

Or will it do a pretty good job of not letting you have any more current than this regardless.

Either the current limiter or the lamps will do this.

6
Transistor with two voltage levels, Vb ≠ Vcc
4
Arduino/Atmega with TIP120/121/122 transistors: base current question
2
How is it possible that shorting base and emitter allows current to pass?
1
Transistor not giving enough current
0
Circuit Check Please (LED driver)
1
Using transistors (or relays) on a 12V 3A pump
1
Does a TIP120 transistor have an internal resistance when switched on?
0
using a TIP120 Darlington transistor to control a 12v fan from an ESP32 board?