I made a small bristlebot. my version can turn left and right using two vibrators and is controlled by an ATTiny uC. I would like to add remote control functionality so i'm asking what's the simplest and smallest component(s) I can add to my bristlebot to make it remote controllable? (the size of the actual remote control device doesn't matter, just the components on the bristlebot). i want to use radio control, not IR. I have to say, comming from the digital side, I have no experience with analog circuits and RC sender/receivers so far.

thanks for the hints

Something along the lines of a couple of Alpha-TRX433S would probably do. 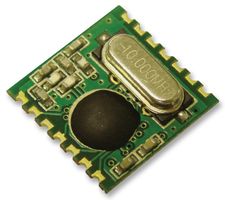 They are simple transceivers with an SPI interface. If you want cheaper eBay is your friend - this RF-2400P looks to do the same thing as the above, but won't come with a nicely written datasheet.

EDIT - It turns out this one does have one - User834 has kindly provided a link to the R4-2400P Datasheet.
Anyway, the reason for the initial assumption was that often the minor electronic products sold on eBay don't come with anything much in the way of documentation, which is something to weigh up when choosing where to buy from (plus waiting times, customer support, etc)
EDIT 2 - Along with the datasheet, on their site they have some other RF-2400P documents/code examples (see pages 2 and 3) which may be of interest.

You haven't mentioned exactly how the bot is controlled at the moment though. I am assumimg you can interface with the ATtiny's SPI.
If not let us know what you have available on the bot to interface with.

I recently finished my library for the RFM70 radio module, check http://www.voti.nl/rfm70 I have tested it (ao.) with an arduino. That module is cheap, and has a digital interface. Negative points might be short range, and 3V3 operation.

But why do you rule out IR? You could use a existing TV remote, saves you half the effort.

Smallest & simplest would be infrared, not RF. Look at Vishay's range of IR receivers

Not the answer you're looking for? Browse other questions tagged robotics remote-control remote or ask your own question.