I have a 24V battery and I'm trying to obtain a virtual ground from it. 90% of the circuits I found limit themselves to an opamp, which has very low current sinking. I'm trying to add a pair of transistors in push pull configuration, but my simulations are failing and I have no idea why. I would appreciate very much if someone could help me with this. 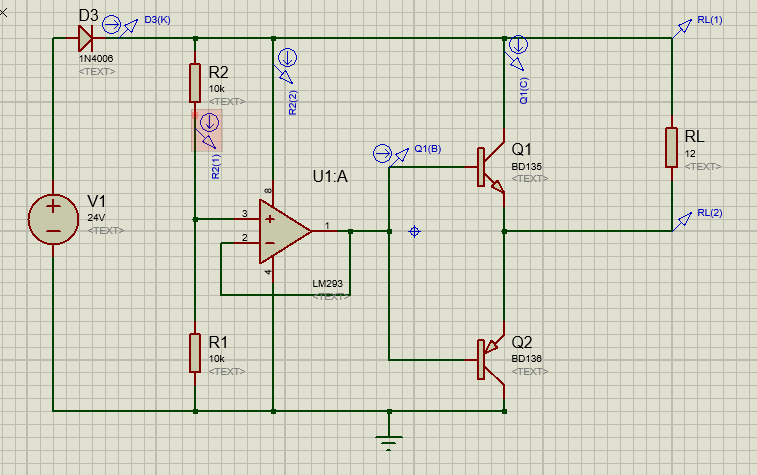 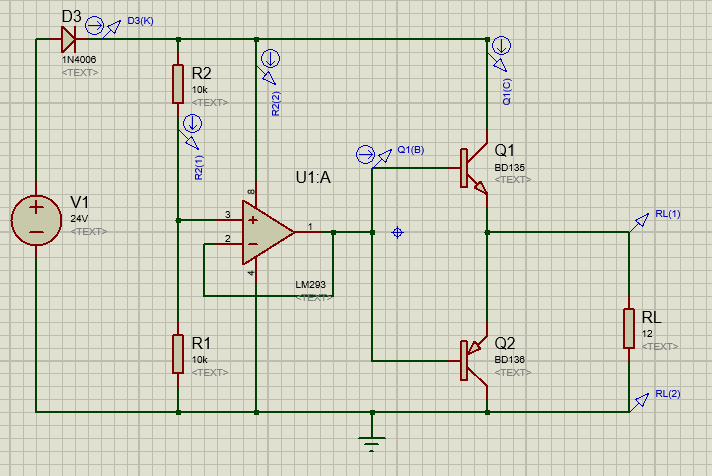 I thought that, in this second case, the opamp would provide a small base current for the Q1 transistor, which then would drive a higher current from the V+ line and feed the load resistor. It doesn't seem to work this way, however. Please, could anybody enlighten me or give me a few tips?

The problem is that your feedback signal is taken from the wrong place. 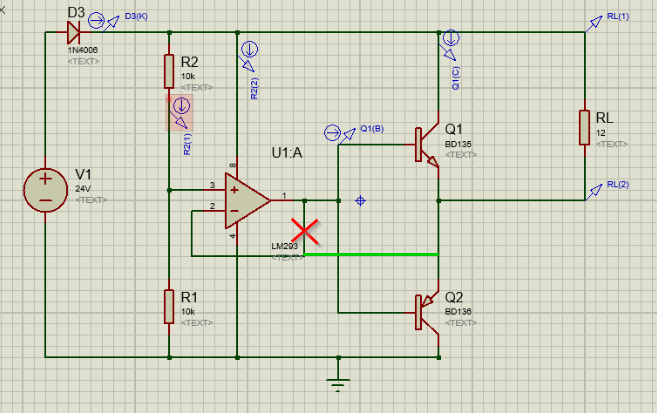 In your original layout the feedback signal is monitoring the output of the opamp but has no idea what's happening at the load which is where it matters. If the circuit is working the voltage at RL2 would be the same as that on pin 3. I think that if you measure it you will find that it is out by 0.7, the emitter-base voltage drop of Q2.

Instead, take the feedback from the junction of Q1 and Q2's emitters. The opamp will now correct until that point is at the same potential as pin 3.

Note that this arrangement can be problematic in some situations (push-pull audio amplifiers, for example, because the to switch from sourcing base current for Q1 to sinking base current from Q2 the opamp has to suddenly switch from +0.7 V to -0.7 V. To solve this a biasing arrangement is used to pass some "quiescent current" to keep both transistors slightly on near this point. It may not matter in you application.

It is failing in simulation because you're using a comparator rather than an op-amp.

The comparator is not unity-gain stable and it has an open-collector output, meaning it can't source current and if it could, it would oscillate.

Use a op-amp such as an LM358 and it will work, but it would be better to feed back from the output (transistor emitters) rather than the op-amp output. There is little danger of instability unless you have a very large load capacitance, because the transistors have no voltage gain.

A glaring problem in your example is that you hadn't provided any biasing for your BJTs. They each need a \$V_{be}\$ to operate in their active region and tying the bases together means that isn't going to happen. Their emitters are then just mostly "floating." So you need to start out by providing reasonable biasing.

A very cheap way to do this is to jack the bases apart by using two diodes which themselves are forward biased and operating. (You 'hope,' for now, that the two diodes provide enough of a difference to provide that biasing.) A resistor can provide those diodes with some current. But you'll need two in this case, to put the diodes roughly at the midpoint and also so that both bases aren't tied to their collectors. Those two resistors, in my first example these are \$R_3\$ and \$R_4\$, should be of the same value to do that. 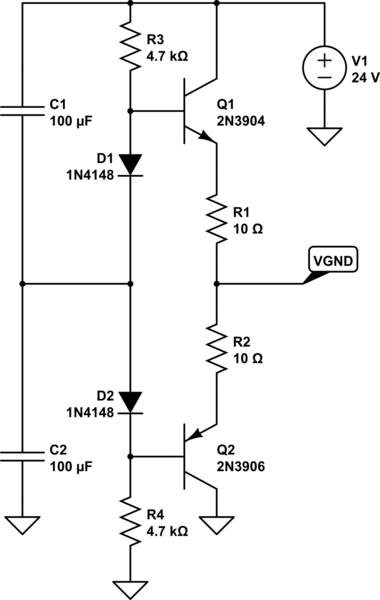 The above schematic also includes some emitter resistors. They help to set and stabilize the quiescent current, to allow some current sensing for overload protection, and to help avoid thermal runaway. The discussion gets complex, though, because it starts by arguing over the issues of how important (or not) the quiescent current actually is and eventually comes around to realizing that it is more about the voltage across the \$V_{be}\$ and/or emitter resistor. The focus then gets to the optimal crossover point. And frankly I don't think I want to get into all this here. So let me just say that you can "play" with the values a bit and see what works for you. Just put something in your circuit, so you can play with the values. You don't want them to drop too much voltage. But some. Perhaps try something that is between 2 and a factor of 10 more than the \$\frac{kT}{q}\$ voltage of some 26-30mV as a starting point?

Regardless, if you've made some accommodation for those emitter resistors, you can always just short them out. It may be just fine for you to do that. But at least you have a place to go to cure some observed 'problem' if you leave some room for them here. My value of 10\$\Omega\$ didn't get any thought from me.

Now for the opamp case. 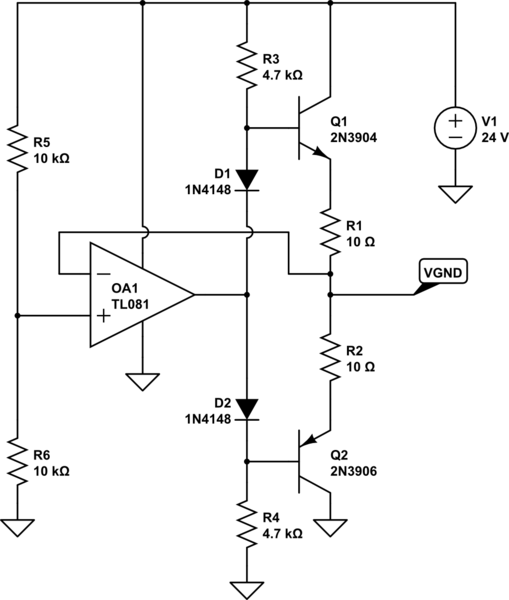 Adding in the opamp allows ditching the two earlier capacitors (used for some dynamic stability.) It will handle dynamic changes in loading and make adjustments to cope with transistor base loading variations. In this case, you want your negative feedback to come from the actual node you want under control. This is your VGND node. You don't want to control the center voltage of your two diodes. You want to control your VGND and let the opamp figure out the rest for you. So that's where your negative feedback comes from. The positive node goes to a voltage divider. You want the resistors to be as close to the same value as you can manage, clearly. I just used 10k because you did and it's not a bad value to use.

Also, you can connect the opamp output to the \$Q_2\$ base instead, or the \$Q_1\$ base instead. Or the middle of the two diodes, as shown. It doesn't really matter here, as all three of those nodes are well within the output voltage range of the opamp and the diodes just "stack." So it's not important. I used the mid-point of the diodes because it looks more like the first schematic. (Because of past experience, I might choose the base of \$Q_2\$ just because it reminds me more of where the VAS controls things in a more usual audio amplifier.)

You may consider a \$V_{be}\$ multiplier between the bases instead of two diodes as shown so that you can adjust the voltage between the bases for optimal operation. These are built from a BJT and some resistors and allow you to tinker with the biasing spread of between the bases of \$Q_1\$ and \$Q_2\$. The diodes as shown might not be enough, though usually they are fine. But different diodes behave differently and it is theoretically possible (while typical emission coefficients for diodes vs BJTs makes this unlikely) that you'd choose diodes which wouldn't get you where you wanted. 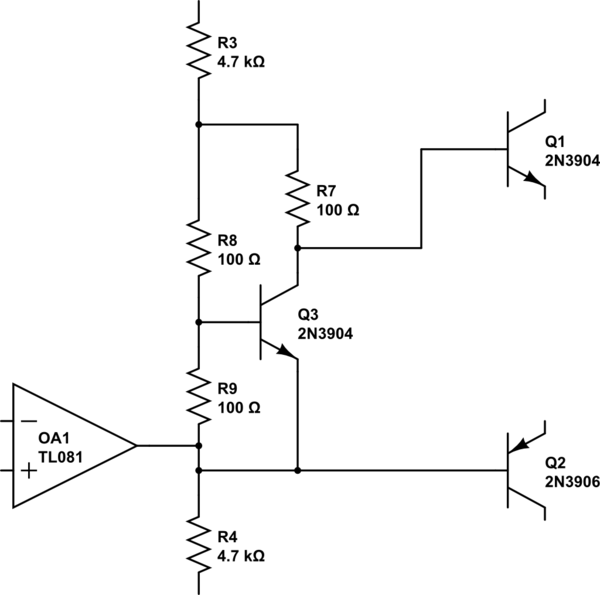 The output of the opamp would probably be set to the node where the base of \$Q_2\$ is located, as shown.

You write you're satisfied with 10.8V when you draw current from the positive rail. You shouldn't. You expect 12V, as the virtual ground is right in the middle. The difference comes from the base-emitter voltage of Q1. This can be compensated for by deriving the feedback from a different point, as Transistor has pointed out. With his modification, you'd get 12V over the load.

But this does not solve the question your asking: Why doesn't it work at all when drawing current from the negative rail. The answer is it does not work because you have not used an operational amplifier. The LM293 is a comparator with open-drain output. It sinks current, but does not source it. Replace it with a real operational amplifier, like the TL081 that was mentioned in another answer, and your problems are gone.

If you also want good dynamic bahaviour, you'll also need to bias the transistor bases like shown in the schematics from Jonk.

Edit: I wrote 12V because I neglected the protection diode D3. Taking that into account you can only expect 11.7V of course.

What about something like this? This circuit uses only 1 transistor. Virtual ground will be at collector. 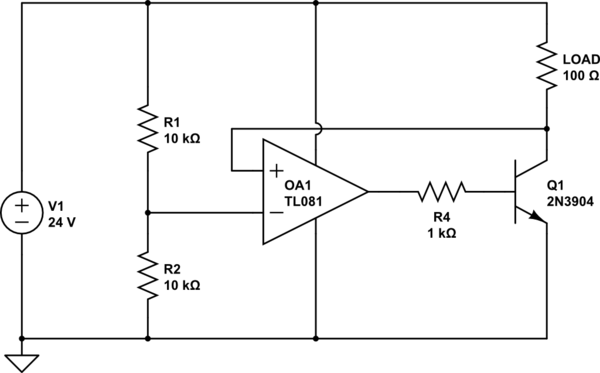 It depends what exactly you want to achieve. If you want to make ±12V source from 24V battery, and want to load approximately equal loads on both rails (let's say you want to have ~1A load on +12V rail, and ~1A load on -12V rail) it will be sufficient.

Not the answer you're looking for? Browse other questions tagged operational-amplifier push-pull virtual-ground or ask your own question.