I'm attempting to build a voltage regulator circuit for a DIY stir plate using a CPU fan supplied to an LM317 voltage regulator circuit. I have everything wired up on a board just like the diagram, but using 1kΩ and 10kΩ resistors (which according to this calculator should give the same voltage out). I'm feeding it 12V of DC power from a DC power supplying up to .3A. Measuring the Vout of the circuit without a load attached gives the expected ~12V and drops to ~0V when I dial the potentiometer down. However, once I add the fan, it won't move and the Vout measures a max of 2.1V.

The fan claims it needs 12V and .1A - I'm assuming this means it's ~120Ω. I've also tried swapping it for resistors that I had laying around.

For diagnosis, I've tried swapping my R1/R2 resistors from 1k/10k to also try 10k/100k, 100k/1m, and 220/1k (no 100 laying around). It's pretty common to see these as different combinations on other stir plate instructions I've read, and the LM317 calculator says they should give the same voltage. All of these combinations gave nearly identical Vout for the variety of loads. The voltages also stay the same with or without the capacitors, which I read were optional.

Can anyone point me towards what's probably wrong, or how to further diagnose it?

EDIT: Solved! I had the LM317 flipped around backwards due to some bad labeling on the bag the component came in. I checked another company's data sheet and flipping it around fixed it.

Solved! I had the LM317 flipped around backwards due to some bad labeling on the bag the component came in. I checked another company's data sheet and flipping it around fixed it.

I have recently worked on the variable voltage supply. Which is working accurately. I have used the following simple and easy circuit which contains:

6-Transformer (Step Down with 18 volts output)

Circuit Diagram is given below ( simple and easy ): 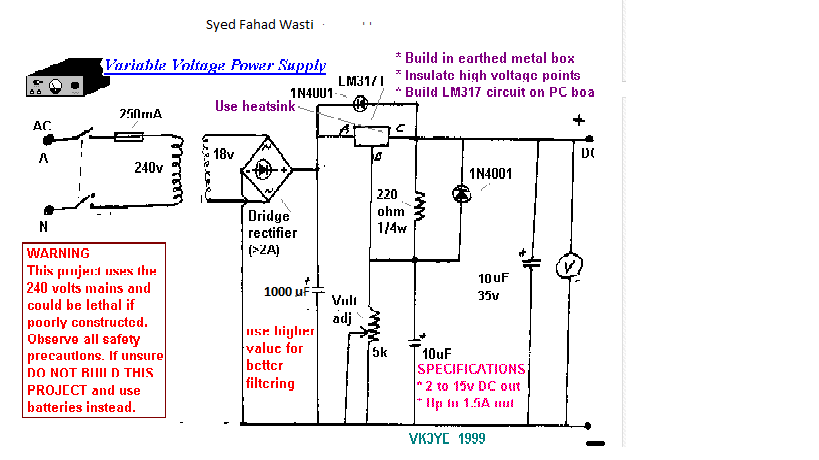 6
Is it normal for LM317 to give a higher voltage without a load?
4
LM317 voltage regulator short circuit
3
How to improve load transient response of an LM317 voltage-regulator powering an audio amplifier?
1
Can I power two linear DC regulators, each running a motor, from a single 12v source?
0
A question about reading and calculating thermal resistance of a voltage regulator from its datasheet
0
LM317 Vout drops on load
0
How to make LM39302R (voltage regulator) work?
3
LM317 regulator with PNP pass transistor voltage drops when adding load
0
LM317 Vout instability under load