How to run 25 RGB LEDs by an arduino Duemilanove

I am constructing a 5x5 LED grid that has an RGB LED under a plastic cover, and a piezo sensor that changes the RGB LED to one of 8 colors when pressed.

So as far as I can tell I need 75 outputs for the RGB LEDs, plus 1 more to power everything that can be daisy chained between the 25 RGB LEDs. I will also need another 25 inputs for the piezo sensors and 1 ground that can be daisy chained together.
The Arduino has nowhere near enough I/O pins on it but I have heard of a thing called multiplexing. However, I am not sure if you can run RGB leds with multiplexing.

If this helps at all I am using a led strip that I can cut into 3 LED sections to put under each square.

I hope I was not to vague with my question, thanks for your help.

I can see two ways of achieving this.

1-Using a technique called Charlieplexing to control your leds. With 10 output pins you would be able to control 90 normal leds. The main disadvantage with this technique is that the leds are not always on. They flash really fast, causing a reduction in the brightness of the leds. It's also a bit complicated to code and I'm not 100% certain that you could make it work on RGB leds.

2-Using Shift registers. Like this one. With shift registers you can ouput data in a serial fashion and output it in parallel. Depending on the number of pins you are willing to use, you'll have to buy more or less Shift registers. The main idea is something like: output the new states of the leds, one by one (separating your signals by outputting HIGH to the SRCLK) and then "applying changes" by outputing HIGH to RCLK. If you think about it, you can basically cascade to an infinite number of outputs. You'll need a lot of shift registers though and the response time will probably be slow.

If I were you I would use something like this:

These are 25 12mm RGB LEDs that you can drive through a simple serial interface. Just two general purpose IO pins can drive the entire strand. You get 256 intensity levels per component (24 bits per LED in total) and the built-in PWM driver makes them pretty much "set and forget". You can also connect multiple strands together, and address 50, 75, 100 or more LEDs. Just beware of the power requirements. 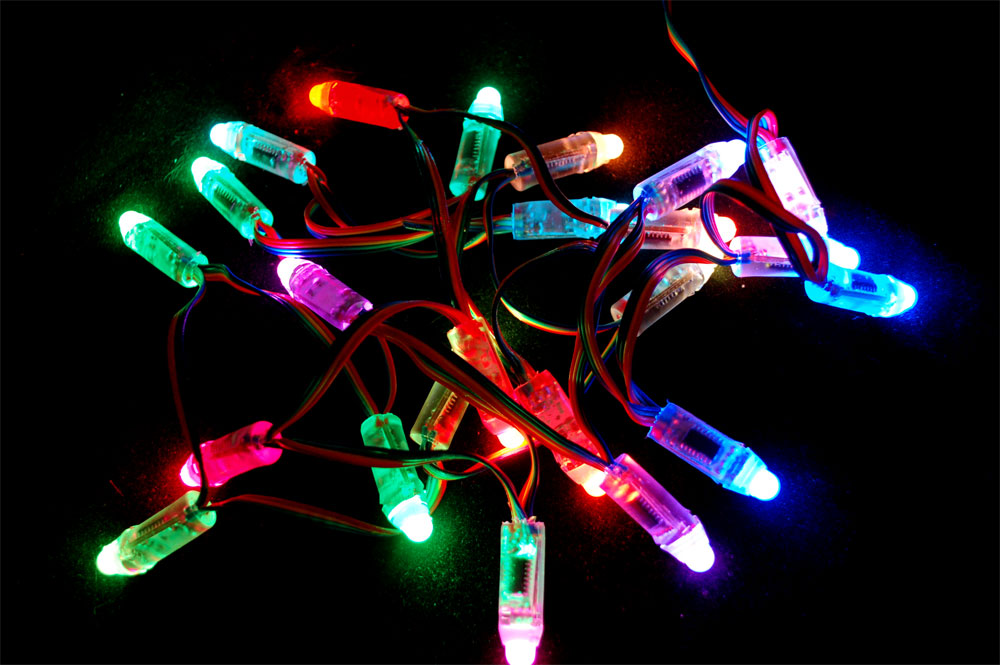 Not the answer you're looking for? Browse other questions tagged led rgb arduino or ask your own question.

20
How many individual lights can an arduino control

5
Looking to create 36 channels of PWM control for LED sculpture
2
Simple solution for driving a large-ish RGB LED array with PWM
0
Powering high power LED modules/plates (series parallel internally)?
0
Running up to 40M (130Ft) of WS2801 IC LEDS
0
Circuit for supporting, common anode AND cathode RGB LED Matrices
4
LDR + RGB Led = Color sensor. How to calibrate it?
2
how to get the RGB value of a color using phototransistor or photodiode?
2
Why is my RGB LED strip passing current through the transistor?
1
How to combat voltage drop on a 5v addressable led strip
0
Controlling DC voltage with Arduino