Is there any way to tell the difference between a slow blow and a fast acting Fuse? I had one blow in my amp and I know its 125v 5a, but i'm not sure if it is a slow blow or fast acting fuse.

Is there any way to discern the difference after one has been blown?

Is there a different schematic symbol for the two?

I was an electrical engineer in the 1950s, part of my work was concerned with testing and selecting fuses. I recently gave a talk to my local amateur radio club on the subject, and what follows is from the script I wrote for that talk. I think it is relevant to the discussion here.

A surge protection fuse must accommodate three overload regions. For a short circuit it must blow fast in the normal way. It must also blow for steady overload currents just like an F fuse, but it must tolerate continual brief over-currents -- say ten times its rating -- without blowing or deteriorating.

Three main techniques are used to accomplish this. The simplest is to increase the thermal mass of the element, using a thicker, and therefore longer wire (to get sufficient resistance to heat up), wound round an insulating core, with careful control of the spacing for consistent operation. Pictures of this type and the next are in @Russell McMahon's answer. I have not seen an explanation of the fuse with the wavy wire.

The second technique employs a three part fusible element.The first part is a wire with a high melting point so that it will absorb surges, while still blowing fast on extreme overload. This is similar to an F fuse working at well below its rating, so it will not protect against overloads close to the rated current. The second part gets round this, providing the protection for currents that are closer to the rated value but not high enough to blow the thin wire itself, and consists of a lump of lower melting point material in series with the main wire, that heats more slowly than the wire. The third part of the element is a stout spring of relatively high resistance material, helping to heat up the lump, and pulling it rapidly apart when it melts. The combination of lump and spring, with its relatively high thermal mass, also allows the surge to pass, but provides the protection for longer term but lesser overloads. There are many variations on this design and it gives manufacturers a lot of parameters for adjusting the fuse characteristics. Occasionally, as in the image above, a by-pass wire across the spring is used to adjust the characteristics of the fuse.

The third method employs the 'M' effect. In the 1930s Prof. A.W.Metcalf (hence the 'M') researched a phenomenon where the tin alloy used to solder the ends of the fuse seemed to affect the time to blow, reducing it in a strange way. He found that a spot (the 'M' spot) of solder on a silver wire element did not affect the short circuit performance, but it did reduce the time to blow on a sustained lower current. In this case, at the lower temperature of the wire, the solder diffused into and alloyed with the silver to create a region of high resistance in the spot, which would glow red hot, with the wire rupturing next to it. This, with suitably chosen alloys, nicely gives the characteristic needed for a surge resistant fuse. A problem with this type of fuse is that occasional currents just above the rated value may cause some unwanted diffusion to occur, altering the fuse characteristics without visible change. 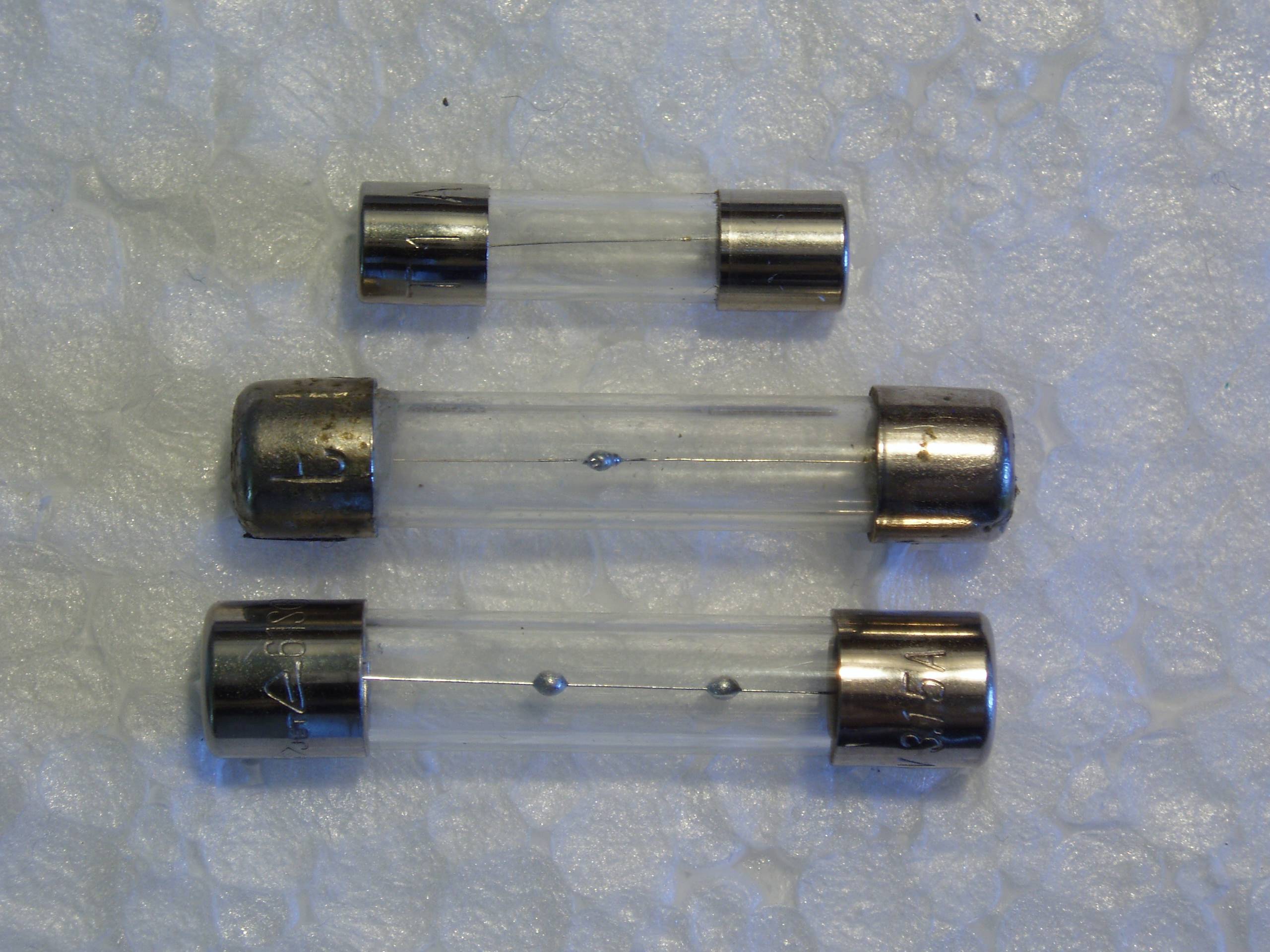 Here is a picture of three M spot fuses, and yes there is a tiny spot on the top one.

Usually the information is on the fuse itself. On most fuses, there is an inscription which identifies the fuse. For example, one of the fuses I have in my desk is marked as F10AL250V. That means that it's a fast fuse rated at 10 A up to voltage of 250 V. Another I have is marked T500mAL250V. That means that the fuse is slow acting rated at current of 500 mA for voltages up to 250 V.

The marking will be somewhere on the case of the fuse. On glass tube fuses, it's usually engraved (sometimes very badly) on the metal part of the body. There is no good way to non-destructively detect what type of fuse a fuse is if it is unmarked.

Every slow blow fuse that I have seen as far as I recall, had a coiled wire for the fusing element.

This is is a generalisation which no doubt does not always hold, but it works in most case.

In a fast acting fuse the thermal dissipation in the wire acts to melt the wire portion that is carrying it. There is some effect from adjacent heat but much reduced from a slow-blow.

In slow blow fuse the wire is (generally) coiled to provide proximity to heat energy from the adjacent wire plus the cooling path is increased by having a much longer wire length and thus thermal path to the mounting points. The accumulated heat from adjacent sections helps blow the fuse. The slow blow fuse has "thermal inertia" whereas a fast blow has a very short thermal time constant.

Many slow blow images Here - all glass ones that I looked at have spiraled wire. 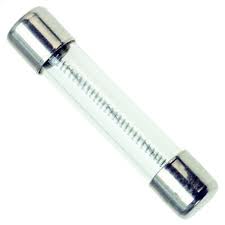 I've seen it suggested by some sites only that slow blow use lower melting temperature materials - but this is not a certainty. 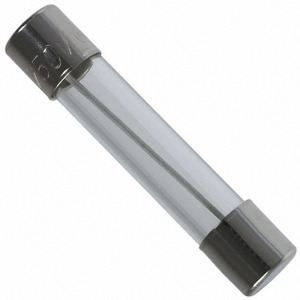 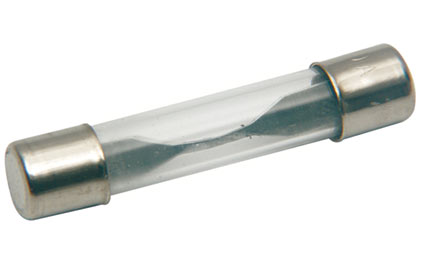 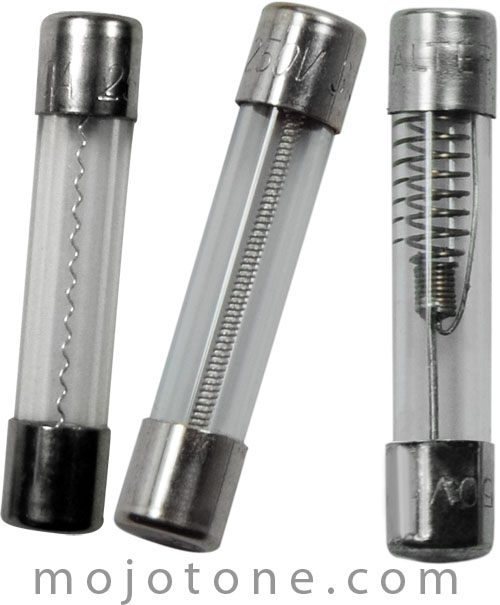 Just in case any one is wondering the T stands for Timed which is the correct term for a "slow blow" fuse, F as mentioned stands for Fast. If it's a Power Amp then it would make sense for the fuses to be slow blow (also called anti-surge), bearing in mind you have an inductor (the transformer) feeding large capacitors so there is going to be quite a surge at switch on. If you want to play safe use quick blow fuses but they may blow easily and often. The fuses are really only going to protect the transformer any way and possibly the rectifier to some extent, they are unlikely to prevent an output transistor being damaged as that will most likely happen first in the event of a fault, The transformer isn't going to overheat a great deal or catch fire before a slow blow fuse works :-) Incidentally, A good design should have F or T plus the fuse rating marked on the PCB where the fuse holder is.

While all this discussion on types of fuses is very instructive, I wonder whether it answers the underlying question. I believe that the original poster wants to know what fuse to use for replacing a failed one. The answer to this depends on the application. The main purpose of a fuse, in any application, is to prevent a fire. If the fuse is in the loudspeaker circuit, ie, in series with the loudspeaker as a load, then it needs to tolerate occasional overloads, but open on continued overload - so, medium slow blow. If the fuse is in series with a transistorised power supply's pass transistor, then it needs to be a very fast blow. If the fuse is in the mains input lead before any power supply unit, then it needs to sustain the start-up current required to charge the main filter capacitors - so, slow blow. In summary, look at the application.

4
Breaking capacity for fuses at mains inlet
0
What fuse can I use to replace a Hitachi FN00373
2
What is up with this fuse?
1
What is the difference between "Slow Blow" and "Time Delay" fuse?
1
Is there a standard stating how fast a fast fuse is, how slow a slow fuse is?
1
What is the name of a fuse with a half spring?

11
Should I use slow fuse or fast fuse?
22
Why did my fuse blow after 3+ years of no problems?
0
What fuse can I use to replace a Hitachi FN00373
8
Why are fast blow fuses more tolerant to small over currents than slow blow fuses?
0
Slow-acting trage fuse unexpectedly blowing
2
fast or slow fuse in transformer
1
What is the difference between "Slow Blow" and "Time Delay" fuse?
1
Help identifying fuse 3.6 x 10mm 125 V, 2.5A cylindrical maybe ceramic?
0
Can I use a 315 mA slow blow fuse instead of a 375 mA slow blow?