using a photoresistor as a control of speaker

I got a project to show a group of kids in the community center with some circuits. I am not majoring in EE so I will instead to show something simple. I borrow a snap circuit kits and I am going to build a circuit of generating a tone in a speaker (the diagram is given by the manual of the product). The circuit is something like the following 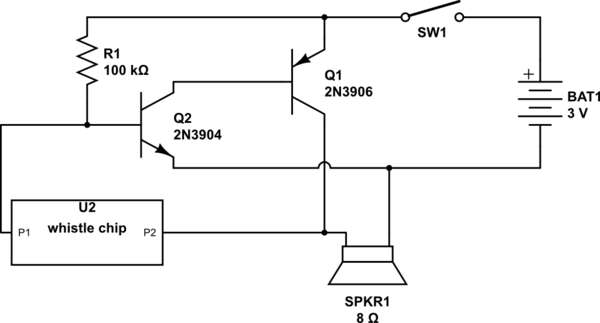 The whistle chip will generate a single tone which is played by the speaker.

I am trying to add a photoresistor as a switch such that it play the tone in darkness only. I find an idea online http://www.learningaboutelectronics.com/Articles/Dark-activated-switch.php for similar purpose. So I modify the circuit as follow 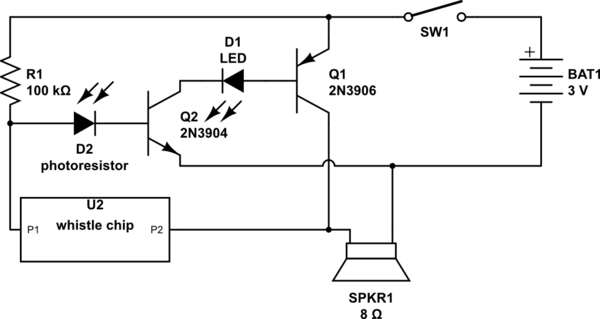 But I find that when I switch on the circuit, in the light, the LED will be on but no sound generated. When I shine a light on it, it beeps and the LED becomes so bright. But if I block the photoresistor, no sound and the LED is totally off. This is opposite to what I want. Any idea to fix it?

Above modification make the dark-activated switch works. But when I impose that onto the sound control so to switch the Q1 on/off, it doesn't work. I start to think am I suppose to control Q1 instead of Q2 because Q1 is connected to the speaker not Q2. Do you think it is correct? Anyway, here is what I try 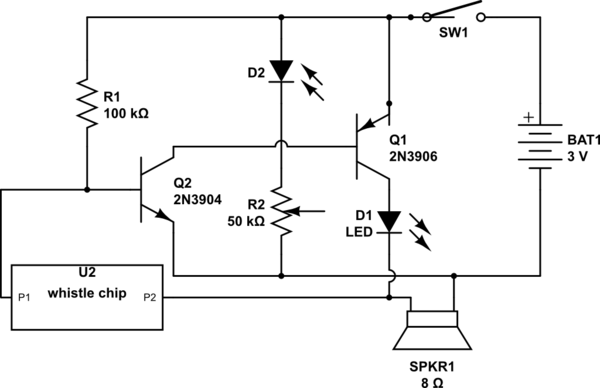 In this schematic, if I replace the speaker with a wire, the photoresistor acts as a dark switch, blocking it will turn the LED (D1) on. But if I put the speaker back. This circuit doesn't work. Blocking the photoresistor will not change the LED any more. I wonder if it is because the inductance of the speaker has something to do.

Lacking solid knowledge of circuit, I spend quite amount of time to learn something basic on the circuit. Before, I am trying to apply the dark switch to control the base of Q1 (PNP) or base of Q2 (NPN) based on the above circuit. Both scheme are not working well. I did some analysis. I think the emitter of Q1 connect to the speaker. Controlling the base of Q1 with photoresistor does not really kill the current into the speaker when there in dark, I hear chirping noise from the speaker. I don't want that. Similar case happens in Q2 when I use dark switch on the base of Q2, the base current change so the current split into the whistle chip change as well, it induces chirping noise as well. I want to make it like a sharp switch. After some try, I make the following change. 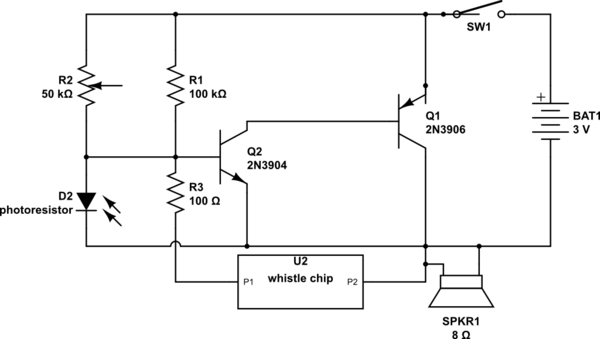 R2 is a variable resistor used to tweak the minimum current going into base of Q2. I separate the photoresistor from R1 and whistle chip so to reduce the chirping. But then it won't beep because Q2 needs the current input from whistle chip so to create the tone (sound at some frequency). So I add the R3 to couple the base of Q2 to the whistle chip. Now I have a bright light shinning on the photoresistor, the sounds stop (no chirping), if I block it, it beeps. But here comes the problem I have before, the dark switch is not sensitive enough in the room light; so it starts to beeps when I turn on the circuit. I am looking for an idea to stop the beep at the beginning in room light and starts to beep once the photoresistor is blocked.

Ignoring whistle chip for the moment...

Also, you can consider placing a small resistor (100 ohms) in series with the LED to control the base current of Q1.

Also, measure the voltage across the photo resistor both in dark mode and light mode.. you should solve the issue there

I don't know how sensitive the whistle chip is, but if you replace R1 with a 100k potentiometer, and use the center leg to attach the photoresistor, that would give you quite an easy way to adjust the sensitivity of the circuit.

The existing circuit would be the equivalent of the pot turned all the way to minimal resistance on the whistle chip side, and turning the pot the other way should make the LED much more sensitive.

Quite possibly, the range of a 100K pot might be too much to be useful. (E.G. Turning it back 1/4 of a turn might make it so sensitive that the LED will be fully lit even in very dim light.) If this is the case, and you'd like to correct that, you can switch to a smaller pot and add back and R1 such that the resistance of the Pot + R1 = 100k. A 50k R1, plus a 50k pot (or similar based on experimenting) may give you a more useable range. If the pot is too hard to get "just right," consider using a trim pot that uses a screw gear to adjust the setting and hold it there.

Not the answer you're looking for? Browse other questions tagged photoresistor or ask your own question.

8
Basic circuit to keep LED either on or off depending on night/day
2
Reversing a Photoresistor
0
Photocell and Relay switch not working properly
0
How to delay the transistor turning on using a photoresistor?
0
Choosing resistance in series with a photoresistor for best light-measurement resolution
0
S8050 D331 base resistor calculation
2
How to wake up ESP8266 with light change?
1
Photo resistor night light not working
0
Photoresistor power switch for arduino, does this look correct
0
Reduce active region of NPN transistor