Why does my power op amp IC (TI OPA549) thermally malfunction? IC works electrically perfectly, no oscillations or anything. By thermal malfunction I mean that Rj-c thermal impedance rises from default value (1.4°C/W) to about 6...7°C/W.

What kind of mechanism can cause such malfunction?

PCB has three identical channels (A, B, C) where two of them work flawlessly (B, C) but one (A) constantly malfunctions after short time of use (I have tried three chips).

Below you can see IC and its three important spots center (red), edge (green) and case (blue). With maximium stress ( ~ 40W), channels heat up as follows (measured with thermal camera): 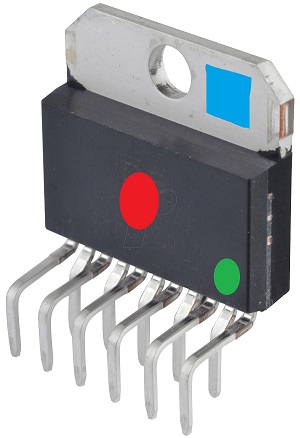 Thing I have considered:

As Chupacabras brought up, I have noticed that problem has something to do with the Vcc line.

I previously had a common heatsink for all channels, but then I installed individual heatsinks for each chip. This had unexpected results:

I also figured out that when I was using linear lab supply, no malfunctions occurred. By default I have been using switching (65kHz) PSUs connected in series, where middle tap is ground.

However, I'm unable to measure any kind of differences in Vcc pins.

I'll go out on a limb, and suggest that you look carefully at your heat sink. You label your 3 units A, B and C, and it's A which gives the problem. I'd guess that you have a single heat sink, and the three units line up on a common extrusion. My guess is that, at the A end of the extrusion, the mounting surface is not perfectly flat. So you're getting tight contact at one side of the IC, but not on the other. This gap is large enough that, even with thermal compound or a Silpad (and you are using one or the other, I hope) the thermal resistance across the gap is much too great.

The defect might be a slight protrusion around the mounting screw, or it might be a bend in the surface. Take a good straight-edge to the area in question, and verify that there is no distortion from a perfectly flat surface. Make sure to check in both axes. It might only take a few thousandths of an inch to be a problem, so be careful.

Not the answer you're looking for? Browse other questions tagged operational-amplifier thermal or ask your own question.