Does the stability of a circuit depend on its feedback topology?

I am reading an article entitled "A Comparison of Two Approaches to Feedback Circuit Analysis" here.

As you can see in figure 4 and figure 5 from the article, there are two feedback topology with the same free-input source:

The first one is shunt-shunt feedback and the second one is series-shunt feedback. The return ratio calculated for two cases are exactly the same and equal to 119. However, the two port analysis results in different loop gains.

For that reason we use return ratio instead of two port analysis for stability analysis.

My question is does the stability of a circuit not depend on its topology?

Should the two feeback toplogies have the same stability characteristic?

I mean if one is stable then the other also stable. 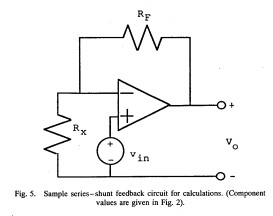 anhnha, for my opinion, the author of the paper (referenced by you) has caused more confusion than necessary. I think, he should have started with the simple example as shown in Fig. 4a (also shown in your text) in order to make clear what he wants to show.

As a consequence, we would make an error if we would consider only the inverted portion as given with (1). And this would be the case, if we would apply Blacks classical feedback formula involving the return ratio RR only (forward gain divided by (1+RR). Note that in this paper the term "return ratio RR" is used instead of the term "loop gain" which is in common use today.

That is the main purpose of Hurst`s paper: To show that the closed-loop gain as well as input and output impedances of feedback systems must NOT be calculated on the basis of the RR only if the feedback topology allows such a "direct" feedthrough portion of the output signal as described above under (2). In this case, there is a difference between the real existing return ratio RR and the product "af" as defined for the classical model in Fig. 1a.

Note that the author performs the following step: He transfers the block diagram of a real existing feedback system (with signal feedthrough) a shown in Fig. 1b into a new simple (ficticious) block diagram with two blocks only (Fig. 1a). His intention is the following: The loop gain "af" of this new simplified system can be used to calculate the closed-loop parameters (gain, input/output impedances) using the well-known formulas involving the expression (1+af).

Remember: Due to the very small output resistance of opamps, this feedthrough portion normally is neglected in inverting opamp applications (we set loop gain=RR). However, as an example, this portion (2) is responsible for bad attenuation values of Sallen-Key lowpass stages for rising frequencies in the stop band region (opamp gain goes down and output impedances increases).

As a consequence of his considerations, Hurst shows in part IV of his paper that the product "af" and the return ratio RR are identical if there is no extra forward gain in the feedback loop (theoretical case only) and/or if the output impedance of the main amplifier can be neglected.

Finally, regarding the title of your contribution: Stability analyses are NOT influenced by all the considerations as mentioned in the text. Stability properties are determined by the return ratio RR only and no two-port analyses are necessary because "forward contributions" (if they do exist) do not influence stability aspects. You will have noticed that the term "stability" is not mentioned in Hurst`s paper.

Based on the return ratio RR, the closed loop gain and the input resp. output impedances for opamp circuits with negative feedback can be calculated using the open-loop values devided or multiplied by (1+af). However, this is allowed only when the conditions of part IV of Hurst`s paper are fulfilled (af=RR). In most cases, this is the case for opamp applications:

EDIT (answer to the question):

The sentence under question (page 256) concerns Fig. 2 as well as Fig. 5 of Hurst`s paper. It is obvious that after removing the current source Iin (Fig.2) and shorting the voltage source Vin (Fig. 5) both circuits are identical. Hence, the classical definition of the return ratio RR, which does not take into account any forward signal transmission, will be the same. In this case, the opamp internal output voltage (gmRout) is considered as the only existing driving source. Hence, the expression of RR is given simply by the voltage divider rule and the driving voltage gmRout.

Of course, the situation is different when the contribution of the forward signal path is taken into account - because we have in the example circuits two diffent sources at two different locations. Therefore, both expressions for the product "af" are different.

Hence, the author not only has shown - taking forward feedthrough into account (if it does exist!) - that for one single circuit both expressions ("RR" and "af") can be different but he also has demonstrated that in case of two diffent circuits with EQUAL RR the products "af" can be different. This part constitutes just another example to demnonstrate the possible difference between both expressions (RR and "af", resp.) used by the author.

Not the answer you're looking for? Browse other questions tagged circuit-analysis circuit-design feedback stability or ask your own question.

15
Stability (phase margin) analysis in real feedback circuits
2
Stability and loop gain of negative feedback systems
5
Effect of zeroes in system stability
1
Stability in control theory and electronics
1
A question about loop gain, feedback and stability of an op amp circuit
1
AC analysis of opamp loop in LTspice
1
Calculating the transresistance in a multistage voltage-shunt(shunt-shunt) feedback amplifier
1
Stability at loop gain <1 and 180 degree phase shift
1
Question about feedback in a current reference