Design for a balanced (positive and negative) HV DC regulator

I'm trying to design a high voltage DC regulator for driving a PZT that will provide both +200 and -200 V outputs referenced to ground. The input is a rectified AC waveform that will provide UK mains voltage (230 V ac r.m.s.). Since it's driving a capacitive load only, the current requirement is small (less than 15 mA per rail).

I've got a few ideas for how to do this, but the problem is that they are based on positive voltage regulator designs. I'd like to build something that works for both positive and negative rails of the input.

The most promising idea I have is to take a good design for a positive regulator and convert it into a negative one, and pair them up with a common ground. I am thinking of basing it on the "Maida" style floating regulator. Pete Millett has provided an updated version of this design that uses a high voltage MOSFET and LM317, freely available on his website: 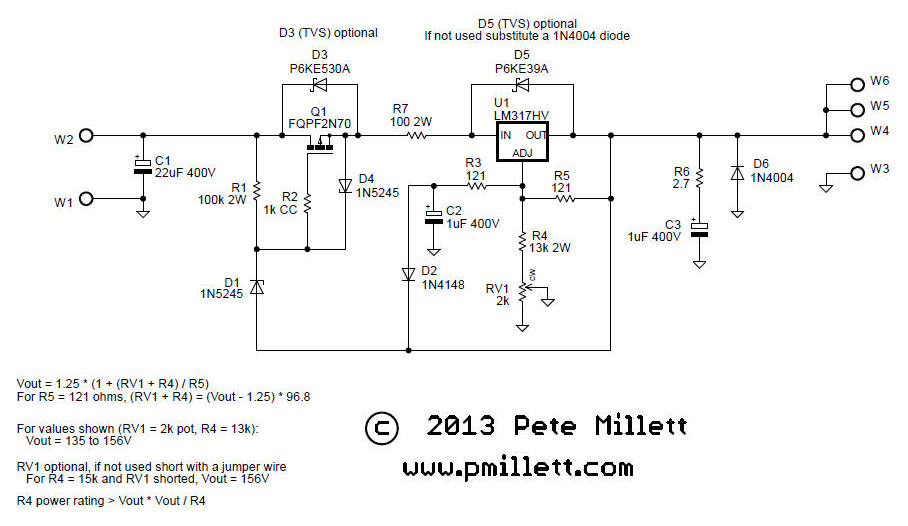 The rectified, filtered mains is input to the MOSFET to perform coarse regulation and fine regulation is performed by the LM317 which only sees a fraction of the total input voltage due to the zener diode D1. The design shown is only for a positive voltage, but I would like both positive and negative varieties. I imagine that it would be possible to adapt this circuit to instead work for negative voltages simply by using a P-type instead of an N-type MOSFET and an LM337 instead of an LM317.

Can anyone think of a reason why the above idea might not work? In particular, I wonder if any difference in the time it takes for each rail to come up to full output (given tolerances of capacitors, differences in attached load impedance, etc.) would have any damaging effect on the sensitive components such as the MOSFET. Will the suppressor diodes in parallel to the MOSFET and LM317 prevent such problems (e.g. by blocking a reverse current)?

I'm happy to hear any other ideas. The output doesn't need to be regulated heavily so perhaps there's a simple approach I'm missing.

We've designed piezo drivers for many years. The piezos are typically driven with a triangular or sine wave for use with interferometer alignment. If this old post is still of interest I can try to have a schematic reduced to a B size.

Not the answer you're looking for? Browse other questions tagged power-supply voltage-regulator high-voltage dual floating or ask your own question.

2
Dual polarity vs dual rail power supply
1
Positive and Negative Voltage Regualtors
9
Why is it usually the case that the negative rail for ICs needs more decoupling capacitance (has worse PSRR) than the positive rail?
1
Negative voltage from positive output DC/DC
2
Arduino controlled bench power supply
1
Negative input, negative output switching regulator?
1
On a 3-terminal bench power supply (+, -, GND), are there positive and negative drivers behind each of the terminals?