I'm reading through Make: Learn Electronics and it has the following schematic for charging and discharging a capacitor. (Figure 2-80) 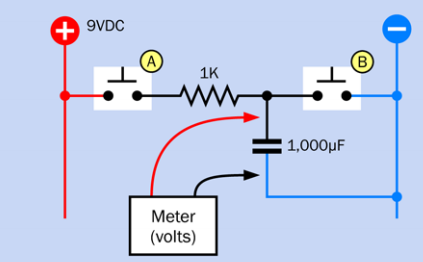 I understand that if I close switch A then I'll be creating a complete path for the electrons to flow, so the capacitor will charge.

I understand that if I close switch A then I'll be creating a complete path for the electrons to flow, so the capacitor will charge.

Because you have connected both sides of the capacitor together through switch B. This means that the potential or voltage on both sides must be the same. If it's not the charge will flow (creating a current) until the voltage is zero.

Wouldn't the capacitor discharge anyway without closing B? (There's already a complete path?)

No. With the voltmeter out of circuit and both switches open there is no "circuit" or complete path.

What is the exact path the electrons will use when B is closed? (visually)

(Conventional) current will flow from the top of C1 through B to bottom of C1. The electrons will actually flow the opposite direction.

¹ The RC time constant or \$ \tau \$ is found by multiplying R and C. In your circuit this is

Disharge time will be determined by the internal series resistance of C1 and the resistance of switch B when closed. Let's say the sum of these worked out to be 1 Ω then the discharge time constant would be \$ \tau = RC = 1 \times 1m = 1~ms \$. There's a little problem to watch out for though: If C1 is charged to 9 V then the initial current flow will be \$ I = \frac {V}{R} = \frac {9}{1} = 9 ~A \$. If the switch isn't a beefy one the contacts will arc and eventually burn out. A practical circuit would have a resistor in series with B to limit the current to a safe value. e.g., 10 Ω would limit the discharge current to 0.9 A. I'll let you work out the discharge time.

Imagine the capacitor like a rechargeable battery. When button A is pushed, it charges the capacitor, but once the capacitor becomes full, it will stop charging (it wont stop abruptly, it will slow down exponentially. The resistor determines the rate.)

When B is closed, the current will go through the button and around to the other end of the capacitor. The capacitor is then discharged.

Now this is current I'm talking about. Electrons go the opposite way.

Here is a visual sequence of events. 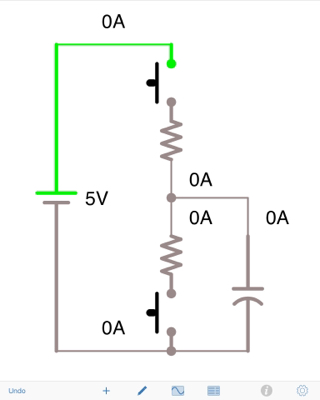 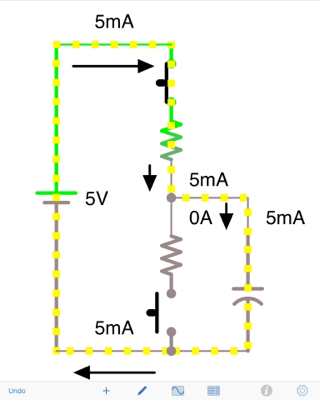 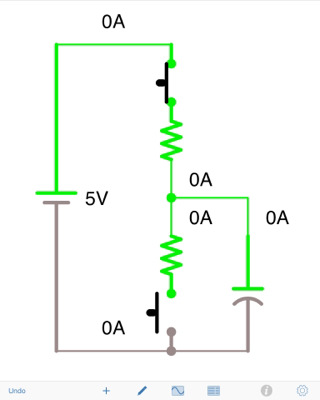 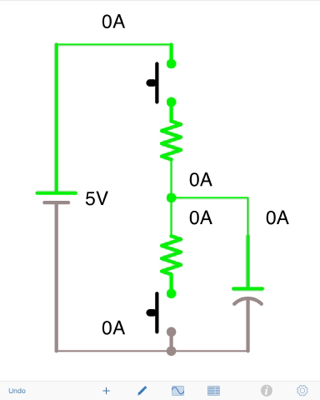 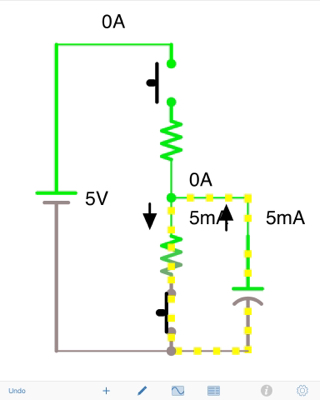 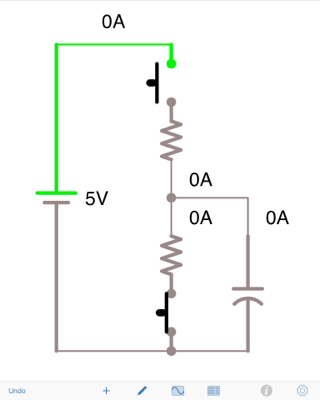 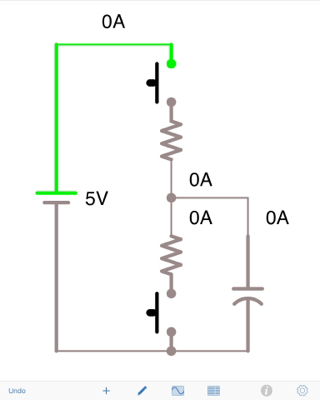 (Sorry if it is long. Here doesn't accept gifs)

Not the answer you're looking for? Browse other questions tagged capacitor capacitance button or ask your own question.

0
Discharging a capacitor to a battery supply [simple circuit]

0
Capacitors and capacitance
4
Capacitor vs Diode rectifier
0
How do capacitors maintain their charge?
0
Correct design for large contactor circuit?
2
exactly why does a capacitor build up charge when hooked up to a battery?
0
Discharging a capacitor to a battery supply [simple circuit]
2
CDI ignition: Isn't the coil charged anyway?
1
Discharging a capacitor quicker, using an exterior time varying magnetic field?
0
How can this capacitator discharge? (Make: Electronics experiment 9)