In principle is it possible to recharge AA/AAA/9v batteries in the device they are currently plugged in?

There are numerous smart chargers for AA/AAA and 9V batteries. The process requires taking all batteries out charging then putting back in. When you are potentially dealing with multiple such devices the experience can only be bettered by carefully modding any device to recharge batteries and skip on the in out routine.

Specifics to test this in my case is a 3V - 2xAA device(vacuum dust collector) and an "Intelligent" battery charger with 12V input and 4x AA/AAA charging slots.

So I am happy with modifications of any sort with the ultimate outcome of : 1)Allowing in device recharge 2)Allowing greater distance between where the device is resting and where the charger unit is. Think of USB charger + cable as a guide 3) Make the principle generic so it can be used on any device and any charger

Extras : If possible use a high capacity battery bank(26800mAh for examples sake) to power as many battery slots on the AA/AAA charger. Battery bank used in this example is a 3x USB with output DC 5V/5.5A(max) total and 2.4A individual USB total.

The challenges I am aware of : 1) In the device AA/AAA batteries are connected in series with a simple metal piece spanning over both battery terminals. The 4x AA/AAA charger connects to each batteries +/- poles individually. So this might be a problem as the charger needs to adjust output to each individual battery's condition ...

How do you temporarily ( mechanically or electronically ) gain individual access to each battery given they are all connected in parallel inside the device? Modding/Reworking the insides of the device is fine... should be generic solution as most devices use the same Spring to metal plate hardware to raise input voltage from multiple AA/AAA batteries.

2) USB Cable length effect on the AA/AAA charger output. The charger expects batteries to be in the slot and not 1-2m away. Even if the charger might be capable of delivering whatever voltage is needed to offset the length etc. Being an "intelligent" charger means it may interpret the new circumstances wrong ... 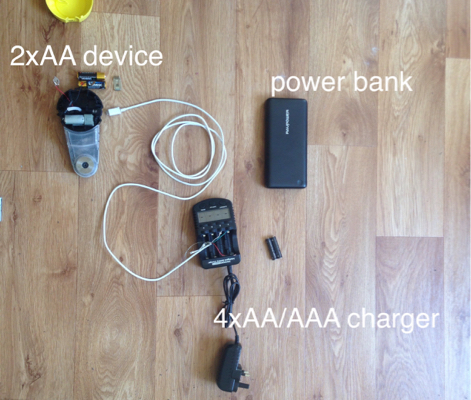 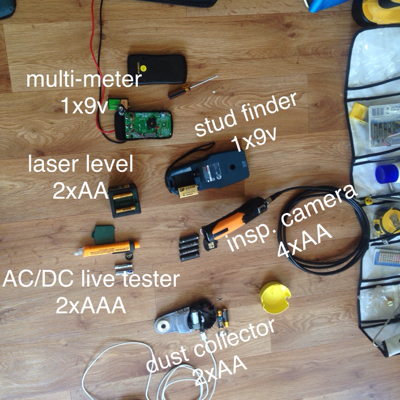 While there are complex ways of achieving this, a simple method that is good enough for many situations is possible. Chargers that charge 4 x AA or AAA cells usually do so either with

Below I use "toy" to refer to the target device to be charged. Could be model car, Pokemon, toothbrush, fan etc.

Appliances may have 1 or 2 or 3 or 4 (sometimes more) cells, usually in simple series. Some device use a centre tap for 1+1 or 2+2 etc cells. Examples may be model toys with motors that change direction and a split +/- supply is used rather than using eg H-bridge drivers.

The simplest and not vastly expensive option is to provide X isolated chargers whose outputs float relative to all the other chargers outputs. These would usually be capable of charging 1 or 2 cells in series.
Each toy then has a wiring loom that maps either individual cells or pairs of cells onto their own isolated charger.

The key is that all outputs are isolated from all other outputs unless connected in some desired manner.

If/when this gets hard and/or mind boggling

The following is "doing it the hard way" for example's sake.
In this case IF the chargers can charge two cells we could have used just 2 chargers for a single series string of 4 cells. I've used 4 chargers as if each can only charge 1 cell.

Call the connection points T+ T43 T32 T21 T- You can work out what that means :-). Wires are brought out from the 5 termination points to a universal connection socket. Each toy has a socket wired to suit the charger banks standard patterm.
In this case the pattern is

Each charger "sees" a single cell.

You COULD have used

The wiring to suit each toy is in its socket. The 4 (or more or less) are chargers are wired in a standard manner with each output isolated unless joined by the socket in use.

4 x floating chargers at left have mutually isolated outputs. Connection to chargers is by a consistently wired "plug" - in this example, 8 pin. 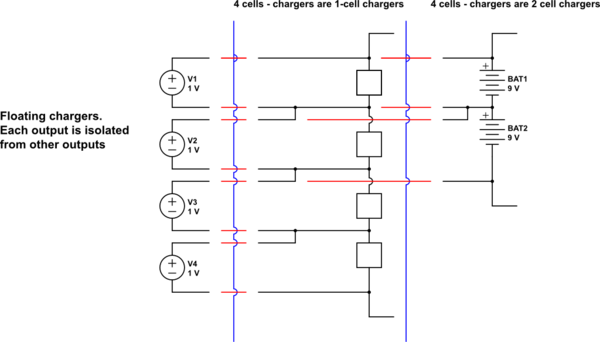 This principle can be extended to 9v or 12v or ... batteries as desired.

Not the answer you're looking for? Browse other questions tagged power-supply battery-charging charger or ask your own question.

8
Are 4xAA DIY Gadget Chargers Safe?
0
can you make a generic smart charger?
2
Limiting or reducing current to charge low-capacity lithium batteries
0
Charging a bank of batteries in series with a resistor
2
Can I charge my AC rechargeable hearing aid batteries via USB PD with converter?
1
can I charge battery at the same time as using it if it is the new usb c pd
2
LiFepo4 RV battery bank, charge from beefy alternator setup