TV screen in still photo: Why are there dark, blackish bands?

I was trying to capture the scanning process of a CRT TV screen in a photo. It gave me these dark, broad bands, shown below:

I'm trying to understand the cause for this banding. However, I couldn't understand it clearly in very similar questions here, here, or here. All web sources I visited very briefly explained it as a difference between the scan-rate of the TV and the camera, and none provided a diagram.

I assumed this, because out of 10 photographs I took, I found only the above 3 types of photos, and none of the type shown in Fig. 3 or Fig. 4:

I also assumed that the camera is much faster than the TV scan rate, so it could take picture in an instant.

My question is, Have I assumed correctly? or is something else going on?

(please also explain other possible situations, such as this one in Fig.5. I didn't experience it myself. It is similar to Fig. 4. 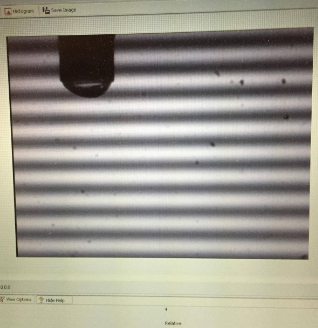 Fig 5. From this question

I'll be grateful if any explanations use diagrams.

Update: I've obtained several fig3 conditions, and though they are less frequent, they're not very rare. 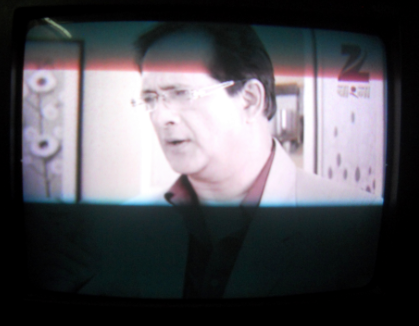 File properties show exposure time for this still-photo is 1/125 second.

I've also took some videos (in PAL and NTSC mode... both gave same result), file properties show frame rate is 30 frame/sec; and run them on slowest motion. I found similar, but much brighter and quite unclear bandings, and it seemed from slow-motion video that the alternating bright and dark band rising on the upward direction. From that videos I screenshoot some frames as-successive-as-possible.

. Red small bars added to indicate the margin of each banding

Yes, you're basically on the right track. The bands appear because the camera shutter is not synchronized to the vertical scanning of the CRT.

A fast shutter speed will only capture part of a scan. A shutter speed exactly equal to the vertical scan period will capture a full scan, but there still might be a narrow band (either dark or light) somewhere in the image if there's any mismatch in the timing.

To minimize the banding, use a shutter speed that spans several vertical scans, but this only works if the image on the CRT is static.

The only reason you didn't see "Fig 3" (bright stripe in the middle) is that your shutter speed is too slow. You have a much higher chance of capturing a dark gap in the middle, because those pictures all include a vertical blanking interval (the time when the beam is offscreen and "moving" back to the top) as well as all of the vertical part of the picture hidden by overscan. You can see from Fig 1b that your shutter time captures all but 1/3rd of the visible part of one field. To get "Fig 3" would require pretty precise timing, and your bright stripe would be nearly the full height of the display.

Your scanning beam description seems right on, to me. But my experience would be with a film camera, not digital. Your more complex images make me think of scan-on-scan of reading out the digital pixels vs cathode ray trace, presuming the readout speed might be similar to the scan rate on the CRT.

In film with a planar shutter, the choice of shutter speed could result in skew for the CRT image against the film. My first SLR had a left to right shutter. My better one did top to bottom. If you had an iris shutter, the results would not show such skewing because it opened from center out and back. The standing rule for taking a photo of a TV screen was to set the speed to 1/30 or lower to get the full interlaced image.

Not as a confirmed-answer, but hypothetical one,

the other-2 situations could be this:

2 . when Camera having speed synchronous with TV

Whether the camera (i)starts scanning with the TV, or (ii)start scanning out-of-phase (above picture); in both-cases we should get the accurate picture... neither dark band nor bright band.

3. when camera is slower than TV

conditions like fig 1 a, b or c , but with an extra shade of brightness could be obtained. So we could get a medium-bright band and a very-bright band (no dark-black band)

Fig7 a (leftmost) indicates ultimate photograph that should be obtained .

(gradients would take place if I consider the camera can detect the gradual loss of phosphorescence.)

3
Why there is 625 lines [ PAL ] in T.V. scanning or odd lines?
2
are there 2 basic-type of CRT deflection-yoke coil?
19
Why are color difference signals transmitted rather than R,G,B signals?