In the circuit below, the INPUT would be driven by the same +5vdc used at the collector. The resistor would be a low value (110-180ohm). Forward voltage drop of the LED 2.8v. No resistor on the NPN base. Seems in doing this the voltage at the collector of the NPN would be 5v-2.8v = 2.2v due to voltage dropped across the LED. So the collector voltage would be less than the base voltage? 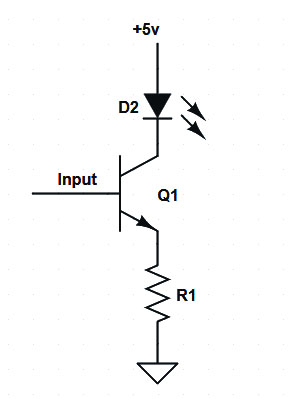 I have a project that involves modification of an existing circuit board. The led is fixed on the collector side. The original circuit had the NPN in an emitter-follower setup -- with a driver/decoder directly driving the base of the NPN (ie. no resistor). I am trying to preserver the emitter-follower setup to avoid having to hack the board to add a resistor on the base (if I changed to a common emitter configuration). With making modifications as in the drawing, the circuit works on the modified PCB. The LED lights fine. Yet when I simulate on a breadboard I'm unable to light an led by driving the base directly with +5v. I have to add a 10k resistor on the INPUT at the breadboard to light the LED. Just trying to understand why this is and whether what is WORKING (for the modified PCB) is a reliable-enough circuit or a fluke?

I asked if you could provide an existing schematic for your pre-existing board that you are adapting in some way, I guess. It would really help to see what you already have, in order to better understand why you want to avoid adding a base resistor and to better understand how to offer an effective answer to you. You've provided a schematic, but your writing about it makes me feel it is more prospective, than real, and an attempt by you to understand how that one might work so that you might better figure out a way to do what you want to do. But this leaves the rest of us in a bit of a lurch. We aren't there, don't fully understand what you are struggling with, and so I'm left just trying to help you understand what you show there rather than actively seek a better answer a situation I don't fully apprehend yet. So let me focus on what I can see there and what I think you said about things.

You write that the pre-existing circuit uses an emitter follower. And I think your schematic here is meant as a rough representation of sorts. You write that it works on the board, but that when you breadboard things it doesn't work unless you add a base resistor. This already suggests to me that there is a missing understanding leading to you not being able to provide all the necessary information here to get things down correctly. There's an information gap, in short.

The schematic you provide is perfectly good, under the right circumstances. If the base voltage supplied by the driver pin is taken as 'sufficiently' low impedance (let's say something less than 200\$\Omega\$ just to pick a number to be below), then the base will be magically held at that driver output voltage. Let's call this \$V_b\$ and assume it is solid. Assuming the design is correct and the BJT is in its active region and not saturated, then the emitter will be predictably at \$V_b - 0.7V\$, as a first approximation (I guess that \$V_{be} \approx 0.7V\$ at \$I_c = 4mA\$ and will go up 60mV for every upward decade change in \$I_c\$ or down 60mV for a similar downward decade change.) Since the emitter is now predictable, so also is the emitter current because \$R_1\$ in your schematic will have a known voltage across it. This emitter current will mostly become a collector current, so the effect here is that \$R_1\$ sets the LED current. Assuming, of course, that the BJT's collector can indeed drop low enough under the conditions to achieve it in the LED.

So this just means that the BJT is acting as a settable current sink, where \$R_1\$ sets the current. This current will be true regardless of the voltage drop across the LED... so long as there is sufficient headroom and so long as the base driver can continue to supply the needed base current (which will grow quite high if the BJT has to go well into saturation.) If \$V_{ce} \ge 1V\$ then the BJT doesn't go into saturation and the full \$\beta\$ applies, so the base current that loads your driver that drives the base stays very low, too. (That can be a side-advantage of this circuit, since the BJT doesn't operate as a saturated switch requiring a large base current to achieve it. But the main purpose is as a settable current sink, which a saturated BJT wouldn't give anyway.)

Have you measured any of the voltages in your existing circuit? Just curious. From the aforementioned, you should be able to do a lot of your own calculations. Measure the base voltage when the board is operating. See if you can find an LED that stays on and doesn't flicker, if you are using a standard voltmeter that can't capture maximum or minimum voltages fast. Or use a scope, if possible. But it would help a lot if you could identify what is going on with a circuit you say "works" and then compare that to a breadboard circuit you say doesn't work the same.

EDIT: Regarding your pre-existing driver situation. It's likely that there are two different kinds of external driver components acting on either side of your LEDs in the matrix. (External to your driver IC.) Which is which depends on how they arranged it. But the two would be a column or row driver that acts as an ON/OFF switch and does NOT control currents, and an opposing row or column driver (if the first is a 'column' then this is a 'row' and visa versa) that acts as a settable current source or sink. The circuit you show is the latter and acts as a settable current sink. There will likely be a different kind of circuit for the other side, which instead acts as an ON/OFF switch to some voltage rail (if the circuit you gave is representative of the sink side.) It's possible that the driver IC includes the high side switch, though, and there's not much external to it there. Don't know off-hand which is the case since we don't have any idea what exactly you are working on.

Seems in doing this the voltage at the collector of the NPN would be 5v-2.8v = 2.2v due to voltage dropped across the LED.

What will happen in this circuit is the collector would not drop below the base voltage. Therefore the voltage across the LED is 0 V and no current flows through the LED and into the BJT collector.

Therefore the base-emitter junction of the BJT acts as a diode and current to supply R1 will be supplied through the base, not the collector. Q1's emitter will be at about 4.3 V. This means about 24 mA flowing through R1, assuming you used 180 ohms.

Since there is no current flowing through the LED, the LED does not light up.

If the base is driven to 5V then most likely the transistor will go into saturation.

In saturation the difference between the collector and emitter can approach 0V. So you can have the collector around 0.7V less than the base voltage.

The saturation condition is caused because the LED probably will not conduct much current below 2.8V, and therefore the collector will be starved for current.

0
LED on the collector without a base limiting resistor