How is inductive wireless charging of a moving vehicle on a public road possible in efficient way?

Looks like one of the major problems of wireless energy transfer is efficiency. For example, Magne Charge high power charging system seems to have about 86% efficiency which means that quite a lot of energy is lost when passing several kilowatts of power.

Yet seems like Bombardier PRIMOVE technology is efficient enough for powering and in-road charging a moving bus or even a moving tramcar in a wireless manner - a ton of wires is installed under the road or the driveway and those wires are controlled by some clever service electronics to be energized when a vehicle is passing over them and act like a primary coil of a wireless energy transfer system. The vehicle is equipped with the secondary coil.

Each time I inquire about wireless energy transfer seems like the distance between the coils is one of the critical factor. In the above scenario there will be some clearance under the vehicle and also the wires will be installed into the road and so will be covered with asphalt or concrete, so the distance can't be less that say 0,2 meters. Also the vehicle is moving which means that its secondary coil won't be perfectly aligned with the wiring in the road.

How is efficient energy transfer possible is such setup?

Well if you would know the answer you could make a lot of money selling this technology. I think that there will always be a large loss. But there will be savings on the car side. The battery doesn't need to be as large as normally as it can be charged continuously. This is also better for batteries, better lots of small charges than emptying it completely.

The 4 tires is the parts closest to the road surface. The pickup zone of transfer can be near 100% efficient if the space inside the tires can be involved.

Embed 2 long wires in direction of road. They should match width of vehicles. Embed single turn shorted coil into each tire. Mount pickup coils anywhere around tire on the vehicle keeping the axes in parallel to wheels axes. The magnetic cores for pickup will be C-shaped "biting" into the wheel's "shorted coil".

The scheme is similar to rotating transformer. It was used in video tape recorders. Red is core. Black is copper. There can be more to it. Like C-shaped magnetic inlay around copper ring. Even embedded schematics into wheel, instead of single ring, etc. Red is core material. Black is copper. Note that there are NO electrical contacts, only gaps everywhere. 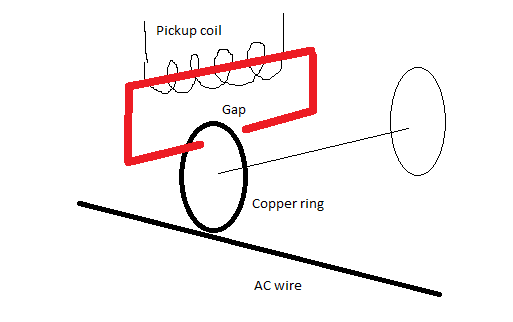 (I haven't seen any good references for the efficiency of the Magne Charge system. Too many people seem to be quoting the Wikipedia article, which has a big "citation needed" flag. In particular, I wonder what the overall loss is, as well as the losses in the frequency conversion cabinet, and the loss in the paddle-to-car transfer).

I imagine that if I were involved with Primove, I would use magnetic resonance to improve efficiency. Something like Witricity used to charge a parked car with a transmitter on the parking lot surface and the receiver attached to the underside of the car at 90% efficiency. That's the same 90% efficiency that some people quote for the Magne Charge system.

Magnetic resonance systems seem to be more tolerant of misalignments than other inductive systems.

From my research using resonance to link the transfer field is far less fussy about distance or accuracy. Putting infrastructure into roads like Bombardier suggest is crazy and untenable.

This is my 1st answer(!), information taken from a link in another thread provided by AndyAKA (I think?) http://www.travisdeyle.com/publications/pdf/2008_icra_power_surface.pdf

The research here has overcome this problem by introducing a tertiary dissonant coil as the harvest coil. So the primary coil's sole purpose is to resonate with the (now static) secondary transmitter coil providing the added 50% efficiency mentioned earlier. The secondary coil is constructed beneath the perimeter a surface (the road) in a rectangle shape, a second rectangle half the size (its corner in the center of the larger rectangle, the opposite corner aligned) and a third rectangle, again, half the size in the same alignment (scroll down the link for a pic.)

The wireless induction through the tertiary coils, in this instance, is the sole source of power for the robots upon which they are attached. I believe that this idea could be implemented at road intersections, on highways and highway slip roads to provide sufficient charge (to a capacitor -> battery conjunction) to reach the next intersection, off ramp or highway charge point. I also believe that the power for non essential vehicle systems (ie. entertainment systems and air con) should be provided by a different (charge at home) circuit thus minimizing the effect these systems have on the range of the vehicle and maximizing their operational time.

Anyway, just my 2 (completely worthless) South African cents on a very old thread with a link to even older information!

Inductive wireless charging works fine for stationery objects but for moving objects you need to have an array of primary coils beneath the road.

To understand the setup, imagine an array of coils (transmitter) wound over a flat plate (in XY plane) of a suitable core (width, length>>thickness). The coils are wound such that the net flux inside the core in zero. The secondary coil (receiver) is flat and in a plane parallel and above the plane of transmitter (the axis of the receiver coil is perpendicular to axis of coil array).

Now, the coil array is controlled by a computer which locates the receiver and accordingly regulates the flux through it by sending the current in the required coils of the array (keeping the flux inside core zero).

PS-felt too lazy to add an image :)

Not the answer you're looking for? Browse other questions tagged power-supply power wireless transformer inductive or ask your own question.

8
Why does short distance wireless energy transfer have such low efficiency?
2
Can 5okW be transferred using resonant wireless power transfer?
2
What's the need for higher frequency in inductive charging systems?

7
How does a wireless charger work without a magnetic core passing through both “coils”?
8
Why does short distance wireless energy transfer have such low efficiency?
2
What's the need for higher frequency in inductive charging systems?
4
Is there any difference between “induction” and “resonant” wireless energy transfer?
5
Is it technically possible to divert a lightning into a moving vehicle as in “Back to the Future” movie?
5
Is it possible to have a device with metal case and wireless charging?
2
How efficient is wireless electricity compared to wired electricity?
6
How big does my wireless charging coil need to be?
0
Wireless power transfer choosing of mosfets