How does a photodiode behave in saturation?

In my design, a photo diode is connected in reverse bias with 12V. The LDO (low-dropout) voltage regulator which is used for biasing can deliver a maximum current of 500mA 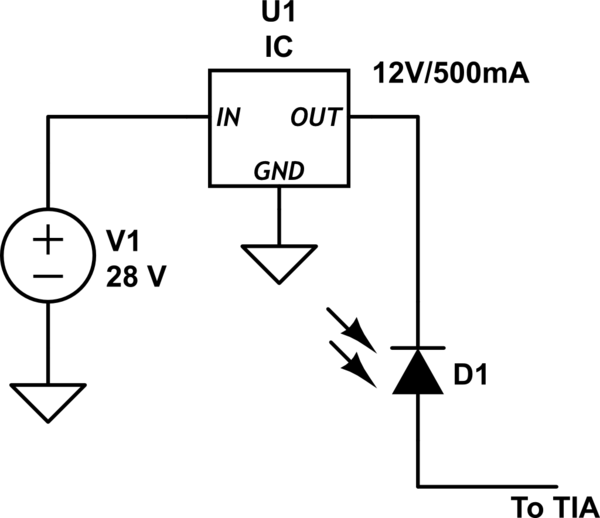 What I want to know is: If my photo diode gets saturated, how would it behave? Will it behave like a current source generating maximum rated current? or a short circuit allowing 500mA of supply current directly to the TIA (transimpedance amplifier)?

I'm asking because I want to put a protection diode before the TIA, which has maximum rated input current of 100mA.

I want to know the equivalent circuit of a saturated photo diode - is it a closed switch or a regulated current source?

OP: "...please explain how would a photo diode behave in saturation which would explain my doubt in total, is it like a close switch or a constant current source with current being peak current"

PS: Seems that the question is too old. I have no idea why it appeared in recent questions. Maybe a Community edit...

Are you sure this is really an issue? Even a large-area PD might require something like 1W of light power on the chip to get to hundred of mA of photocurrent. Dissipation at the sensor might be more of an issue if it's sustained.

Also, if you exceed the 100mA current, the TIA should simply saturate at the maximum output voltage meaning the input will go above ground, which should not damage anything. The PD can't supply current without bound on the output (compliance) voltage- it is limited to the voltage on the regulator so the worst it could do is effectively connect the TIA input to the +5.

Not the answer you're looking for? Browse other questions tagged photodiode saturation or ask your own question.