blink a led 10ms every 1 second

I am currently looking at generating a signal to blink a led with a 10ms duration every 2 seconds. I was thinking to use a 555 timer to do so, but I don't see how to change the duty cycle to make that off time is different than on time.

I want to avoid the use of an MCU if possible to save energy.

So this is also from \$2V\$ to \$3V\$. Is this another question related to your MSP430 question, earlier, called "connect a 5mm led to a gpio without transistor"? Is this just another way of addressing your earlier question? If so, you really are better off just getting a high efficiency low current LED and doing this in software. You'll get precision control of timing and it's cheap and easy. Plus, using the existing MSP430 for this (which has fabulous sleep modes and very very fast re-start from sleep capability) then the power consumption is really at a minimum, too. In fact, even if you had to add another MSP430 for ONLY this purpose, it would still be a very very low energy alternative. Those things sleep on sub-microamp draw with a timer running and can fire up to full speed in about a microsecond. I can't see why it wouldn't be a solution here.

Honestly, I don't know why you don't stay with that solution. But I'm going to assume this is for a different purpose than that one.

If you are serious about a completely separate circuit for blinking the LED and truly don't want to use the LM3909 for other reasons, then here is a workable LM3909 in discrete form: 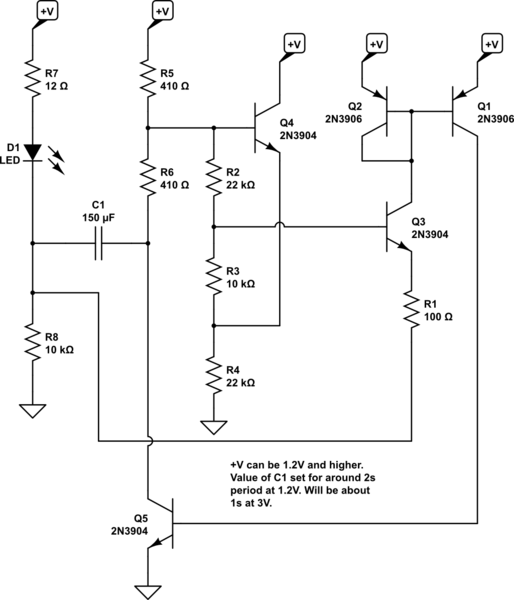 Again, the current consumption of a dedicated MSP430 is less.

You could also consider this circuit: 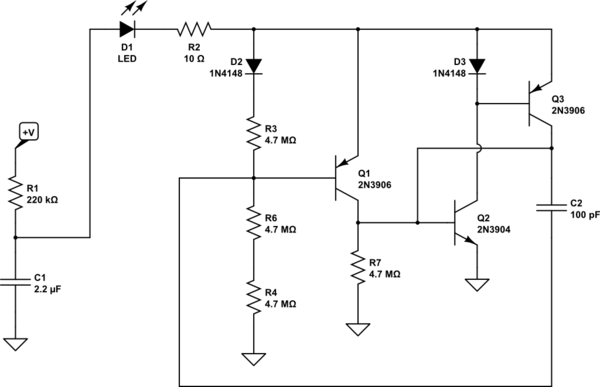 It's also extremely low power. It will not work at \$2V\$, though. I think you may be able to operate down to somewhere around \$2.5V\$, perhaps? Definitely at \$3V\$. So it may not be a fit. It was something I was considering attaching to the phone line to monitor the activity, as it converts voltage to frequency pretty well and with different values for \$R_1\$ and \$C_1\$ wouldn't exceed the phone company's maximum on-hook impedance for a phone attachment.

But you really do need to specify a LOT more than you do when you write. In general, you aren't disclosing yourself very well nor discussing a range of acceptable behaviors or constraints.

To adjust the duty cycle you create alternate charge and discharge paths for the timing capacitor using diodes. This example uses a potentiometer to adjust. You can leave it and R3 out if you calculate the required values.

As @DanielTork suggests you can do the same thing by adjusting the charge (R1) and discharge (R2) resistors. 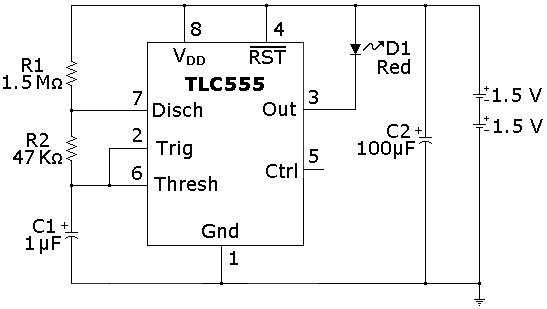 Figure 2. A CMOS 555 will consume much less power. Source: All About Circuits.

I want to avoid the use of mcu if possible to save energy?

If you want to save energy think about choosing a non-555 solution. Off the top of my head, there are very low power op-amps such as the OPA333 (TI) that consume about 20 uA. With appropriate high value resistors and capacitors you could fabricate an asymmetrical duty cycle schmitt trigger relaxation oscillator: - 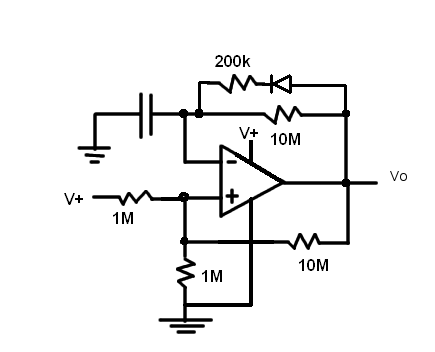 High value resistors MUST be used to avoid too much energy loss and I'm thinking that a basic feedback resistor to the cap would be 10 Mohms with a diode and 200k series resistor across it to give a duty cycle of 200:1.

Op-amp input leakage currents are sub nano amps so 10 Mohms should not be a problem. On the positive feedback side a 10 M resistor should also be used with a couple of 1 Mohm resistors as shown although you might get away with 4M7 resistors.

Not the answer you're looking for? Browse other questions tagged led timer 555 or ask your own question.

0
Connect a 5mm led to a GPIO without transistor?