My question is, am I doing something wrong? Are the transistors that I used not capable of performing this job? What should I do for the LED to be lit on maximum and control its brightness via the value of the PWM of the Arduino?

The PWM voltage of the Arduino is 5v.

Feedback to your answers: I have ordered each sensor that each one suggested and I will try out your solutions. Once I am done, I will let you know about the results.

You are using PNP transistors in a situation where NPN would be much more suitable.

For that matter I would personally choose an N-channel MOSFET instead of BJT. 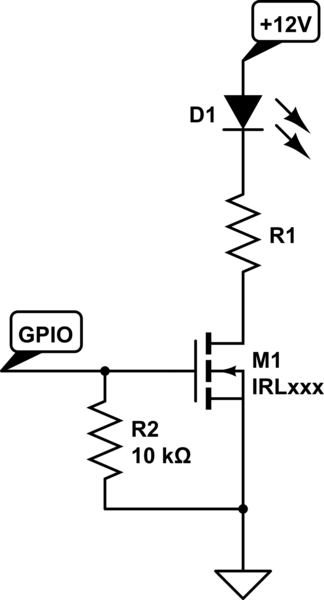 R1 needs sizing for the current flow for your LED. R2 is used to keep the MOSFET turned off while the Arduino isn't actively driving the IO (it starts in INPUT mode while the bootloader runs for 2 seconds).

Make sure you choose a MOSFET that can a) handle the current you need, and b) is a logic level MOSFET with a \$V_{GS}\$ of no more than a couple of volts.

I was tempted to just add additional notes, now that you've later specified that you need \$I_{pk}=1A\$ for your LED. But it seems better to just revise everything on the basis of the new information and ditch the extraneous bits and questions I'd asked earlier and just get to the point.

(Your use of a PNP, especially because you are coming from a 0-5V I/O pin and connecting the PNP BJT directly to +12, is fraught with issues some of which I guess you encountered.)

So, let's re-state the requirements, discuss my worries a little, and lay out a schematic to follow for your PWM circuit.

First off, I'm going to assume that you do not need any current-limiting. If you supply a voltage source that is capable of delivering nearly \$12V\$ to the LED, then it should just work right. No need of a circuit to help it, then.

Second, I'm going to assume that you have a \$12V\$ power supply rail that is rated for your use. If you say you need \$1A\$, I'll assume your power supply can handle that without difficulties and still achieve the rated \$12V\$ output voltage.

Third, I'm going to assume that \$1A\$ is your maximum current required and that you expect to dim things down from there using PWM. Not that you need some other peak current, where say \$50\%\$ duty cycle is the equivalent of \$1A\$ brightness.

Fourth, just to be very safe about it and to allow room for other I/O pins to also deliver current where needed, I'm going to assume that you only should expect a maximum sink/source of \$3mA\$ from your output pin. Keep in mind that your micro has lots of I/O pins and that some of these I/O structures are close together on the die. If you start using lots of I/O for different things and make larger assumptions based on the idea that the specifications tell you the max that one I/O can handle, then you could get into trouble just the same because you didn't take limitations of the entire cpu, or specific ports of the cpu, into account. (Less is better, of course. And I'm pretty sure it can handle about three times that.) So I'm going to stick hard to that number. You can make other choices.

BJTs that are rated to handle \$1A\$ are usually found in TO-220 or TO-3 packaging. However, even the lowly 2N2222A is rated at a continuous \$600mA\$ (in unusual circumstances and lower \$\beta\$ because of current crowding, anyway.) But in general, this is just enough over the wire that you should not waste a lot of time looking for some small signal packaging. This applies to MOSFETs, too. So let's take it as a given that you will use either a TO-220 or TO-3 package for your driver transistor. Once you have made that decision, the cost difference between BJT and MOSFET starts to disappear. So either choice is probably a good one. In my case, I'm going to stay with a BJT. Others will offer some good MOSFET choices. To each their own.

Let's get to the schematic: 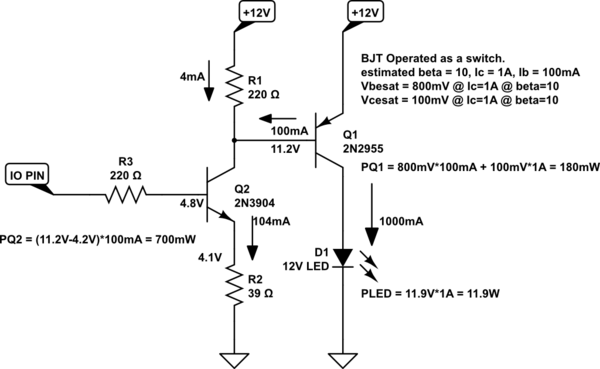 I actually used datasheets to make sure I was providing a situation that would work, regardless of reasonable variations in parts. The required current loading on your I/O pin will likely be \$500\mu A\$, but should in almost all cases be less than \$1mA\$. This is even better than I'd hoped, earlier.

One concern is about speed. But it should work even if you fed it a \$100kHz\$ square wave at \$50\%\$ duty cycle. So I think it will be okay. You could remove \$R_3\$, since the I/O probably already has about \$100\Omega\$ output impedance to it. \$R_3\$ is mostly there about oscillation worries, where I'm not all that worried. But adding one right away makes it easier to change.

I've added some power calculations there. I'm mostly worried here about \$Q_2\$, which looks like about \$700mW\$ when turned on and active. That's fine if you can get a BJT for that position which can dissipate that much into the air. However, you could distribute most of that wattage into a resistor, instead. The new schematic would look like: 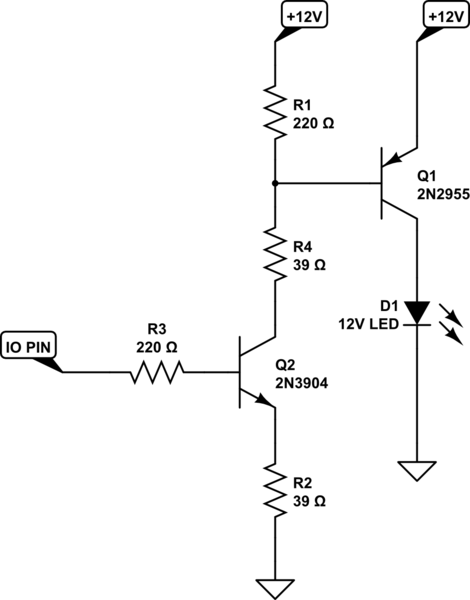 The purpose for \$R_4\$ is to pick up some of the needed voltage drop so that the collector of \$Q_2\$ doesn't have to reach up so high. This transfers dissipation from \$Q_2\$ to \$R_4\$. It doesn't really matter where the voltage drop takes place, so this is a harmless way to move dissipation away from the BJT. It otherwise doesn't really affect the circuit's function.

Now for some news. The following is my own writing, but drawn from some experiences.

This Talbot-Plateau law reflects on your PWM frequency choice. Make it fast enough to eliminate the appearance of flicker.

The reason it doesn't look "half as bright" when operating at a 50% duty cycle is that the human eye works according to another law, the Weber-Fechner law. That one states that intensity goes as the logarithm of the physical stimuli.

Well, almost. There's a pair of other ones, the Broca-Sulzer effect and the Bruecke-Bartley effect, that operate at flicker frequencies below the CFF. At around 50ms on-duration and 50ms off-duration, for example, a blinking light source will appear to be brighter than the time-averaged luminance ... in apparent violation of the Talbot-Plateau law. But the Talbot-Plateau law doesn't apply at such low frequencies, so it isn't really a violation.

Actually, there are a lot of "laws" in the field of visual optics and optometry. These are just three or so out of many more.

Varying the LED intensity smoothly as the human eye perceives it isn't as simple as linearly varying the PWM duty cycle. Our eyes have a roughly logarithmic response (Weber-Fechner law, already mentioned.) This is a biological necessity. We need to use our eyes in broad daylight, at high noon, on the equator. And we still need to use them on a dark, moonless night. To cope with all this, our eyes have evolved responses that vary in more of a logarithmic fashion. (As the Weber-Fechner law states.)

When we ask ourselves to "adjust the brightness, linearly" this should roughly (1st order estimate) mean we need to vary the current in an LED exponentially. (Our eyes will take the logarithm of that and that will flatten the resulting 'curve.') This means we need to take a different approach than just trying to vary the current (or PWM duty cycle) in a linear way, or else just give up on that idea and do what "comes easy."

This means that the duty cycle in a PWM needs be adjusted on a percent by percent basis (geometrically, in effect) in order to approxiate an exponential. That way, our eyes will perceive a linear change in the LED output.

Bottom line? If all you do is linearly adjust the PWM duty cycle by fixed increments, then you won't really get something that looks smooth to the eye.

Just thought I'd toss that in to complicate your life.

(And then I'm going to discuss something that may push your understanding a bit more and hasn't been covered here, either.)

You are using the PNP transistor as an emitter follower. In this arrangement, with 5 volts from the Arduino, the transistor's emitter cannot be more than about 4.3 volts.

You should use an NPN transistor such as 2N3904, with the emitter grounded, a 1K or so resistor between Arduino and base, and the LED and current limiting resistor between the collector and your positive supply.

if your 12V led is sufficiently bright from a little under 12V and sufficiently dark with a little over 6V you can use a pnp emitter follower to drive it like this, but note a 5V in will make the LED dark, and 0V in will make it light. if the above is true LED current is less than 20mA you can connect it directly to the arduino (not using the transistor) 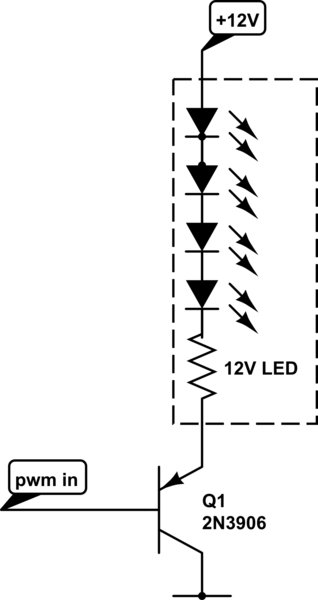 Not the answer you're looking for? Browse other questions tagged arduino led transistors brightness or ask your own question.

0
How to drop the external source output voltage using Arduino

0
Using a PNP transistor with Arduino to close a circuit
12
Switching 9V using a NPN transistor and an Arduino
1
Arduino, NPN and common cathode RGBs
0
Transistor with different voltage in colector and base
2
Modifications to 555 LED Fade Circuit
0
How to drive a 10 Watt LED from an Arduino?
2
NPN Transistor To Control LED Strip
5
Simple LED fade circuit
0
Using arduino and transistor for motor control
0
Transistor as a heater device and measured by LM35 temperature sensor?