How can this layout be improved? (Gigabit Ethernet with discrete magnetics and POE)

No there is nothing majorly wrong with the layout, it turns out that the ethernet transformer was out of spec by 0.2dB on Insertion loss, when paired with the PHY IC we are using.

Is there anything noticeably wrong with the PCB routing of the gigabit ethernet?

Gigabit Ethernet has many design constraints, due to the layout of components on the PCB it is at times impossible to follow all the design rules. This design is required to perform Gigabit speeds, and feed a POE supply.

It must also pass FCC EMC/EMI and ESD testing.

I have read through almost all application notes available (TI, Intel..etc). I have, to the best of my knowledge, followed them as best I can. Traces are routed as diff pairs, and with the best possible spacing to prevent cross talk. Minimum use of vias/stubs of 2 per a segment. They are symmetrical as possible, and post magnetics each pair is matched to within 1.25mm, pre magnetics they are matched to within 2mm. Traces are routed on the bottom layer to avoid crossing multiple power planes as a reference.

However this design presents some challenges which I am too inexperienced to assess. Ie When do you choose to violate design rules, and to what extent can you get away with it.

Are there and obvious shortcomings of this layout that I am missing? 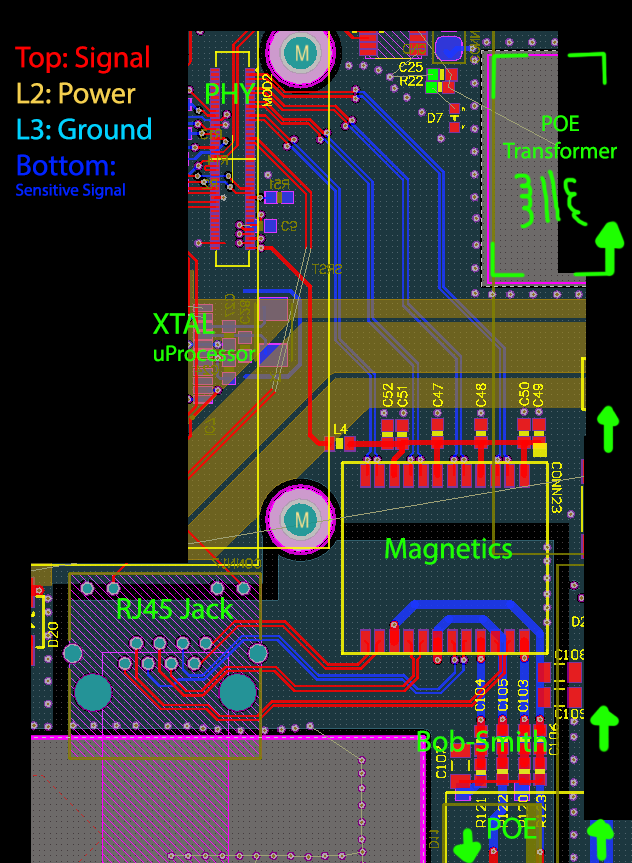 Things that spring to mind:

I advocate single layer routing for any high speed signals.

You could, alternatively, make the area on layer 2 ground where the vias and ethernet tracks exist on layer one, but you would still need stitching vias for the reference layer to change from layer 3 to layer 2.

I have taken your image to show where they would go: 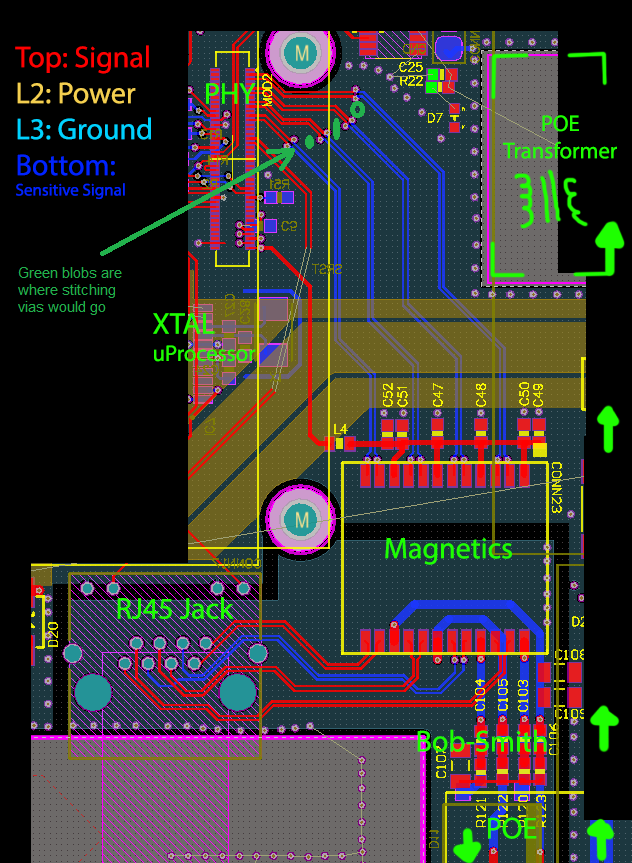 That won't change the fact you will have some discontinuity, but it will keep it to a minimum. The stitching vias provide a short path between the reference layers; if they are not there, the return path will need to find the nearest point at which the return current meets - the further away that is (up to a certain limit), the larger the discontinuity.

In general, I try not not to put anything under the magnetics, but as your tracks are apparently shielded by the ground layer, I do not see a major issue with those.

Not the answer you're looking for? Browse other questions tagged pcb-design ethernet layout magnetics routing or ask your own question.

47
Why are vias placed this way on a PCB?
3
How does Stitching capacitor provide shortest return current path between plane splits, as we know that it blocks DC current?