I'm trying to convert my lantern torchlight into a LED one, using a COB 10 Watts LED. The LED look something like this, although won't be the exact one. 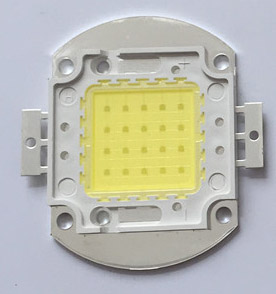 Is this heatsink suitable for a 10W LED? I found it in my storeroom, most probably scrapped it from my old CPU..

It's 9CM in diameter and around 1.5CM thick. If this can be used, can it be used without a cooling fan? Since the battery will be running on batteries, I'm trying to save as much power as possible.

And do you guys have any suggestions on how to mount the LED onto the heatsink? I'm thinking of drilling two holes then mount it on using bolts and nuts. It'll be great if I can just use thermal glue to glue it on, but I'm not sure whether it'll hold.. 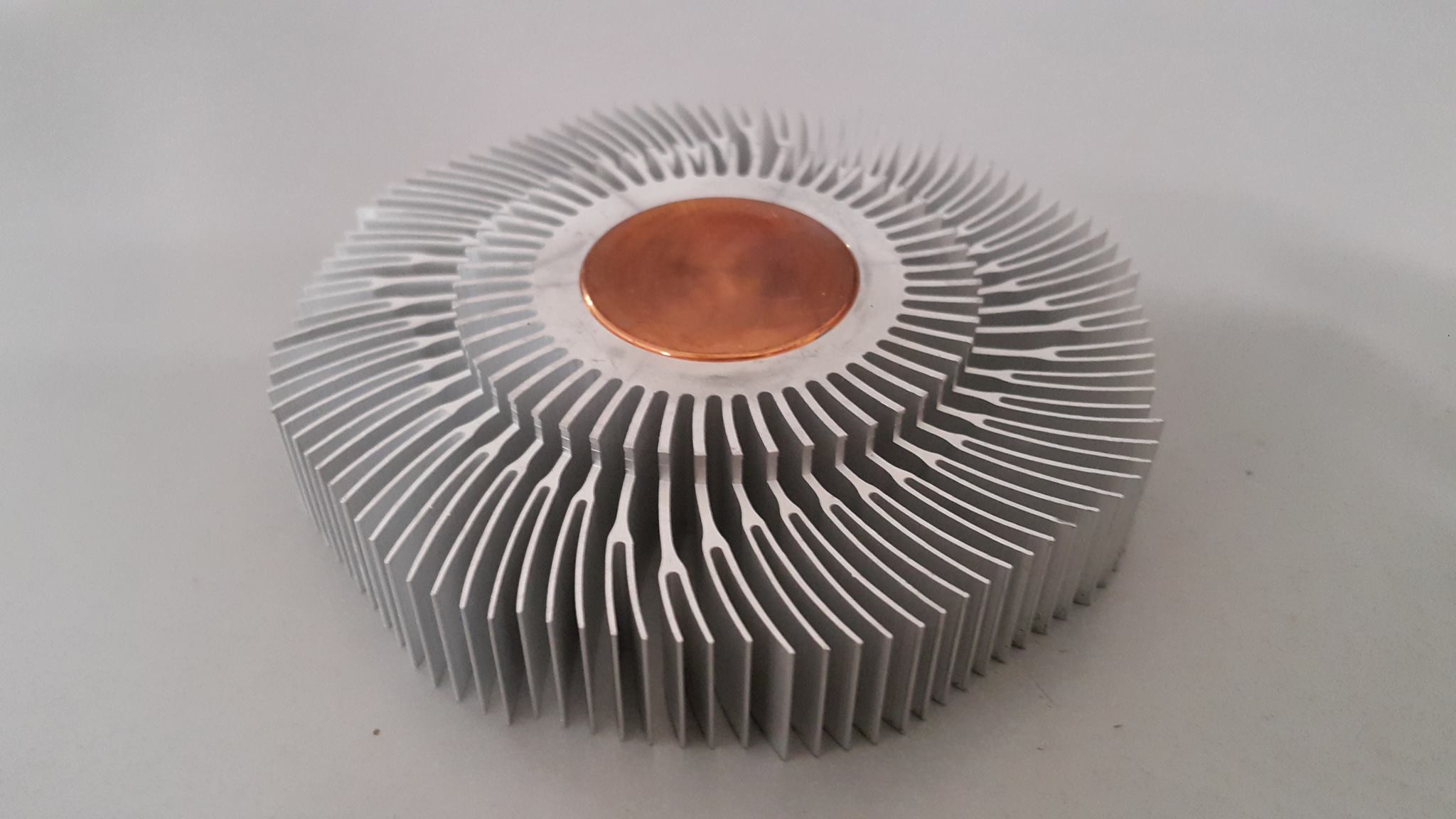 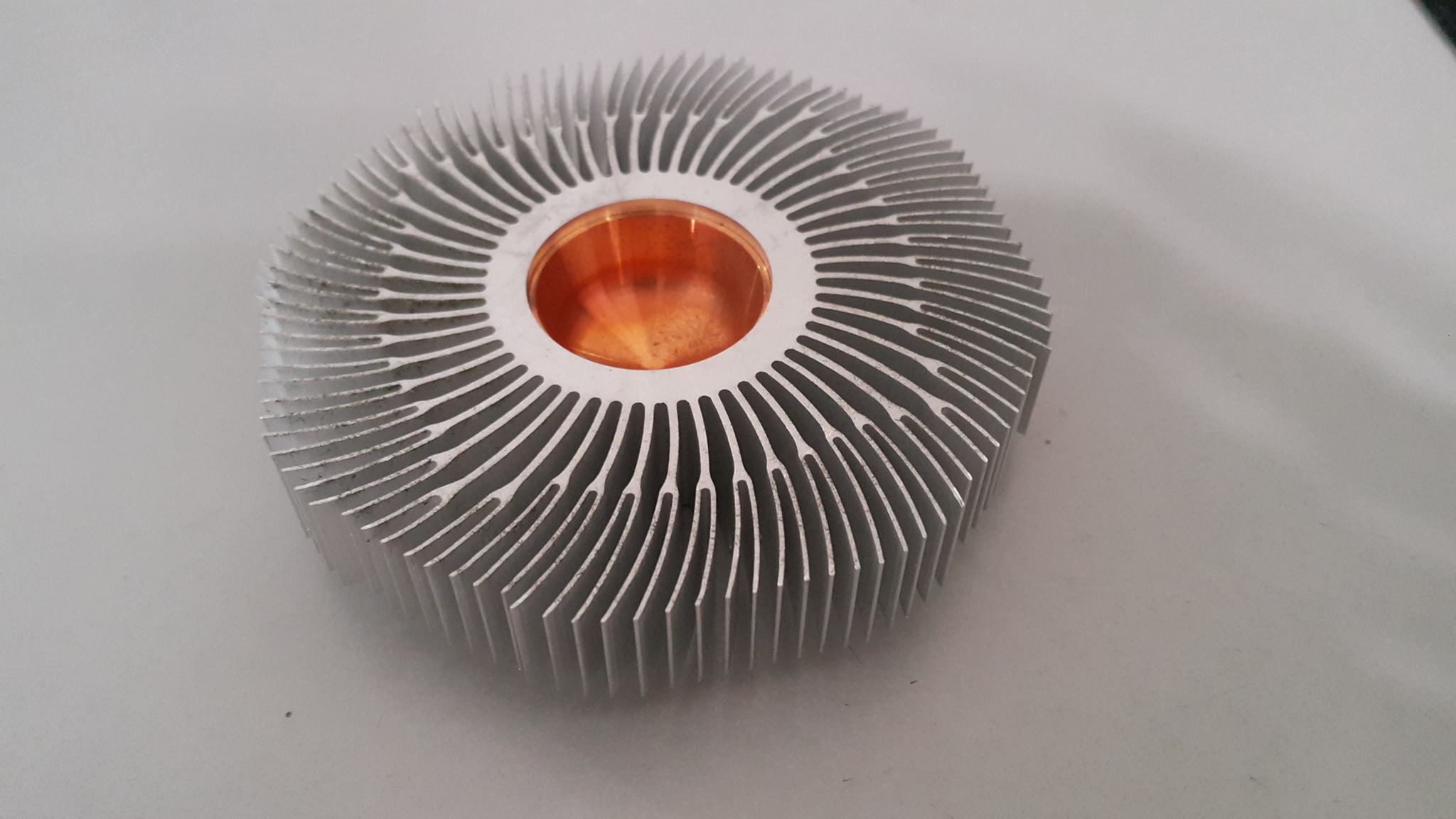 Most desktop CPUs have thermal design powers >> 10W, so technically, you should be fine.

I don't have any experience with this particular LED package, but it looks like it was designed to be screwed or spring-held against a flat metal surface - which is exactly what your cooler seems to have.

So, make sure that the backside isn't part of opposing contacts, so that connecting it with conductive surface would shorten them.

Add a bit of thermal grease and just gently (yet firmly) push the LED onto that surface. Slow down with the holes, do a test run over a couple of minutes first. I found that it's usually sufficient to use bent wire in a way that is "springy" and presses the LED to the flat surface evenly.

Then can I just use that, without a fan?

That entirely depends on the environment in which the heat sink is used.

A fan isn't used to cool, per se; it is used to remove the heat that is in the heat sink to some other location. If the heat sink is in a thermally insulated environment then there is nowhere for the heat to go. No matter how big the heatsink is, given time the heat will build up to a level where the LED will fail (or the lamp will melt).

So you need some way of ensuring that the heat sink is kept fed with air that is at a lower temperature than the heat sink. That may happen passively if the hot air inside the case has a way of transferring its heat to the outside world, such as through the body of the lamp (a thermally conductive case is good for this [metal]) where the body forms part of the heatsink, or through passive air flow through ventilation slots in the case.

One thing to remember is that "hot air rises". If the lamp is in a static orientation adding ventilation both above and below the heatsink will create a natural convection through the lamp driven by the heat from the heatsink drawing a constant supply of cooler air over the heatsink.

If you can't provide air passively then a fan will be needed. Just placing the fan on the heatsink in a sealed environment though will have little effect. The fan would be better suited being used to supply the interior with cooler air (or remove the hot air causing cooler air to be drawn in through the pressure difference).

Not the answer you're looking for? Browse other questions tagged led heatsink or ask your own question.