I am not sure this is the right place to ask this question, but did not see any communities dedicated to Atmel chips.

I used a scope to look at my atmega328 clock signal (pin 14) and got the following result. 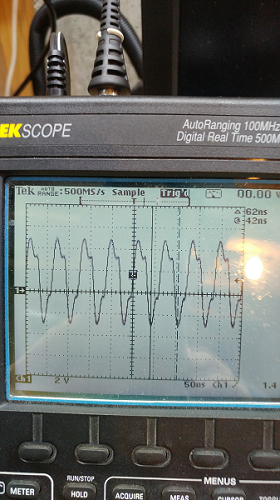 I expected a square wave, not a notched sine wave, but I have no basis for that expectation. So, is this what the signal should look like, or do I have some problems with my clock setup (noise, wrong caps, etc). I am using a 16MHz crystal with 22pF caps to ground wired to XTAL1/2 (9 and 10). The clock frequency looks dead-on at 16MHz, 62.3ns which you can see on the scope. Supply voltage is coming from a 7805 (fed from a 12V wall wart) Does this indicate a noise problem (need additional capacitors perhaps) or maybe this is actually what the signal looks like?

Second question this made me think of, what generates the clock signal anyway? (If I need to ask that as a separate question I will).

The probe is a 10x probe, 100 MHz. It was not calibrated when I measured the above signal, so I calibrated it per Stratton's instruction. The probe is now compensated as can be seen here (820 microsec period = approx. 1.22kHz which is what it should be) 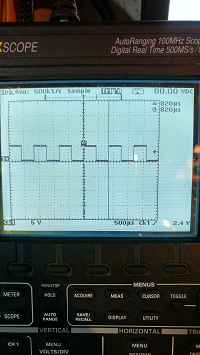 Now when I hook everything up, I get the following, it looks worse... 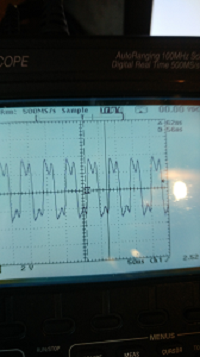 Could the notching be strictly from no bypass capacitor at the chip? I find that hard to believe, but I have never done this experiment, so I am out of my league!! I know every thing I have read and learned says to use them, it would just be amazing.

Also, I included a picture of the setup just for clarification. Maybe you can see something you don't like (besides my poor ability to build a test board!!) 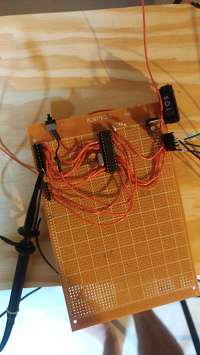 The first shot looks like ringing caused by stray inductance of the ground clip on the probe and/or compensation issues. 16MHz is getting in to the realm where stray L-C becomes an issue in measurement.

From your shot after you compensated the probe, it now starts to look like a bandwidth limited square wave. You can clearly see the first (16MHz) and third (48MHz) harmonics, however the fifth (80MHz) and higher are gone. Having said that, the third looks distorted (more like a second harmonic, which shouldn't be that strong)

This makes sense. Your scope bandwidth is too low to get anything higher than the third harmonic, so it will always look distorted in that way. As for the lack of the fifth harmonic, well you either have bandwidth limiting enabled on the scope, or the bandwidth of the probe is not high enough. Either way it is getting filtered out.

There will also be ringing still from the ground clip inductance which will cause some distortion and may explain the extra distortion beyond bandwidth limiting.

Ground clips cause ringing, it's inevitable. However, you can eliminate some of the issue by removing the ground clip all together and use the alternate ground on the probe.

Usually scope probes have a removable spring tip. Once that is removed, you have the tip of the probe (metal point) and a ring (ground). In order to reduce the ringing, you should connect the metal ground ring (usually an attachment is provided with the probe) to ground as close a possible to the chip ground, and then measure directly on pin 14 with the tip of the probe. This eliminates two wires (the ground and your signal wire) from the measurement path, thus reducing the inductance from the wires and improving measurement results.

The fifth harmonic is almost 50MHz, which is as I say getting quite high - 80MHz for the seventh harmonic is even higher. So careful measurement is required to get good and accurate readings.

As to where the clock signal is coming from, the clock out pin (P14) of the ATMega is a buffered version of the internal clock which comes from the crystal causing an inverter to oscillate at a given frequency.

Not the answer you're looking for? Browse other questions tagged atmega clock atmel or ask your own question.

6
Troubleshooting an ATMega328p clock setting
2
System Clock Ringing
4
ADC strange behavior (ATmega)
2
Help for Changing the ATMega328's clock source to External Clock
2
Using PWM output from ATMega to provide external clock to external 3.3V device
1
How do you change clock source dynamically on an ATtiny1634?
5
How to get 8MHz square signal out a pic18f45
1
How to accurately measure 16MHz clock with Oscilloscope