Is a gate resistor needed on a 2n7000 mosfet when driven by a 4543 BCD for multiplexed led display?

I have a multiplexed common-anode LED display (7-segment) that is using a 4543 BCD with segment outputs connected directly to the gate of 2n7000 n-channel mosfets (no gate resistor). Mosfets are switched on/off around 320x per second (320hz) due to multiplexing of the displays. One digit is lit at a time. The segment load (to light the led) being switched to ground by the mosfets is only around 10mA. 5v logic levels are used. PCB traces between 4543 outputs & mosfet gates are probably longer than ideal (several inches in length). The displays are working fine with this setup, I've not seen any issues.

My question is.. am I okay without a resistor on the mosfet gate?

Reading up on the subject I've found a mixed bag of opinions. Everything from how it's good practice to always have a gate resistor to it not being needed if it's a small signal mosfet with low gate capacitance, switching a small load, and being driven by something with limited current to supply the gate. The 2n7000 has a Ciss of 50pf, the 4543 can supply a max of 2.5-3mA per output, the load being switched is about 10mA. So that would seem to fit the bill. But I've also seen discussion of parasitic oscillation, ringing, EMF, etc that can happen without a gate resistor & wanted to get a better idea of things.

UPDATING WITH SOME PICS

Oscilloscope probe at the mosfet gate: 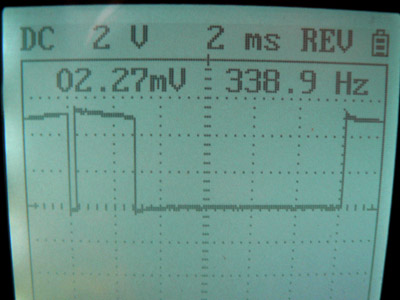 Red arrow on the waveform that's "zoomed in" on in the 2 pictures following this one. 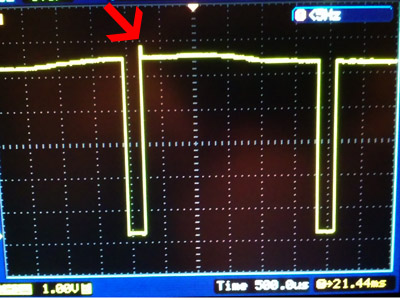 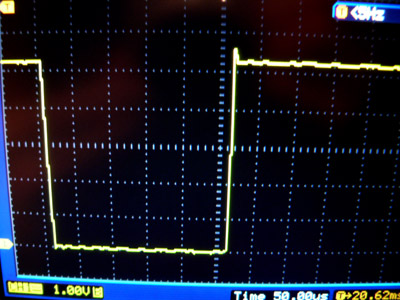 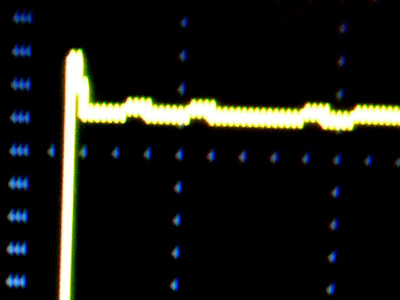 I really wouldn't worry about it with only 10mA being switched. The output resistance of the 4543 will prevent any tendency for common-drain oscillation.

Just make sure you have a reasonable bypass capacitor (10n to 100n) on the 4543 supply and make the layout halfway decent and you'll be fine.

Using a relatively large value (like 10K) would slightly reduce EMC by making the transistors switch more slowly, but unless this is a display for a very sensitive instrument it's not going to be all that important. It might also cause you some problems with 'ghosting' that could require code changes.

75
When is a MOSFET more appropriate as a switch than a BJT?
2
Calculating gate resistor value for enhanced active-region stability
4
Solenoid doesn't actuate when driven through MOSFET
0
2N7000 behaviour explanation
9
Paralleling Mosfets: Can I use a common gate resistor, or do I have to use a separate one for each mosfet?
0
How to calculate MOSFETs gate resistor?
0
Microcontroller driver the gate of a mosfet with a pull up resistor to 12V
0
How to use MOSFET as an active load resistor?
1
Do I need a gate resistor and/or a pull-down resistor for a TC4420 (or any gate driver) driving a MOSFET?