I was under the assumption that electret microphone capsules do not require any phantom power an can be connected in the same way dynamic microphone capsules can be, due to the fact that they contain a small permanent static charge built in. I am trying to build a really simple mic to hook up to my computer via the 3.5mm mic jack, and after wiring everything up, it doesn't seem to be working. Is this because there is in fact supposed to be some sort of phantom power circuit, or should I just double and triple check my wiring again?

Electrets don't need phantom power for the diaphragm, but the small capsules usually have a FET buffer inside which needs bias voltage. This can of course be derived from a phantom power source if necessary.

Here is a typical electret circuit: 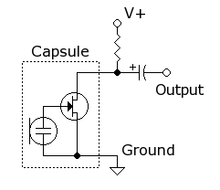 The value of the resistor is usually between 2k and 10k (cap say 10uF or higher) The datasheet for your capsule will probably give recommended operating conditions.

Here's a good link on simple electret circuits.
Another page with some more advanced ideas.

They need a supply as they have a built-in FET buffer.

"Phantom power" is not the same thing as "DC bias" for a condenser mic. The former is like power over ethernet, or USB, it's riding on the data or analog lines for the purpose of operating circuits, like an LED or a circuit to power a USB extender, or to power a preamplifier for a 'condenser mic', for example.

DC bias for a bare condenser mic is a completely different thing, as the capsule has a capacitor with a moving plate and some of that DC voltage (note I did NOT mention 'power', because it's a voltage device, not a current device) is there to keep a charge on the capacitor, so when the moving plate vibrates, electrons are forced off the plate or more must be added to keep the physics of the static charge and the distance solved. That's how the mic creates the voltage signal. The capsule also has a FET buffer, and it converts the high impedance capacitor to a low impedance output across the FET terminals (Drain and Source).

Phantom power is anything but "phantom", as it's generally 40+ volts and has considerable current capacity to drive circuits and amplifiers. Whereas, DC bias is generally under 10V, mostly around 2.5-3.0 VDC, has little or no current capacity.

I have done my final year project using this electret condenser mic. The gain of the output voltage the mic is so low and so the output is only around 5mV. So you need to implement a mic pre-amp circuit.

Check your (PC's) mic jack is rigged to bias an electret's internal FET by exposing its conductors (eg. 3.5mm extension cable) and holding any skuzy old red LED against them (LED cathode [usually large part of the light element] to ground obviously). If it glows steadily it can only indicate bias power: no standard high impedance capacitative ac amp' input could do that. (Luv+hugs, mc)

Check the electret is wired correctly in terms of polarity +/- if it's the type that has a built in preamp in the module. This is usually indicate by the colour of the lead,red to +ve/tip, black to -ve/earth. If it isn't one with a built in preamp then you need to connect the connection that is also connected to the case to earth. You can check which it is by using a test meter from the case to the two connections in turn. The one that give 0ohms is the one to connect to earth.

13
Electronic aspects of iPhone 3.5mm audio output
-1
What is the easiest way to filter engine and wind noise while keeping useful frequencies and speech?
1
Split any headphone with remote control and mic into Mic TRS+ Headphone TRS+USB